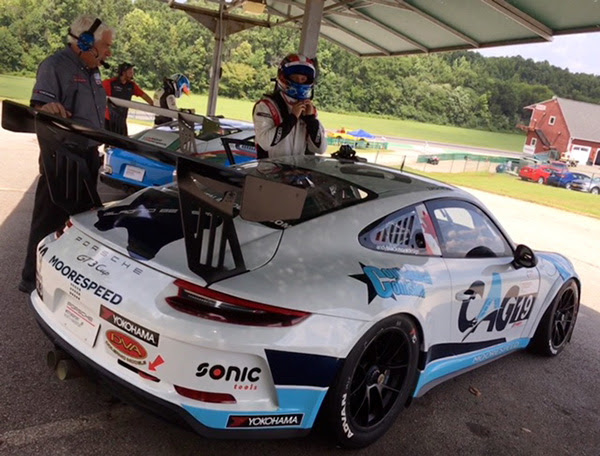 DANVILLE, Virginia (August 17, 2018) – Ready to pick up right where they left off after a dominating, double-win debut together two weeks ago at Road America, Zach Robichon and Moorespeed put in a pair of productive practice sessions Friday in the No. 19 CAG/Moorespeed Porsche GT3 Cup on the opening day of official competition for this weekend’s IMSA Porsche GT3 Cup Challenge USA by Yokohama doubleheader at VIRginia International Raceway (VIR).

The first three events on the schedule – Road America, this weekend at VIR and September’s doubleheader at Sonoma Raceway – are all first-time tracks for Robichon, a French-Canadian driver from Ottawa.

“This is one of those tracks that everybody loves,” Robichon said. “I have talked to a lot of people that have said VIR is their favorite track, a bit like Road America, and right off the bat, you can understand why. It has a lot of really cool places, it doesn’t have quite the same speed, not as many fast corners like we have at Road America, so the driving is a little bit different.”

Robichon’s first-ever laps on the 3.27-mile VIR road course were turned in yesterday’s unofficial test session in the CAG/Moorespeed No. 19.

“We had some issues on Thursday, but I think we learned from it,” said Moorespeed President David Moore. “I would rather have things not go right on a practice day than during race day. I feel pretty good that it happened to us when it did. We turned a negative into a positive and are moving forward.”

“Most people who are active in racing and have my best interests at heart have been very supportive of adding some Porsche GT3 Cup USA races to my schedule,” Robichon said. “I am a big believer in that every time you are in a car you are going to learn something. Having the opportunity to do the final four GT3 Cup USA races with Moorespeed I think will make me better in the Canadian series. Every lap is new knowledge you can use.”

“Zach is still learning the track, but he took to it like I thought he would,” Moore said. “It’s a driver’s track and he is a driver, so we’re approaching in a way where he is making some refinements here and there. I feel pretty comfortable about the progress we have made so far.”

Robichon, in turn, gives credit to Moorespeed for getting him quickly up to speed in his first visits to U.S. race tracks.

“Having a good team around me like Moorespeed to help me learn these tracks has been really important for me,” Robichon said. “We will just keep doing what we have been doing and we’ll get back to the front. So far at VIR, the car has been really good. I have gotten up to pace relatively quickly, we are getting comfortable with the track, there are still a couple little things that I want to change, but the first impressions are great.

Saturday’s IMSA Porsche GT3 Cup USA schedule at VIR begins with a 15-minute qualifying session at 8 a.m. EDT to determine the grid for the weekend’s first 45-minute race later that day from 11:20 a.m. to 12:05 p.m. EDT.

Sunday’s second and final race of the weekend is scheduled to go green at 9:15 a.m. EDT. Both the Saturday and Sunday races can be viewed live on IMSA.tv.

– Robichon has no reservations about taking on additional races with the Canadian title imminent. “I don’t think it’s a bad thing,” Robichon said. “Of course, some things could happen, but that’s racing. I mean, I could fall off my bike tomorrow too. If you are living your life trying to protect certain things, then you are not really living your life. So, for me, every weekend we are going out, having fun and learning some things. The more racing the better.”
Recent Posts
Categories
Read Previous