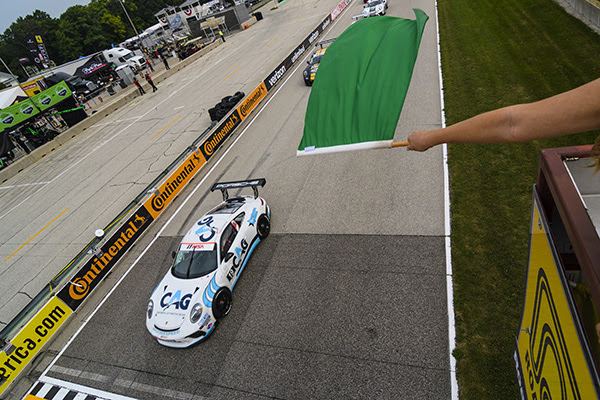 The new partnership pairs up one of the fastest Porsche GT3 Cup drivers in North America with a Moorespeed team that was amid a breakout and winning season with fourth-year team driver Will Hardeman earlier in 2018.
Hardeman stepped out of the CAG/Moorespeed No. 19 for personal family reasons earlier this summer but Robichon was recently signed to the team and responded with the dominating weekend in his Road America debut.
“I am really happy with the result,” Robichon said. “We just kept the momentum going, kept our head down and pushed ahead. Really happy with the weekend, and we are going to use this going into the next races.”
Robichon also set the fastest race lap in Sunday’s sprint with a top time of 2:12.504 (109.979 mph) on Lap 5.
“We made a very small adjustment on the car,” Moore said. “It gave us a little more consistency, just tightened it up a little bit, and you could see the lap times were super consistent. We knew if we could get through Turn 1 and Turn 2 Zach would be in clean air up front while everybody else was fighting. We knew we could get some time if we kept our nose clean, took one corner at a time, and worked on just the basics. Zach just put his head down and didn’t really make a mistake the whole race and weekend. It was a complete package today. I am really proud of the team.”
Next up for Moorespeed and Robichon is the IMSA GT3 Cup Challenge USA by Yokohama is the doubleheader weekend at VIRginia International Raceway (VIR), August 17 – 19.
“The next two tracks I’ll go to with Moorespeed I have never been to,” Robichon said. “I had never been to Road America either, and everything went well, but that doesn’t mean that’s going to happen next time. We are starting at scratch for the next one, this weekend’s now done, we will put it aside and focus on the next one.”
In addition to VIR in two weeks, Moorespeed and Robichon will participate in the season-ending events at Sonoma Raceway, September 14 – 16, and Road Atlanta, October 10 – 13.
Noteworthy
– The only thing better for Moore than another Road America sweep might be to see Hardeman and Robichon co-drive to a win in an IMSA WeatherTech SportsCar Championship GT Daytona (GTD) car. Moore is working hard on making that vision a reality in the near future. “We really missed our buddy Will today, but we are looking ahead,” Moore said. “Will is still a driver and much more on our team, and we are really behind Zach. We hope to do whatever we can to help Zach get into the Porsche family on a permanent basis and at the next level. That’s our goal with Zach, to really help his career, and he showed this weekend what he is capable of doing.”
– Moore’s memorable race this weekend at Road America came 30 years after he began his professional motorsports career on the four-mile Elkhart Lake track in August of 1988. “This weekend was special for me personally,” Moore said. “It’s 30 years to the same week that I started my professional motorsports career here at Road America. Lots of good times and wins here, some heartaches too, but this weekend was extra special. The mystique of this place, the people, the town, it’s just old school and a great track that is fun to drive. It’s a really cool place.”
Recent Posts
Categories
Read Previous