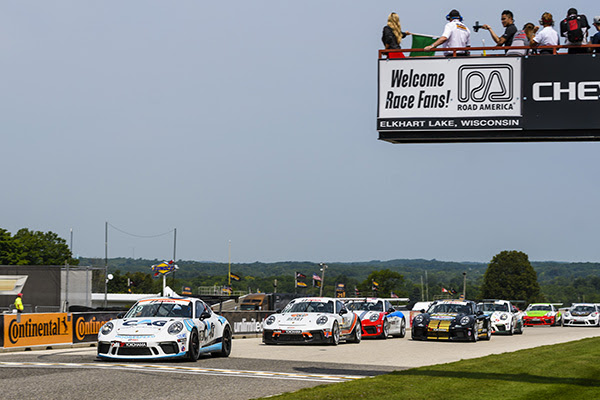 ELKHART LAKE, Wisconsin (August 4, 2018) – Zach Robichon made the most of his debut at both Road America and with Moorespeed on Saturday, winning the opening IMSA Porsche GT3 Cup Challenge USA by Yokohama 45-minute sprint of the weekend in a flag-to-flag romp from the pole in the No. 19 CAG/Moorespeed Porsche GT3 Cup.
The victory marked a successful return to IMSA Porsche GT3 Cup Challenge competition for the Continental Auto Group (CAG) and Moorespeed, which is running the year’s final four race weekends with Robichon after missing late June’s doubleheader at Watkins Glen.
The new partnership pairs up one of the fastest Porsche GT3 Cup drivers in North America with a Moorespeed team that was amid a breakout and winning season with fourth-year team driver Will Hardeman earlier in 2018.
Hardeman stepped out of the CAG/Moorespeed No. 19 for personal reasons earlier this summer but Robichon was recently brought in to fill the seat and responded with today’s dominating debut victory.
“It’s very rewarding,” said Moorespeed President David Moore. “Everything came together from day one when we flew Zach down to our Austin race shop to meet with me, work together and get on our simulator. We bonded right away, just got on the same page, and the whole team has always been that way. It was hard to not be at Watkins Glen with Will Hardeman, but we did the deal for Zach to fill his shoes and run out the season. It has been a nice shot in the arm bringing Zach in, but it was a team effort to get the win today.”

After winning the pole in Friday’s qualifying session, Robichon took control of Saturday’s race from the drop of the green flag. He led every race lap, steadily pulled away from the competition throughout the 45-minute sprint and then successfully defended his lead in a near-perfect restart after a full-course caution with just five minutes remaining.
“It was a tough race out there,” Robichon said. “It definitely wasn’t as easy as it might have looked. It was hot out there, this is a new track for me, and it is a high-degradation track for the tires. At the end of the race the tires were starting to hurt a little bit. We were pushing the whole lap trying to build that gap. At the same time, I had it in the back of my mind to keep some tires underneath me in case there was a restart, and that came to fruition.”
Robichon’s lead of more than 10 seconds was erased with the late caution, but he masterfully managed the field behind him in the uphill run to the start/finish line on the restart. He kept the No. 19 just in front of the competition in the race’s closing minutes and then had the victory sealed when a two-car on-track incident minutes later ended the race under caution.
Robichon’s flag-to-flag victory is Moorespeed’s third-straight pole-to-checkered sweep at Road America. Last year on the 4-mile road course, then Moorespeed driver Corey Fergus swept both weekend’s races from the pole.
A native of Ottawa, Canada, Robichon is leading the 2018 IMSA Ultra 94 Porsche GT3 Cup Challenge Canada by Yokohama championship with a season-high seven race wins in eight rounds this year. He has a cautiously comfortable lead in the GT3 Cup Canada point standings and, with just two race weekends remaining, was able to add the final four GT3 Cup USA races to his schedule.

“The guys from Moorespeed put together a fantastic car,” Robichon said. “It was the class of the field, all I had to do was push the buttons and turn right and left. They put the car together, and the credit goes to them because I wouldn’t be here without them.”
Robichon was perfect in both the main race start and the late restart just minutes from the finish.
“You can rehearse starts a thousand times and it is never going to go the way you plan,” Robichon said. “With experience, you can sort of guess and try to follow a plan, and if there was a plan that could be executed, both of those starts were perfect. I can’t say I predicted they were going to go like that, but I had an idea of where I was going to be strong. I really focused on getting good acceleration to keep them behind me.”
Sunday’s final IMSA Porsche GT3 Cup USA 45-minute race at Road America is scheduled to go green at 9:40 a.m. CDT and can be viewed live at www.IMSA.tv.
“One more tomorrow,” Robichon said. “We’ll make a few changes and go out and do it again.”
Noteworthy
– Hardeman cut short his 2018 driving schedule to 100% focus on unexpected personal issues within his family, but he is still very much a part of the CAG/Moorespeed team. “Will contacted me three or four times yesterday and each day I have given him a 30-minute debrief over the phone,” Moore said. “He is still a big part of the team and came over when Zach came to town and worked with us on the simulator. Even yesterday, while Zach was qualifying, Will did a qualifying sim back home. He’s a competitor, we miss him, and continue to wish the family the best, but I think today was a good way to say ‘thank you’ and take a win for Will and the family.”
– Following the Road America weekend, Moorespeed and Robichon will next compete in IMSA Porsche GT3 Cup USA Rounds 11 and 12 at VIRginia International Raceway (VIR), August 17 – 19, Rounds 13 and 14 at Sonoma Raceway, September 14 – 16, and the season-ending pair of races at Road Atlanta, October 10 – 13.
Recent Posts
Categories
Read Previous

Zacharie Robichon Steps in For Will Hardeman in No. 19 CAG/Moorespeed Porsche GT3 Cup