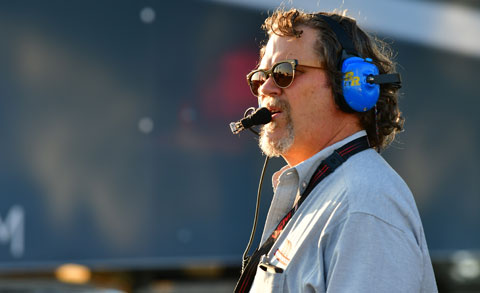 David Moore, President of Moorespeed, received his B.S. in Architectural Engineering with a minor in Mechanical Engineering from the University of Texas.  A love for sports cars found him leaving Construction Management to pursue a career in racing. However, the education and experience gained has proven invaluable in the ultra High-Tech field of Road Racing.  He began his career in the Automotive field at Norwood Ferrari as Project Engineer in the late 1980’s. He gives “Uncle Bob” much credit for the experience and knowledge attained under his tutelage.  A highlight of his career is due to his time with Bob where the two had been courting Oldsmobile during the development of the A-12 super car project which led to David being a Driver and Engineer for the Aurora Oldsmobile Aerotech, which shattered 47 International Speed Endurance Records.  The experience gained in this grueling World Record run has proven instrumental in providing an extra edge and attention to the details to be successful.

In the mid 90’s, After founding Memphis Speedwerks with Mike Wilkes, David led his first pro racing team with the infamous “Tiger” Porsche 911 RSR sponsored by Exxon Superflo and Autozone.  Later, he was Crew Chief for MCR’s Carolina Turkey Riley Scott Ford WSC team, Davies Racing Porsche GT2 Evolution, Team Manager for Kevin Buckler’s The Racer’s Group ALMS GT3 Porsche team as well Konrad Racing during 1998 24 Hours of Daytona.  But Texas and family called him home back to Austin where he and brother Chris formed Moorespeed.  In 1999, 2000 & 2001, took the company back into pro racing yet again in a Porsche supporting Peter Kitchak’s Toad Hall Motor Racing Porsche 911 RSR in the classic Speedvision World Challenge GT racing series, winning the Manufacturer’s Championship and finishing 2nd in the Driver’s Championship in 1999.

After Sept 11, 2001, David began diversifying the company where Moorespeed became a respected leading independent workshop specializing in Porsche & Ferrari road car service, bespoke builds and world class restorations as well as a successful vintage racing program that ran in HSR, SVRA, Historic Ferrari Challenge, and invitational events such as the Goodwood Festival of Speed and Revivals to name a few.

In 2012 after the announcement of Circuit of the Americas coming to town, David took the company, along with friend and mentor Price Cobb, back into pro racing for ten years competing in the IMSA Porsche GT3 Cup and Carrera Cup series specializing in developing drivers for the top ranks of professional road racing.  After another ten year run in pro racing, with many victories, Moorespeed was considered one of the top Porsche Driver development programs in the United States.

In December 2021, a difficult decision was made to retire from the arduous life on the road competing in pro racing.  Time to pass the torch and refocus spending quality time with wife Tonya Noble-Moore, friends, family and staying home working with the team at Moorespeed bringing his personal touch back to help fulfill our established clientele’s automotive needs. 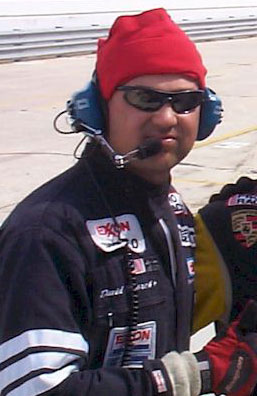 Chris Moore, Vice President of Moorespeed, came on board in January of 2002. By doing so, he fulfilled his childhood dream of owning his own company and working with his brother. Prior to working with Moorespeed, Chris dabbled in the computer field, but then decided to pursue a Law Degree. He started by attending South West Texas University in pursuit of a Criminal Justice Degree, working his way through college at Thermon Manufacturing as an R & D Quality Control Engineer.

He graduated from SWT with a B.S. in Criminal Justice in 1996. He was preparing for the next step, Law school, when an opportunity came he could not pass.

Rather than going to law school, he took a chance and accepted a job at a Dot.Com company.

Chris was the first employee in this company, working for 6 years as the Director of Information Technology for TradeCast Financial Trading Systems in Houston, Texas. The Ameritrade Corporation purchased the company in 2001, and he became the Director of Information Technology for Ameritrade’s TradeCast Professional Trading Division.

Besides being an owner of Moorespeed, Chris also owns CNS Network-Texas, Inc., a computer and network consulting firm based out of Houston Texas www.network-texas.com, and has been supporting Houston, Austin, San Antonio & Dallas area clients since 2002.

Chris and his wife Cathie have two beautiful daughters, Katie and Allison and two little boys, Austin and Case.

You can find Chris & Cathie most weekends mountain biking, road riding through Texas, playing tennis and enjoying life with their kids. Cathie and Chris are excellent tennis players and avid mountain bikers and road bikers. Every year, Cathie and Chris participate in the MS150 to help raise money and awareness for Multiple Sclerosis.