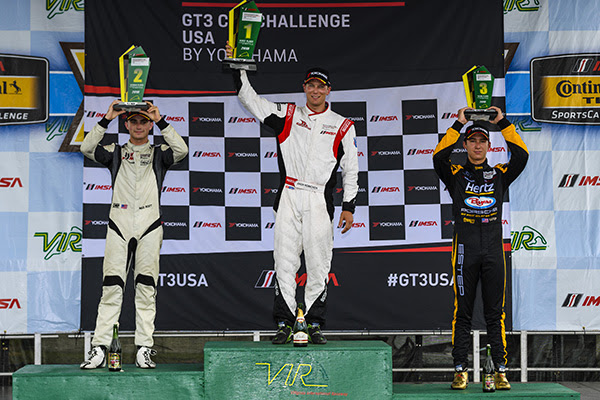 Another Flag-to-Flag Sweep from the Pole for Robichon and No. 19 CAG/Moorespeed Porsche GT3 Cup Team

The convincing win was the third-straight victory for Robichon and Moorespeed in as many races after sweeping both rounds of the IMSA Porsche GT3 Cup weekend at Road America two weeks ago.

“From the word go the Moorespeed Porsche was very good,” Robichon said. “The track was a little unique in the different rubber compounds that some of the cars in other series had laid down. It took some getting used to in the first few laps but right when our tire was starting to get better it seemed like everybody else had their tires start to fall off. Right when we got to the peak, tires came into play, and the car was just really good for the last 30 minutes.”

Moorespeed and Robichon have teamed up for the final four IMSA Porsche GT3 Cup USA doubleheader race weekends of the year and so far, are undefeated in the No. 19 CAG/Moorespeed Porsche GT3 Cup.

“I feel really good but I feel fortunate too because so many people were going off,” said Moorespeed President David Moore. “Zach just drove a really smart race again, and from the start in clean air, he just built and maintained a gap. It was just a really well-run race by Zach for sure. I don’t think he put a foot wrong anywhere, very consistent, and the team did a good job giving him the car. It all came together, we had some little struggles on the Thursday test day, but our execution plan is to peak in qualifying and hold it. That’s what we were able to do today.”

While Robichon has yet to be challenged while leading an IMSA Porsche GT3 Cup USA race in his three race starts with Moorespeed, he did encounter lapped traffic for the first time at the wheel of the No. 19 in Saturday’s race.

“Traffic is traffic,” Robichon said. “A lot of tracks, you can easily get out of the way, or you can easily be aware of what’s going on around you, but at this track, that’s not the case. There’s a lot of combination corners, one into the next, and if you get caught up behind a car going into one of those sequences there is nothing you can do. It’s up to me to get by them, but I was playing it pretty safe.”

Sunday’s second and final 45-minute race of the weekend is scheduled to go green at 9:15 a.m. EDT and can be viewed live on IMSA.tv.

“We might make a couple changes to the car,” Robichon said. “Just little minute things, tire pressures and what not, because you can always get better. There are always improvements you can make but for the most part, the car has been great all weekend.”