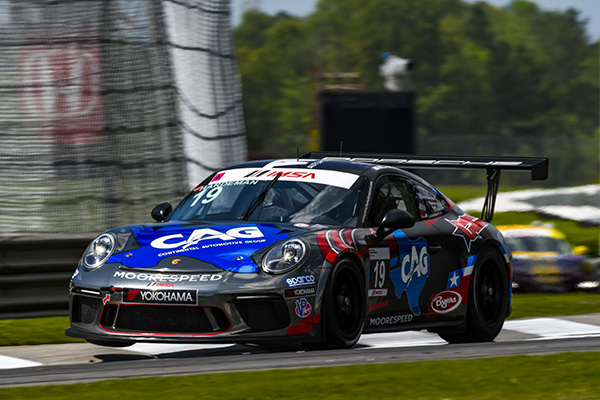 BIRMINGHAM, Alabama (April 23, 2017) – Moorespeed team driver Will Hardeman matched his career-best IMSA Porsche GT3 Cup Challenge USA by Yokohama race finish at Barber Motorsports Park on Saturday with a runner-up showing in his No. 19 CAG/Moorespeed Porsche GT3 Cup in the first 45-minute race of a doubleheader weekend on the Alabama road course.

After he and teammate Corey Fergus, driving his No. 00 US LED/Byers/Moorespeed Porsche GT3 Cup, qualified third and second, respectively, earlier on Saturday, Hardeman jumped up to second place on the first lap of that afternoon’s race.

Although he never got close enough to make a move on the leader, Hardeman defended his position to the checkered flag. The runner-up result matched the second-place finish Hardeman earned at last year’s season-ending race at Road Atlanta.

“I was really on it and pushing hard for the most part,” Hardeman said. “I had a really comfortable pace and placing on the podium, right where I deserved to be and looking toward the top step. This is a rhythm track but has some technical sections that we were able to figure out. We put it up on edge through most of the track.”

The podium result was the second of the year for Moorespeed after Fergus finished third in the final race of the season-opening doubleheader last month at Sebring International Raceway.

After qualifying second – one spot ahead of Hardeman – on Saturday morning, Fergus appeared to be in a position to earn another podium finish. Some questionable race-start tactics by the pole-winning driver, however, caught Fergus out and Hardeman slipped by for second. Fergus ultimately finished Saturday’s race in fourth place.

“After qualifying second and third, it would have been nice to have both guys up on the podium on Saturday,” said Moorespeed President David Moore. “Will ended up second and Corey was fourth, but we’re on pace, the crew is working really hard and we feel pretty confident.”

A major departure from Saturday’s sunny and dry conditions, Sunday’s second and final 45-minute race was run in rainy and damp conditions. Hardeman started second and Fergus rolled off from fourth as the race, after several exploratory laps under caution, finally went green.

“Today was not what I expected,” Moore said. “We knew it was probably going to be a wet race, and we had two different setups on the cars because we have two different driver styles. Will was pretty happy with his setup early on, Corey wasn’t as happy and was having trouble getting the car to turn in.”

Racing competitively but cautiously, both Moorespeed drivers lost positions in the early laps but raced in the lead pack for the entirety of the race.

With Hardeman in third and Fergus in sixth, a late restart following a lengthy caution period saw the race resume with just minutes left on the clock. Hardeman got side-swiped by one competitor in the frantic fight to the finish, which allowed several others to pass, including Fergus.

“Will was in third place, and did have a wounded car from some contact, and on the late restart he just couldn’t get traction,” Moore said. “He just didn’t get the drive off the corner and those guys got a run on him. That’s what dropped him from third to sixth place.”

Fergus crossed the line in fifth place to end the weekend with a pair of top-five finishes.

“We were hoping for better finishes than fourth and fifth after qualifying second for the first race,” Fergus said. “I guess you just have to take some points when you can. Not every weekend is going to be your best. It got a little hairy today in the restart at the end but Saturday was worse for me. I got hit on a restart and salvaged fourth-place yesterday, I got a little lucky with that and figured it out yesterday. Today we just missed the mark big time. We just didn’t have the pace, a little bummed about that, but we will just move on to the next one.”

Racing in the lead pack in the rain for the first time, Hardeman learned a lot on Sunday.

“Today wasn’t my best performance,” Hardeman said. “It was more of a learning experience. The take away is that this is a lesson learned on where to find the limits when you are running in the rain. There’s too fast and there’s too slow, and we were erring on the side of too slow and too conservative.”

Next up for Moorespeed is the team’s and Hardeman’s home race at Circuit of The Americas, May 4 – 6, where the IMSA Porsche GT3 Cup Challenge USA by Yokohama will run a Friday-Saturday doubleheader.

– Saturday’s second-place finish was the earliest in a season Hardeman has finished on the podium in IMSA Porsche GT3 Cup competition. “For my confidence, and for setting the tone for where my goals are for the rest of the season, it’s important to establish I have the speed to contend for the top step of the podium,” Hardeman said. “Plus, we have sent a message to everyone in the paddock and got their attention.”

– Moore and Hardeman jumped right into discussing the nuances of today’s wet-weather race after it was over. “Will called and told me after he left he’s not happy at all with his performance today,” Moore said. “He realizes what he did, he didn’t follow the fundamentals of the rain line, he said he knows better and is better than that. The only reason his car had any damage was because he let himself run back in the pack. Hard lessons are the best ones, and he said it won’t happen again. I am proud of him for owning it.”