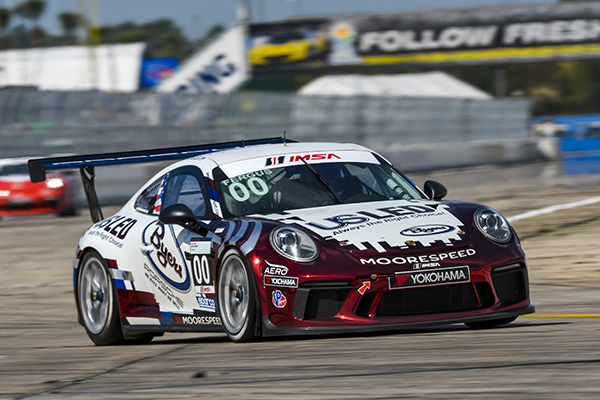 SEBRING, Florida (March 18, 2017) – Debuting Moorespeed driver Corey Fergus finished third Friday in his No. 00 US LED/Byers/Moorespeed Porsche GT3 Cup in the second and final round of the season-opening IMSA GT3 Cup Challenge USA by Yokohama doubleheader at Sebring International Raceway.

After a challenging first round of the weekend on Thursday that saw third-year driver Will Hardeman finish eighth in the No. 19 CAG/Moorespeed Porsche GT3 Cup and Fergus 10th, both drivers had much better races in Friday’s final 45-minute sprint.

Starting fifth, Fergus stayed with the lead pack from the drop of Friday’s green flag. He was soon joined in the top five by Hardeman who made up several positions from his eighth-place starting position in the opening laps of the race.

“The first race made it clear to both our guys they should never forget how bad it feels to underperform and learn from it,” said Moorespeed President David Moore. “In Friday’s race they both performed more to where I thought we would be in the first race. They ran P3 and P4 most of the race once the start settled out.”

Fergus rebounded well from the Thursday disappointment for the Friday podium result in his first race weekend with Moorespeed. He was third overall and in the top-tier Platinum Cup class.

“Friday was a much better day for us,” Fergus said. “This is where we hoped we would be and feel we should be. It’s such a good result and just gives us good momentum for the season. I was able to stay up front and fight with those guys, which was a lot of fun, a lot of close racing.”

Although Fergus was in the position when it counted, Hardeman spent the majority of the race running in third place.

“I passed Corey and Scott Hargrove pretty early in the race,” Hardeman said. “It was just kind of smooth sailing and clean air after that but then I came into Turn 17 with a little too much entry speed. I trotted out into the outside marbles and just skimmed the outside tire wall. It knocked off my left mirror and damaged my wing but, somehow for the majority of the race, I was able to keep a respectable pace.”

Despite the visible damage, Hardeman held on to third for the majority of the middle of the race, most of the time with Fergus filling his mirrors.

“Will and I had quite the battle going on for 7/8ths of the race, I guess up until the last lap there, so it was a fun one,” Fergus said. “I was right behind him. I think with his wing damage he was obviously lacking down force coming into the high-speed Turn 17. He just started bobbling and wiggling, it took him out and he pushed into the wall. I ducked inside when he started pushing out.”

After hitting the Turn 17 for the second time just two laps from the finish, Hardeman gathered it up and was able to make it across the line in 11th place. 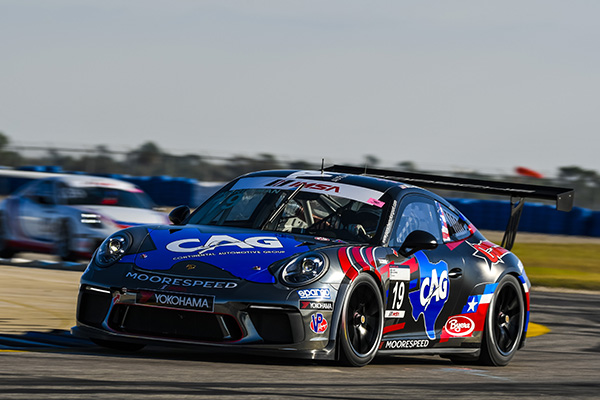 “I managed to keep everybody behind me for a long time and keep it respectable but, once again, I pushed a little too hard into Turn 17 on the second to last lap,” Hardeman said. “I just didn’t have the rear-end support and hit the wall pretty hard. It took the rest of the wing off and knocked my car pretty cockeyed after that. It was all my own fault and kind of another learning experience. To win these races you have to finish them.”

Fergus was the biggest beneficiary of Hardeman’s second setback at the end of the race.

“Will came rocketing up from eighth at the start and, if he hadn’t body slammed the tire wall at Turn17 and broke half his wing off, I thought he had a chance to catch the two leaders,” Moore said. “Once Will smacked the wall the second time, Corey’s patience and keeping clean paid off for his first podium in IMSA GT3 Cup. So, it was bitter sweet, very happy for Corey, heartbroken for Will.”

Next up for Moorespeed and the IMSA GT3 Cup Challenge USA by Yokohama is a new event weekend at Barber Motorsports Park, April 21 – 23.

– Moore and Moorespeed General Manager Price Cobb, the former 24 Hours of Le Mans race winner, like what they see with their newest driver. “Corey is just getting warmed up,” Moore said. “When he gets hot, look out. He is very methodical and conservative in his approach. Price is working really hard with him to bring out more of his real speed and race craft out as there is a fine line between being too conservative and too assertive. We have always thought Corey will be a contender for the championship and still do for sure.”

– Hardeman is also one step away from putting it all together in his third year with Moorespeed. “Focus is the key,” Moore said. “Will is clearly fast, but he’s so fast that if he misses his mark by any amount of distance – and I’m talking inches – he can get into real trouble in certain corners like Turn 17 where there is very little room for error at that speed. He’s so very close but still driving by the seat of his pants a bit too much instead of repeating his marks. When he can truly establish and simply just ‘repeat’ those marks he will be on the top step of the podium in any series he chooses I believe.”