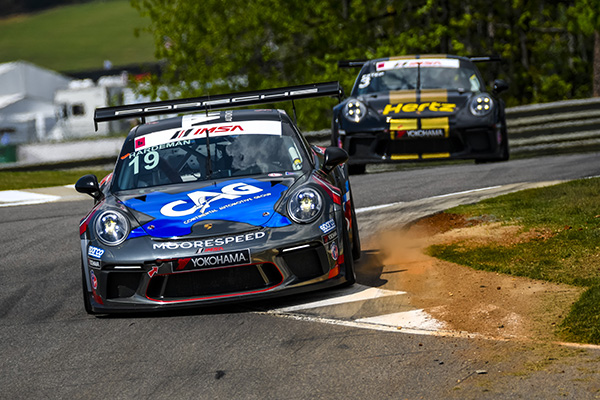 AUSTIN, Texas (May 2, 2017) – Austin-based Moorespeed and third-year team driver Will Hardeman are back home again this weekend for back-to-back IMSA Porsche GT3 Cup Challenge USA by Yokohama races at Circuit of The Americas (COTA), May 4 – 6, where Moorespeed and Hardeman will bring some COTA and 2017 podium momentum and a new teammate to the 3.4-mile road course.

The third event on the 2017 IMSA Porsche GT3 Cup Challenge USA by Yokohama schedule, the COTA weekend schedule will feature the usual lineup of twin 45-minute races. Race one is scheduled to start Friday at 6:40 p.m. CDT with the second round closing out the weekend’s schedule at 11 a.m. CDT on Saturday.

Hardeman and Fergus each scored a podium with Moorespeed in the span of 2017’s opening two weekends of competition in Sebring, Florida, in March, and two weeks ago at Barber Motorsports Park. Fergus finished third in Sebring’s second race while Hardeman matched his IMSA career-best finish of second, earned in the 2016 finale at Road Atlanta, in race one at Barber Motorsports Park.

Hardeman also went four-for-four in podium visits with Moorespeed at COTA last year, racing in IMSA Porsche GT3 Cup and the similar Pirelli World Challenge GT3 Cup series. The four third-place showings were then backed up by a top-10 finish later in 2016 at COTA when Moorespeed and Hardeman were guest competitors in Porsche’s premier Mobil 1 Supercup series during the U.S. Grand Prix Formula 1 weekend.

“I think we have had as good a shot as anyone at both Sebring and Barber Motorsports Park with either Corey or Will, and that we do again here at COTA,” said Moorespeed President David Moore. “We have some solid momentum with both of our guys. Obviously, we know COTA very well, but so do the other contenders who have tested here recently too. There is a really strong field in GT3 Cup this year, and we realize that we will have to focus extra hard to finish up front, maybe more than most, because it is our home track. We have the potential for a lot more distractions, and how we manage that will be important. We look forward to the challenge and we absolutely love to put on a good show for our family, friends and fans.”

In addition to Hardeman finishing second and Fergus posting a pair of top-five finishes, the Moorespeed duo qualified a solid second (Fergus) and third (Hardeman) at Barber Motorsports Park.

“We are super optimistic about coming into the COTA race weekend,” Hardeman said. “We have really been able to get these new Generation 2 Porsche Cup cars dialed in and have some of those home-track advantages going for us as well. During our last qualifying test there was a big focus on the finer points of qualifying, in order to maximize the speed and the lines of the car, as well as our setup. So, we expect to see good results in qualifying this weekend if we can put it all together again like we did at Barber Motorsports Park.”

Fergus is a native of Ohio but will be an honorary Texan and Austinite this weekend.

“Since we are not racing at my home track of Mid-Ohio, COTA is my home race this year as Moorespeed is from Austin,” Fergus said. “I’ve got my Porsche dealer principal, manager, technician and a few customers coming out to support me too. It should be a lot of fun. I’m certainly ready for my first win in the series and want to make it happen more than ever. Why not at our “home race!?”

A three-day weekend event, the IMSA Porsche GT3 Cup Challenge USA by Yokohama schedule at COTA gets underway Thursday, May 4, with practice sessions at 8:55 a.m. and 1:55 p.m. CDT. Qualifying is Friday at 10:15 a.m. CDT before that evening’s first 45-minute race of the weekend at 6:40 p.m. CDT. Saturday’s second and final race of the doubleheader schedule goes green at 11 a.m. CDT.

“Needless to say, we are pretty pumped that IMSA Porsche GT3 Cup Challenge USA by Yokohama is racing with the WeatherTech Championship here at our home track in Austin at Circuit of The Americas,” Moore said. “We have many fans, family and friends that are relatively new to road racing who are very supportive attending. We’d like to put on a good show for them on the track and hopefully make them proud.”

Both IMSA Porsche GT3 Cup Challenge USA by Yokohama races will be streamed live from COTA on IMSA.tv and will broadcast live online by IMSA Radio. Links to both sites, as well as live timing for every race, are available at www.IMSA.com.

– Moorespeed first met Corey Fergus during a test last year at COTA. “We met Corey at a pre-season test at COTA for Pirelli World Challenge, but I first met his father John ‘back in the day’ when he was still behind the wheel some 20-plus years ago,” Moore said. “It was kind of like a reunion for me, Price and John, which led to really good chemistry for Will and Corey right from the start. It later translated into Corey joining our team for 2017. We are really pleased to have these two guys together with us this season.”

– A longtime Austin resident and lifelong racer, Moore is a major proponent of building a motorsports road racing culture in the region. That includes hosting a major welcome party at the Moorespeed race shop early in each race weekend. “We are looking forward to giving back to our fans and will be hosting our 4th Annual IMSA Welcome Party at Moorespeed on Thursday night,” Moore said. “It’s a lot of fun to get everyone together and let the locals get up and close and personal with us and other race teams. The more we can help promote the road racing culture of Austin the better, in my opinion. We have over 600 RSVPs, so it promises to be another barn burner, and we hope our local fans can help us show our fellow racers a bit of Texas Hospitality while they are visiting.”