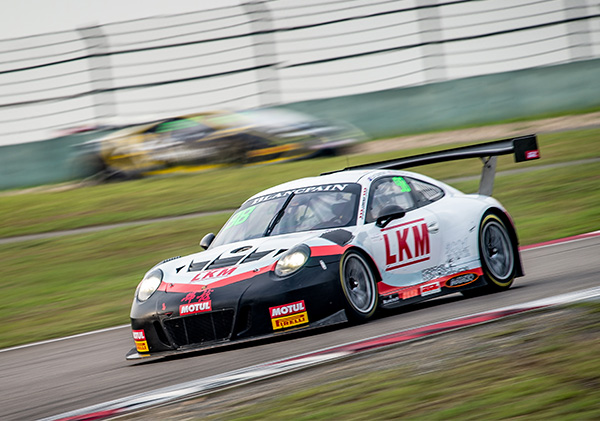 SHANGHAI (September 26, 2017) – Moorespeed’s Will Hardeman and two-time and reigning 24 Hours of Le Mans winner Earl Bamber made a successful co-driving debut this past weekend in the Blancpain GT Series Asia at the Shanghai International Circuit in China where the duo finished second in the Pro/Am class and fourth overall Sunday in the No. 98 Arrows Racing Porsche 991 GT3R.

“Blancpain GT is a really cool series where we get to race against all makes of GT3 cars, which adds another element of racing absent in our spec-Porsche IMSA GT3 Cup series in the USA,” Hardeman said. “There is a lot more give and take during the lap depending on strengths and weaknesses of varied brands of cars out there, and the Shanghai International Circuit is a really well built track with a ton of interesting and fun features.”

Capably handling wet conditions in Sunday’s rainy race, the podium result in part made up for a disappointing Saturday round for Hardeman and Bamber. Hardeman had an outstanding start in Saturday’s opener only to have the rear wing on the Porsche clipped off by a spinning competitor. Hardeman and Bamber brought the repaired Porsche home in 19th place after never having a chance to race with the leaders on Saturday.

That was far from the case in the Sunday finale, however, as starting driver Bamber quickly got down to business. After starting eighth, Bamber was racing in the top five in no time and handed the Porsche off to Hardeman in full contention for not only the Pro/Am class win but a possible overall podium too.

“Any time I go out of my comfort zone with a new series, new car and new track, in addition to wet and variable conditions, is the time when I get to experience the most personal growth,” Hardeman said. “Working with Earl Bamber is truly awesome, and it is special to see how the best in the business operate.”

Hardeman, the first American to ever compete in the Blancpain GT Series Asia, kept up the charge after taking over from Bamber. Racing as high as third overall and avoiding the slick conditions that took out more than one competitor, Hardeman ultimately crossed the finish line fourth overall and in the Pro/Am podium runner-up slot.

Bamber is best known for his perfect two-for-two overall LMP1 victory record at Le Mans, winning in his 2015 debut and this past June at Circuit de la Sarthe, but he also served as Hardeman’s driving coach for two seasons in the U.S.

“It was a great first weekend with the team in Shanghai,” Bamber said. “The championship lived up to be a great challenge, and the Arrows Racing team did a great job on strategy to bring us into play for a podium outright. Will did an amazing job in high-pressure situations. It was awesome to see his progress from when we first met two years ago.”

Moore made the trip to Shanghai where he was an active part of the Hardeman/Bamber effort and welcomed by the Arrows Racing team.

“This type of international and multiple driver race is something that Earl and I discussed as being a possibility for the future even a year ago,” Moore said. “We knew Will was and is still improving to be one of the better gentlemen drivers with a bronze FIA classification. It was only a matter of time within Will’s development, and Earl was instrumental in this by helping coach him to the next level in his second season, with the full blessing of Porsche.”

Hardeman has earned a string of top-five finishes in 2017 IMSA Porsche GT3 Cup competition, including a pair of runner-up finishes. The season concludes early next month at Road Atlanta where Hardeman will be seeking his first series win and his Moorespeed teammate Corey Fergus will be looking to lockdown season championship runner-up honors. Bamber will be racing at Road Atlanta too in his return to IMSA competition.

“In less than two weeks all of us will be racing at Road Atlanta,” Moore said. “Will joins Corey for the IMSA Porsche GT3 Cup finale, and Earl comes back to the USA too in Porsche’s GTLM program where he will be teamed with Laurens Vanthoor and Gimmi Bruni for Petit Le Mans. Earl will also be working with us, Price Cobb and the boys again there, helping coach them for a run on the podium. Road Atlanta is one of our very favorite tracks, so we can’t wait as our team is hungry.”

– The entire Shanghai experience went beyond the race track for Moore and other members of the effort. “To have this kind of ‘life experience’ with Will and his wife Anna, and Earl and Janine, was tremendous. The only thing that would have been better was is if my wife Tonya had been able to join us for the week. The most familiar aspect was the competition, it was fierce and was actually better than expected. But the biggest surprise personally was the sheer size of Shanghai and how many fans came out and supported the race, even in the rain. Porsche Motorsport Asia Pacific was very helpful to us as newcomers, as was SRO, which did a great job promoting the event.”