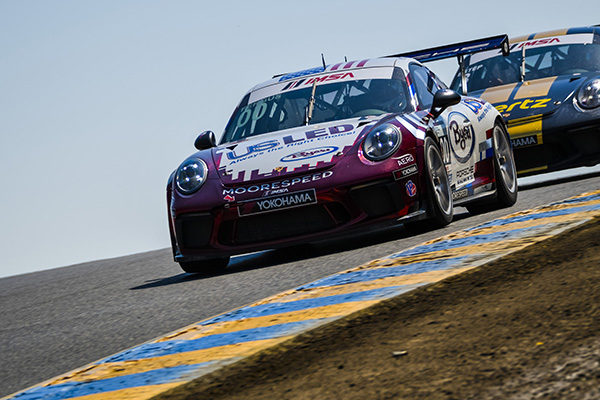 ATLANTA (October 4, 2017) – Moorespeed and team drivers Corey Fergus and Will Hardeman will close out a competitive season of competition in the IMSA Porsche GT3 Cup Challenge USA by Yokohama this weekend at Road Atlanta where Rounds 15 and 16 – the final races in this year’s championship – will be run in a Thursday/Friday doubleheader at the Motul Petit Le Mans, October 4 – 6.

Fergus and Hardeman have combined for a solid run of 11 podium finishes this year, a streak that has seen at least one Moorespeed driver on the podium at every IMSA Porsche GT3 Cup doubleheader race weekend this season.

The highlights include Platinum Cup race wins for Fergus in his No. 00 US LED/Byers/Moorespeed Porsche GT3 Cup at Circuit of The Americas (COTA) in May and a sweep of both races at Road America in August.

Hardeman has contributed to the podium run with race runner-up showings at Baber Motorsports Park in April and in late June at Watkins Glen International, matching the career-best second-place finish he earned for the first time last year at Road Atlanta.

“Preparation, testing and execution have been a huge part of our success this year, but without a doubt the single most important ingredient has been teamwork,” said Moorespeed President David Moore. “Racing isn’t an individual sport, and I feel we have assembled one of the best teams in the business to compete at the highest level.”

In his first year with Moorespeed, Fergus stepped up as a Platinum Cup class championship threat after his breakout victory at COTA. He comes to Road Atlanta second in the point standings in the Platinum division, the top-tier class in IMSA Porsche GT3 Cup.

“Our goal as a team, without a doubt, is to come away with two victories at Road Atlanta,” Fergus said. “Although the championship is out of reach, we can still fight for second and win races. It’s my second year in the Porsche GT3 Cup car and everything has started to click with it. Moorespeed has done a great job of preparing the car and made my job a lot easier on track. Everyone gets along great and we gel well together.”

In his third season with Moorespeed, Hardeman welcomed full-season teammate Fergus this year. The drivers work closely together at and away from the track which has complemented Hardeman’s expanded preparation and development program with Moore and the Moorespeed team.

“It would be amazing to end the season on a high note with a pair of victories,” Hardeman said. “I have been right there with the leaders all season, and it’s just a matter of putting together every aspect of a race weekend in order to get to the top step for me. I owe my success so far to the support of my wife and family, the Moorespeed team being in my corner, and David Moore putting in so much of his personal time into my development. David and I have a pretty good simulator rivalry going on this season which has pushed us both to be better.”

Moorespeed has been a contender at every IMSA Porsche GT3 Cup race weekend in 2017.

“At every event we have rolled into this season, victory has been realistic and is certainly our goal,” Moore said. “All we need to do is complete our homework, prepare as much as we can and then execute with no mistakes. We need to do a better job in qualifying. When we are on our game in qualifying we have been 100% on the podium top step. The competition this season has been fierce with five different teams winning. We definitely would like to finish on a high note.”

Even in a series filled with first-class and legendary racing circuits, the 2.54-mile-mile Road Atlanta road course stands out for the Moorespeed team.

“Road Atlanta is one of the best tracks in the country,” Fergus said. “I haven’t raced there since 2014 so it will be great to be back. It’s just an extremely fun track to drive, and we’re going to attack hard for the last two wins up for grabs. We’ll be smart about it for sure, but this feels more like a two race shootout than an end to a championship season. We’ve all worked so hard this season. There’d be no better feeling than proving that with a couple of wins.”

Hardeman has always been quick at Road Atlanta.

“A good lap time at Road Atlanta comes from keeping your rolling speed up in the super-high-speed sections,” Hardeman said. “You can’t be afraid to commit early to the power yet also respect the limits of the track as they can be unforgiving. Road Atlanta is very rewarding when driven well.”

Moore shares the enthusiasm his drivers have for Road Atlanta.

“Road Atlanta is my favorite track in all of motor racing. The secret to being quick at Road Atlanta is hitting your marks very precisely and not being afraid of bombing it through just about every corner, which requires huge commitment. You have to really study this track in great detail as it’s not easy by any means with a ton of changes in elevation and character.”

The Road Atlanta weekend gets underway with a track test session that begins this morning before the first official 30-minute practice of the event Wednesday afternoon at 4:30 p.m. EDT.

The Thursday, October 5 schedule begins with a 40-minute practice session at 8:55 a.m. before qualifying that afternoon at 1:05 p.m. EDT.

– Moorespeed’s 2017 podium streak is already at an even dozen when a recent second-place finish by Hardeman and two-time and reigning 24 Hours of Le Mans winner Earl Bamber is added to the tally. Reuniting with his friend and former driving coach, Hardeman joined Bamber two weeks ago at the Shanghai International Circuit in China where the duo raced in the Blancpain GT Series Asia. Hardeman – the first American to compete in the series – and Bamber co-drove to a second-place Pro/Am class finish and fourth overall in a No. 98 Arrows Racing Porsche 991 GT3R in Sunday’s second and final race of the weekend. “Our visit to China for the Blancpain GT Series Asia was a great experience where I got to learn in a foreign environment,” Hardeman said. “Ultimately, this is the type of thing that trains you to be adaptable and get up to speed no matter the conditions or type of car you drive.”

– Moore is well versed in the history of Road Atlanta. “Road Atlanta was built by the ‘seat of the pants’ from a bulldozer in only 30 days, using and exploiting the natural terrain of the area,” Moore said. “It’s what we call a proper old-school track and is not for the faint of heart. There are really only two slow places where you use second gear briefly, but even there you have to be super precise and patient to get a good, clean exit to minimize your lap time. No room for error, little time to breathe but rewarding like no other track when you nail a lap. Super fun.”