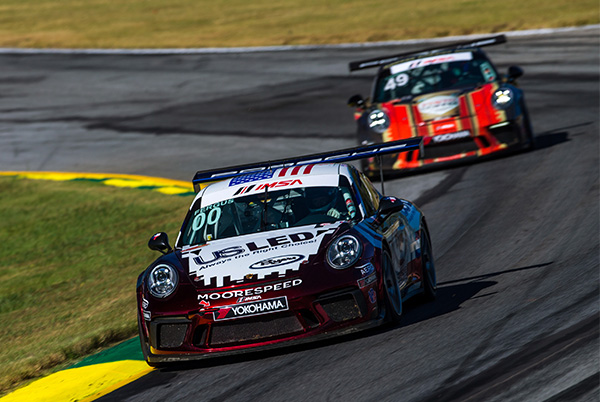 ATLANTA (October 7, 2017) – Corey Fergus pulled off a last-lap podium pass in the fast and famous downhill run to the start/finish line at Road Atlanta for a third-place finish in Friday’s season-ending IMSA Porsche GT3 Cup Challenge USA by Yokohama race at Road Atlanta.

The podium result was the 12th of the season for the two-car Moorespeed IMSA Porsche GT3 Cup team, which included a run of 10 top-three finishes for Fergus in the No. 00 US LED/Byers/Moorespeed Porsche GT3 Cup. The solid effort, which saw Fergus score three race wins, was enough for the first-year Moorespeed driver to seal second-place honors in the top-tier Platinum Cup class in his debut season in the ultra-competitive IMSA Porsche GT3 Cup Challenge USA.

“Man,” Fergus said. “That was probably the most exciting last lap of my entire life! To pass in the last turn on the last lap leading to the checkered flag in the last race of the season was exhilarating to say the least. Everybody on the team certainly deserves it. We’ve had a great season. I needed that 10th podium, double digits baby, and it’s just a great reward for the team working so hard this season.”

Fergus picked up a position to move to fourth at the race start but never got close enough on third-place runner McKay Snow to make a move until the final lap. Six car lengths behind at the white flag, Fergus reeled Snow in, pulled alongside him as they raced under Road Atlanta’s bridge turn, and then charged past in the downhill and right-hand turn to the finish.

The last-lap move also ensured Moorespeed’s streak of at least one podium finish in all eight of this year’s IMSA Porsche GT3 Cup doubleheader event weekends stayed perfect through the Road Atlanta finale. 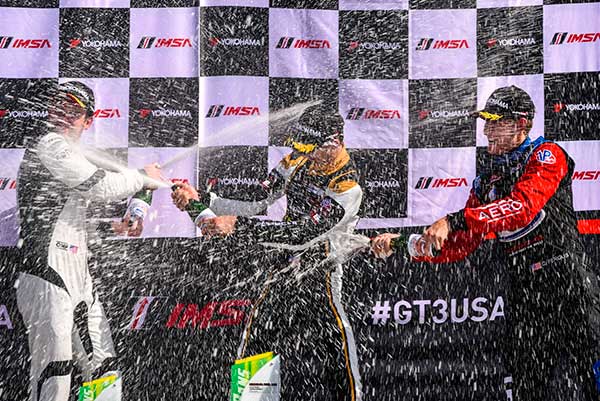 “Corey dropped the hammer at the last section of the track and kept our podium streak alive for the season, so that was really cool,” said Moorespeed President David Moore. “I’m really proud of him because he didn’t quit, stayed right there until he saw an opportunity, and then he took it. It is probably his best pass I’ve seen him make all season long. He did an over-and-under move and then just stuck it down on the inside coming down what is probably the most famous last turn in North America for the win. He stuck his neck out at the line to take the checkered, so it was pretty cool.”

In addition to the 10 podium showings by Fergus this season, third-year Moorespeed driver Will Hardeman contributed to the team’s even dozen run of top-three finishes with runner-up showings at Barber Motorsports Park in April and Watkins Glen International in late June.

Hardeman was looking for similar results at Road Atlanta but instead endured one of the most challenging weekends of the season in his No. 19 CAG/Moorespeed Porsche GT3 Cup. He retired in Thursday’s first race after an early skirmish punctured the No. 19’s radiator and was then caught up in an incident at the start of Friday’s race as the field came down to take the green flag.

“This year we showed a lot of potential all season,” Hardeman said. “There were some good moments, some highs and some lows, and for next season I think that we just need to build on the potential and clean up our game a little bit. To be a frontrunner in this series it’s more about being consistently up front and on the podium rather than inconsistency and the potential for some big mishaps as well.”

“Corey and Will started side by side on the grid in row three,” Moore said. “When the leader went for the green, they both went together side by side. The car ahead in fourth didn’t get a good start and was almost two car lengths back and out wide. That left the door open for Will and Corey, but then the other competitor turned all the way to the apex instead of staying wide like you normally do on the start. In my opinion, he was basically shutting the door on Will, who has beat him on numerous starts in the past. He spun, collected Will, and they both went off the track, with Will into the wall.”