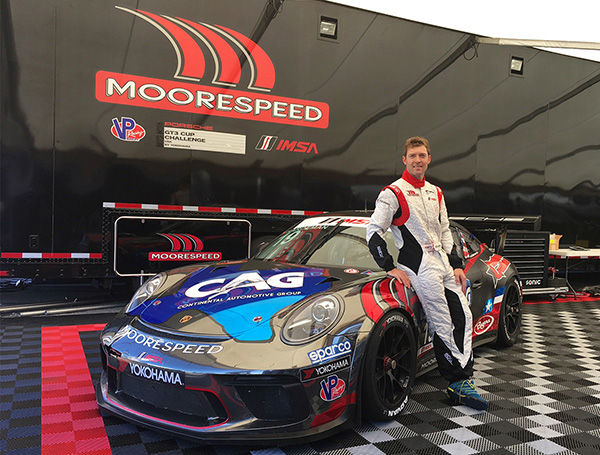 AUSTIN, Texas (November 30, 2017) – Confirming a key component of the team’s continuation of a two-car IMSA Porsche GT3 Cup Challenge USA by Yokohama program in 2018, Moorespeed announced today that Will Hardeman will be back with the team for a fourth-consecutive season next year for a Platinum Cup Championship campaign in the No. 19 CAG/Moorespeed Porsche GT3 Cup.

The second-place team championship finish came from a solid run of 12 top-three results in the 16-race 2017 IMSA Porsche GT3 Cup season, highlighted by at least one podium showing in each of the season’s eight doubleheader race weekends.

“Will had a fantastic two days in perfect weather at our ‘other home track,’ MSR Houston,” Moore said. “Monday was low key, no pressure in case we needed to shake a little rust off, but it was smooth with zero issues. So we had a solid performance and I’m really proud of how well our team worked together, even after almost a two month break.” 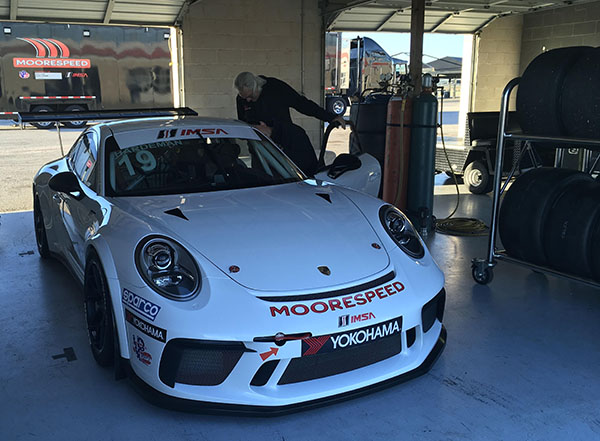 Hardeman had no problem literally getting back up to speed in what was his and Moorespeed’s first time back at the track since this year’s season finale at Road Atlanta in early October.

“The MSR Houston test for us was low pressure and productive, which made for a really enjoyable time with the team,” Hardeman said. “I showed up with low expectations after two months of zero driving and easily exceeded them at MSR in both driving and team communication, which always feels good. Although I’m enjoying the break and time with my wife Anna and our daughter Lily, we definitely have our eye on the 2018 Porsche GT3 Cup season. We have everything it takes to win races, and we are so close. Next year we just need to be more rock solid on the execution of putting the entire race weekend together and race wins will happen.”

“We have two winners we are talking with currently,” Moore said. “It’s ‘silly season,’ and you never know who you are going to have until the last minute it seems. It’s a little challenging as we want to be working with all of our drivers now to make sure they have the very best preparation for the championship. We have great weather down here in Texas most of the winter, it was 80 degrees and sunny at our test this week, and that’s where we can get a leg up on the competition if we get our team nailed down early. Last year was great with two very strong drivers, this season could potentially be even stronger if everything falls into place.”

Moore runs the Moorespeed racing team with General Manager Price Cobb, the 1990 24 Hours of Le Mans-winning co-driver who was a key strategic and coaching resource in 2017’s successful season. They both will welcome back another key part of the Moorespeed coaching and strategic team in 2018.

“I’m pleased to say that my good friend Earl Bamber will be back helping me and Price coach this season again,” Moore said. “So, I can’t wait for 2018.”