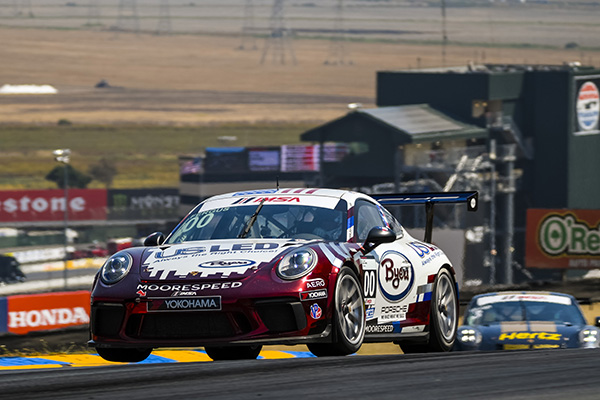 The pair of solid race results came after the Moorespeed teammates had a narrow miss on the first lap of Sunday’s 50-minute race. Running nose-to-tail in second and third, Hardeman under estimated his closing speed going into Turn 9 and unintentionally slid into the back of Fergus’ Porsche under braking.

Fergus continued on in second as Hardeman came to a stop just inches from the concrete retaining wall. Rejoining the race in last place, Hardeman began a charge to the front in the No. 19 that was a highlight of the race and one of the best drives of the third-year Moorespeed driver’s career.

“I told the guys to race hard,” said Moorespeed President David Moore. “We don’t have team orders here, just don’t hit each other and, well, that didn’t work out today! At least we got lucky because when Will tagged Corey he was straight, and it didn’t hurt Corey’s race. Will spun off, went all the way back to dead last, but he set the quickest lap for the whole race just after the incident. We probably would have had a double podium if the last caution had not taken as long as it did to be cleaned up.”

As Hardeman raced to catch up, Fergus skillfully defended second place while doing his best to catch eventual race-winner Jake Eidson and gain more valuable championship points. Along with a third-place finish in Saturday’s race, Fergus’ pair of podiums at Sonoma did solidify his second-place position in the championship even though Eidson wrapped up the 2017 Platinum Cup Championship with victories in both weekend races.

“It’s unfortunate at this point that we’re fighting for second, but we’ve got to look at the positives here,” Fergus said. “We had a double podium weekend, which is pretty strong, we got some solid points and I actually bettered my position in second in the championship. So that’s a good strong weekend for us. This isn’t going to slow us down by any means.”

Hardeman started Sunday’s race fourth on the grid but immediately picked up one position after a great start.

“I did exactly what I visualized before the race and ended up in third place after the second turn,” Hardeman said. “It was all going according to plan, I tucked in behind Corey but misjudged the brake zone into Turn 9 and bumped into the back of him. It was all my fault, but it basically spun me out into the dirt and put me back in last place at that point. I basically drove like I had nothing to lose. It was fun, it felt heroic and I’ve never had so many people so excited about a drive that I’ve done that wasn’t even a podium!”

Sunday’s runner-up finish by Fergus was the 11th top-three result of 2017 for the Moorespeed team, which has put at least one driver on the podium at every IMSA Porsche GT3 Cup race weekend this season.

Hardeman has always been fast on the Georgia circuit and posted his career-best second-place finish – which he has since twice matched at Barber Motorsports Park and Watkins Glen in 2017 – at Road Atlanta last year.

“We’re going to give it our all and go for two wins at Road Atlanta,” Fergus said. “That’s definitely the goal, it’s one of my favorite tracks, and I absolutely love that place. I’m just going to go out with a bang and win two of them.”