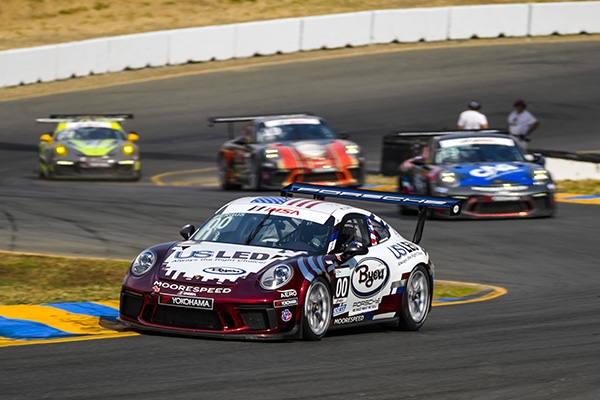 SONOMA, California (September 17, 2017) – A third-place finish Saturday at Sonoma Raceway by Corey Fergus in his No. 00 US LED/Byers/Moorespeed Porsche GT3 Cup was the 10th podium result of 2017 for Moorespeed and keeps intact the team’s record of earning at least one top-three race result at every IMSA Porsche GT3 Cup Challenge USA by Yokohama race weekend this season.

The third-place showing was also the fifth-straight IMSA Porsche GT3 Cup weekend that Fergus has posted at least one podium finish with Moorespeed. The run includes a victory and second-place finish at Circuit of The Americas in May, and a pair of wins at Road America and third-place showings at Watkins Glen and VIRginia International Raceway this summer.

Fergus was poised to stand on an even higher step of the podium in yesterday’s race after qualifying second earlier on Saturday. He formed up alongside the polesitter as the field came down for the start only to have a timing miscue.

“It’s unfortunate that I missed the start a little bit,” Fergus said. “I was just caught off guard and couldn’t really get that back. We are going to have a good debrief and come back stronger on Sunday. The final one-third of the track is where we have been strong all weekend, but the first section is where I am looking to improve on the most.”

Fergus joined his teammate Will Hardeman in putting both Moorespeed entries in the top-five on Saturday.

Starting sixth on the grid in his No. 19 CAG/Moorespeed Porsche GT3 Cup, Hardeman shook off a scrape on the right front of his car from another competitor in an opening lap skirmish to move to fifth position. He stayed in touch with the rest of the leaders in the race’s early stages but soon fell back as the front of the field began to spread out over the 2.2-mile road course.

“Just from critiquing my lap times and the way I was driving versus the leaders, David Moore and I are going to work on cleaning up our game a little bit for Sunday,” Hardeman said. “Just do a little polishing to come back and have leader’s pace for the entire race. I fell back a little bit on Saturday, there was a gap in front of me, and I just never closed it. Sunday I will be in a better position to not let that happen.” 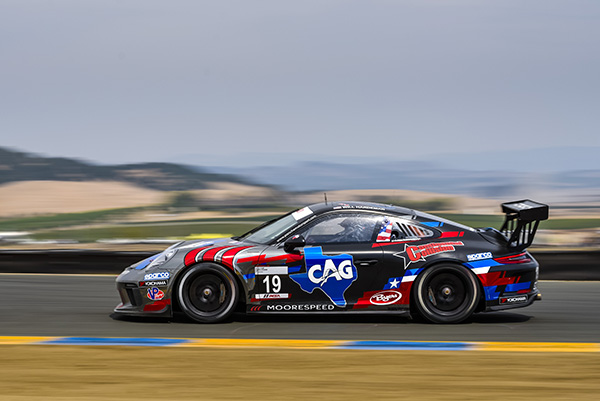 Today’s second and final race of the Sonoma weekend is scheduled to start at 12:25 p.m. PDT. The race will be streamed live on IMSA.tv beginning at 3:15 p.m. EDT and can also be followed through live timing and scoring at IMSA.com.