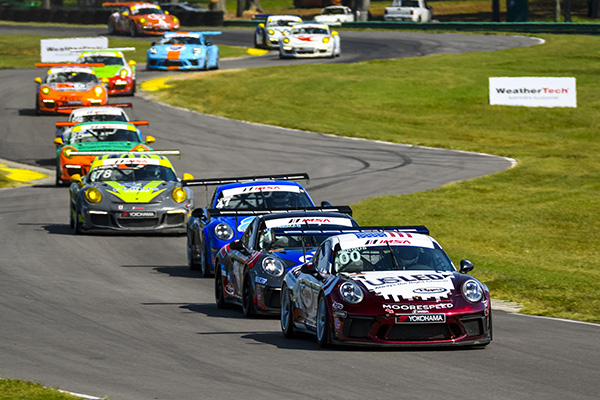 SONOMA, California (September 13, 2017) – Moorespeed and team drivers Corey Fergus and Will Hardeman will be looking for two more race wins and a major move in the 2017 Platinum Cup Championship standings this weekend in the IMSA Porsche GT3 Cup Challenge USA by Yokohama doubleheader at Sonoma Raceway, September 15 – 17.

Fergus has made the most out of his first season with Moorespeed, scoring three race wins in his No. 00 US LED/Byers/Moorespeed Porsche GT3 Cup and contending for the top-tier Platinum Cup Drivers Championship. His victories were in May at Circuit of The Americas (COTA) and a dominating weekend sweep at Road America in August, where Fergus led every lap from the pole to win both weekend races.

Heading into Sonoma, Fergus is second in the Platinum Cup standings with 183 points. He trails the class leader by 40 points, but Fergus and the Moorespeed team have what it takes to close that gap in the year’s final four races.

“We still have a chance,” Fergus said. “We need a lot of things to go our way to get the championship this year. The only thing I really have any control over is winning, so that’s my focus for the final four races. Race wins are important for me right now, not only in this year’s championship hunt, but for my future career as well. One thing’s for sure, I’m not going to let up until the finish.”

Moorespeed is also in contention for the Platinum Cup Team Championship with 199 points coming into Sonoma, just 24 points out of first place.

The team has moved into title contention based on a combined total of nine Platinum Cup podium finishes by Fergus and Hardeman this year. The solid run has seen Moorespeed earn at least one top-three finish in each of the six IMSA Porsche GT3 Cup doubleheader weekends run to date this season.

In addition to the trio of victories and four more podium appearances by Fergus, Hardeman finished second in the No. 19 CAG/Moorespeed Porsche GT3 Cup in races this season at Barber Motorsports Park and Watkins Glen International.

Now in his third year with Moorespeed, Hardeman is on the brink of his first IMSA Porsche GT3 Cup race win coming to Sonoma.

“I plan to just keep pushing the limits of the car and the track in order to exploit every opportunity for pace,” Hardeman said. “You don’t get away with any slacking off in this series if you want to win.”

“I’m for sure proud of our team and how we have all worked together this season to put us on the podium and have a chance to win with either driver at every race,” Moore said. “All in all it’s been a really enjoyable season where we all work together and complement each other very well. We made a conscious decision to share everything from day one between both drivers and crew and I feel it has paid off in spades.”

Fergus will be making his second career appearance at Sonoma, but that first race last year was at the wheel of a Porsche GT3 Cup car similar to the Generation 2 version he will be driving this weekend.

“Sonoma is a really fun track,” Fergus said. “The blind turns and crazy elevation changes make it more of a roller coaster ride than your average track drive.”

The season-ending IMSA Porsche GT3 Cup doubleheader will be at Road Atlanta in early October.

“It’s been a really fun time this year where everyone has put their best foot forward to give us the chance to win,” Moore said. “With only four races left, we have a decent shot for both the team and drivers championships and look forward to the challenge against some pretty strong competition. To achieve those two goals, which we set forth back in December when we put the team together, it would be pretty incredible.”

After a pair of practice sessions on Friday, IMSA Porsche GT3 Cup qualifying takes place at 8:40 a.m. PDT on Saturday.

The first 45-minute sprint race of the weekend is scheduled to go green later on Saturday at 1 p.m. PDT, and Sunday’s second and final race is scheduled to start at 12:25 p.m. PDT.

Sunday’s race will be streamed live on IMSA.tv beginning at 3:15 p.m. EDT. That race and Saturday’s opening round can be followed, along with all practice sessions and qualifying, through live timing and scoring available at IMSA.com.

– Hardeman had never been to Sonoma before a recent test session two weeks ago. He and Moore flew straight to San Francisco right after the most recent IMSA Porsche GT3 Cup race weekend at VIRginia International Raceway (VIR) for a one-day test on Monday, August 28. The test car was a rented Porsche from Flying Lizard Motorsports, which is run by former standout sports car driver Darren Law, who was also one of Hardeman’s first driving coaches.

– Hardeman quickly learned the nuances of Sonoma Raceway’s trademark features. “Sonoma has a high degree of elevation change during the lap which also leads to some blind corners and tricky driving as the car lightens up while cresting hills under cornering and braking,” Hardeman said. “It makes for exciting driving for sure.”

– The total team sharing of all race weekend information and data between both Moorespeed teams has delivered more than just solid results on the track. “It’s helped not only with results but also in developing both Corey and Will to push and help each other to be top level endurance racers when the time comes, which will probably be sooner than later for both,” Moore said.