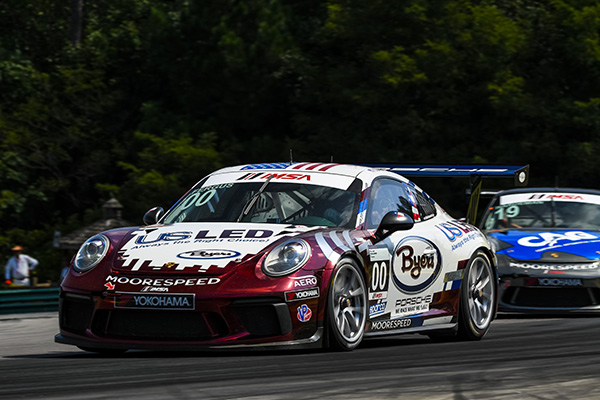 The podium showing was the ninth of the 2017 season for the Moorespeed teammates and continues a streak that has seen the team earn at least one top-three finish in each of the six IMSA Porsche GT3 Cup doubleheader weekends run to date this season.

“It was definitely good to get some points today,” Fergus said. “This race seemed to be a lot about attrition, just staying out of trouble and keeping your wheels on the track. I think we had the pace today, both Will and I, but we really caught traffic horribly wrong throughout the entire race. It was a little frustrating to know we were turning the same sort of lap times as the leaders but we were just too many seconds behind and couldn’t make it up.”

Fergus and Hardeman raced hard but avoided the mistakes that took more than one of the leaders out of contention. Fergus improved three positions for the podium placement after starting sixth while Hardeman moved up to fourth at the finish after starting eighth.

“I felt like we were driving at a very high level today but so was everyone else,” said Hardeman, who quickly moved up one position to seventh on the first race lap. “The top five or six guys were all driving at a level that I’ve never seen as an average speed for the field. We were all doing a nice job, but some guys were once again having to push the equipment a little too far over the edge and it just didn’t hold up near the end of the race. The attrition was a benefit for me.”

The Moorespeed team worked hard overnight Saturday to give Fergus and Hardeman even better race cars for Sunday’s second and final race of the weekend. Hardeman was fifth Saturday and Fergus recovered from a hit-and-spin from another competitor to finish sixth yesterday.

“Third and fourth is not really where we want to be but it’s a hell of a lot better than where we were yesterday,” said Moorespeed President David Moore. “All in all I am proud of Corey today, he got on the podium. We’ve been on the podium every event this year and I want to continue that. Will was really strong today too. We made a few minor adjustments to the car, and I think we had really good pace the whole way.

Fergus maintained his second-place points position in the IMSA Porsche GT3 Platinum Cup class championship standings through the VIR weekend with four races remaining on the 2017 schedule. Next up is a doubleheader at Sonoma Raceway, September 15 – 17. The season-ending doubleheader will be at Road Atlanta in early October.

“I’m definitely happy to get a podium and keep our second place standing in the championship,” Fergus said. “We are moving into Sonoma with confidence. There’s four races to go, anything can happen, so we’re definitely not out of it yet. We can still win so we’re not going to give up. We’re going for it.”

– Moore and Hardeman left VIR right after the race to fly directly to San Francisco for a day of testing at Sonoma Raceway tomorrow. “Will and I are heading right to Sonoma,” Moore said. “We will be testing tomorrow, Will’s never been there, so we’re going to work with Darren Law, a good friends of ours who helped Will when he first started racing, who runs the Flying Lizard team. We are renting a Porsche from them and will work on getting Will familiar with a really cool race track. Corey will prepare on the simulator back home. He has been to Sonoma before but just didn’t have the schedule to come out with Will and I this time.”

– Fergus will be making his second appearance at Sonoma. “I went to Sonoma last year for the first time in World Challenge GT3 Cup,” Fergus said. “It’s a very fun, challenging, technical track. I was definitely not as quick as I wanted to be last year, that’s for sure, but I’ve got a lot more experience and confidence in the car now. This year I think it’s going to be a different track for me. I feel good going into it and will get some simulator training before we go out there. I know the team will be ready and so will I.”