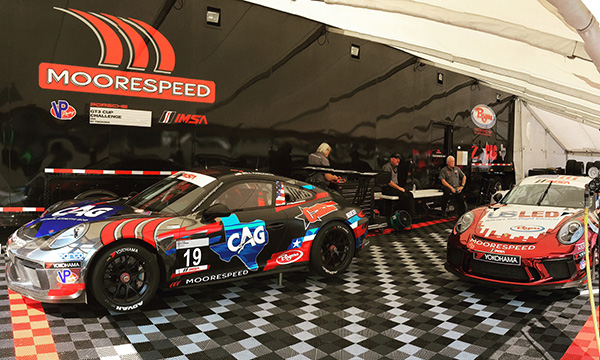 Hardeman started the 45-minute race eighth overall and in the top-tier Platinum Cup class and began his move up the field soon after the green flag waved. He raced to seventh on lap one and later reached the top five as the competition in front of him got a little harried.

“I just focused and drove the car to about the best of my ability without getting too far off the tightrope that is VIR,” Hardeman said. “It was kind of a game of attrition. I made an early pass and pretty much just drove hard and gained positions after that due to incidents in front of me.”

One of the incidents, unfortunately, knocked Fergus from contention for a podium position right when he was challenging the top-three in fourth place.

“It was unfortunate what happened to Corey,” said Moorespeed President David Moore. “I was actually over at that corner and saw what happened. Anthony Imperato stepped out, got in the dirt, and tried to get back on to stay in the game. His tires had a lot of junk on them, and I don’t think he did anything on purpose, but Corey was unfortunately right there when he came back on.”

The hit spun Fergus off the track but he quickly gathered it up and continued the chase.

“I just put my head down and tried to think about the big picture,” Fergus said. “As much it’s frustrating to be knocked out, you just have to move on and think about the championship. There is no sense dwelling on it, I just needed to drive fast laps and make up as much ground as I could. Sixth place is where we ended up, which is pretty good considering the circumstances.”

Fergus is currently second in the IMSA Porsche GT3 Platinum Cup class championship standings with five races – including tomorrow’s second race of the VIR weekend – remaining on the 2017 schedule.

“I’m really proud of Corey for getting back on track, putting his head down and rolling some of the fastest laps in the race,” Moore said. “He was way back, got back in it, and actually had a shot at the top-five as well. Kudos to Corey for really thinking about the big picture and trying to get as many points as he could for the championship.”

Sunday’s second and final IMSA Porsche GT3 Cup race of the weekend is scheduled to start at 11:05 a.m. EDT. The race will be streamed live on IMSA.tv and can be followed, along with all practice sessions and qualifying through live timing and scoring available at IMSA.com.

– Moore liked the late charges he saw from both of his drivers. “Will really got it together racing with the leaders in the last two laps and never quit,” Moore said. “Neither one of them are quitters, they are both winners. They didn’t win today but we’ll go get them tomorrow.”

– Hardeman has plenty of confidence in his Moorespeed-prepared Porsche GT3 Cup No. 19 CAG entry. “We might make one tweak for Sunday but the car felt good,” Hardeman said. “Moorespeed and David always seem to be able to give me the winning formula whenever I go out for competition, which is why I love racing with them.”