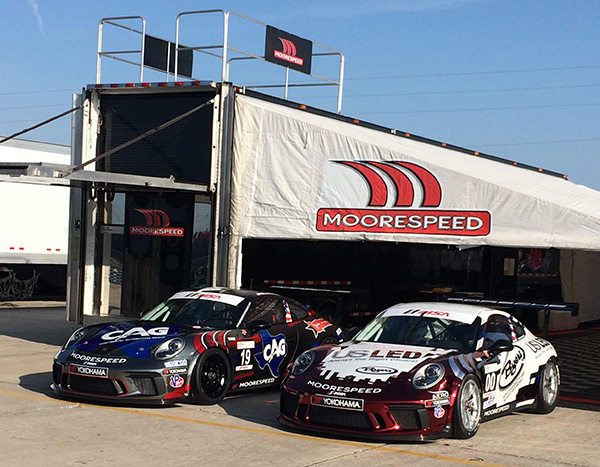 Moorespeed, Hardeman and Fergus were among the first to test one of the new Porsches at MSR Houston in January, tested again last month at Barber Motorsports Park and also ran the two-day IMSA session at Sebring this past Thursday and Friday. Hardeman and Fergus cooperated and openly shared information at all of the tests, working like teammates that have been together for a few years, not just a couple of months.

Moorespeed President David Moore wouldn’t have it any other way.

“We had the opportunity to take on a few other drivers the past two seasons but none really fit, either of their own accord or not meeting our program criteria,” Moore said. “It’s important that everyone “fits,” and with Corey, it was a no brainer. I’m very pleased at how the entire team has gelled and how well everyone is working together on and off the track. It’s a great vibe throughout the entire team.”

Last week’s two-day IMSA test was the last chance teams had to lap around the 3.74-mile Sebring road course before this week’s schedule gets underway tomorrow with unofficial practice.

“Last week at the official IMSA test, Will and Corey worked hard and they had fun doing it,” Moore said. “Everyone did. Both were fast and the team performed fantastically under our veteran Crew Chief Robin Hayes and our General Manager Price Cobb, who knows a little bit about driving himself. But what really struck me the most, was that Will and Corey tirelessly helped each other long after Price and I went through debriefings with each of them. They were studying each other’s data and video like two college roommates studying for a final exam together. It was cool to be a fly on the wall and sit back and watch and listen. They are a lot alike in some respects off the track, but on the track they drive quite a bit differently, so they can each learn from each other from their different styles.”

Racing together for the third-straight season in 2017, Hardeman, Moore and the Moorespeed race shop are all based in Austin, Texas.

“We are super optimistic about this year,” Hardeman said. “It’s so positive to have a teammate like Corey who pushes the pace and has a totally different and complementary driving style to mine. When you combine both our data laps, the theoretical combination is P1. There’s no other team in GT3 cup this year that has that going for them.”

“I’m feeling good going into the season,” Fergus said. “I have a lot of confidence in the whole Moorespeed group and a lot more in myself compared to last year. Working with Will at the test proved that we’ll definitely be able to help each other this year. We worked together very well as a team and learned valuable information about car setup. Getting to test less than a week before our first official session is pretty amazing. I’m very glad we attended because we gained important track and seat time.”

– Wednesday’s unofficial test session and a pair of late-afternoon track walks are next on Moorespeed’s agenda. “Will and Corey both still have a lot of homework to do and the track walks will be critical to continue learning it, as will the test Wednesday before official practice begins,” Moore said. “The guys that are really fast at Sebring know where every bump, dip, and high and low grip area is and how to navigate through them effortlessly, in traffic or not.”

– Hardeman is well experienced with Sebring’s notorious bumps. “Sebring requires getting over the discomfort of the bumps before you can get on pace,” Hardeman said. “Once on pace, there is still a bit of uncertainty on how the car will react each time through certain corners. If you can put together good laps, then it’s all very rewarding.”

– Fergus finds Sebring enjoyable despite the punishment the notorious track gives to both cars and drivers. “Sebring is a driver’s track,” Fergus said. “It’s extremely technical and has several different types of turns to it. It’s got a little bit of everything: a hairpin, high-speed sweepers, off-camber turns, long straights and heavy braking. It’s also a longer circuit, which means more room for error to separate the good from the great. It’s just a fun track, regardless of the fact that you need a mouthguard to race there!”