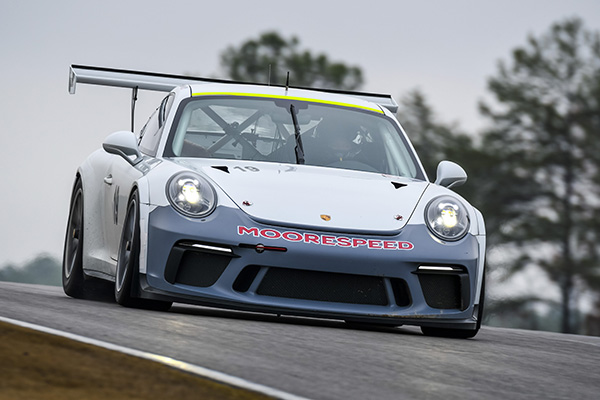 Moorespeed, Will Hardeman and Corey Fergus Shake Off Rainy Start for Productive Two Days of Testing in Alabama

BIRMINGHAM, Alabama (February 10, 2017) – Moorespeed, team drivers Will Hardeman and Corey Fergus, and several of their IMSA GT3 Cup Challenge USA by Yokohama competitors, didn’t let damp weather stand in the way of a productive two-day test at Barber Motorsports Park this past Tuesday and Wednesday.

The Moorespeed Platinum Cup contenders shared the track with more than 10 other Porsche GT3 Cup entries from Wright Motorsports, Alex Job Racing, TOPP Racing and Pfaff Motorsports in what was the largest gathering of new Generation 2 Porsche GT3 Cup cars on track together to date.

“The first day was not great due to lightning and heavy rain keeping us off the track,” said Moorespeed President David Moore. “On day two, however, the team was able to run our scheduled programs derived from where we left off at our last test at MSR Houston, and from what I learned in the Yokohama and Porsche Motorsport test at Road Atlanta I attended last week.”

Hardeman and Moorespeed are both based in Austin, Texas, and will race together for the third-straight season in 2017.

“We made progress at the Barber test so it was a success,” Hardeman said. “We didn’t have much time running in the pure dry, but the rain and variable conditions sure let us experience some things that usually take months to see during the normal season. Even after the track dried out on Wednesday afternoon from the rainstorms, there were still some damp spots that kept us from taking the cars to the ragged edge, but we did the most with what we had.” 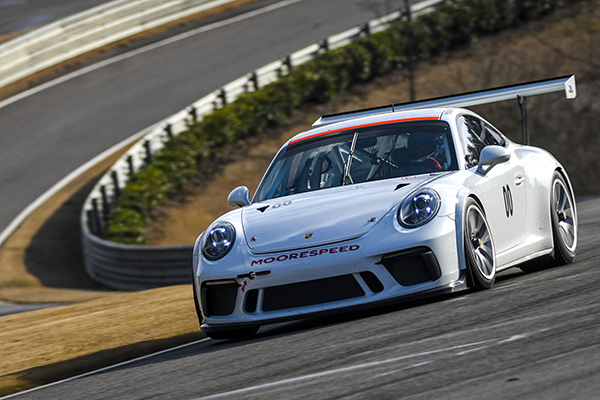 “Unfortunately, we didn’t get as much testing in as we wanted because of the weather, but we did still have a successful test and learned a lot about the new car that we can take with us to the races back here at Barber in April,” Fergus said. “It felt like an official test with around a dozen cars in attendance. It’s always great to have your competition testing with you because you get a better idea of where you stack up.”

“Price Cobb did a great job holding down the fort,” Moore said. “He said it was easy as our guys work together so well, it’s like clockwork. Will and Corey both indicated to me that they wish they had gotten more out of themselves and the car, but the track was green and damp even on Wednesday morning. With only a few hours in the afternoon to really push I think they did well and managed their equipment and the situation wisely. Everyone was upbeat and the changes made were positive.” 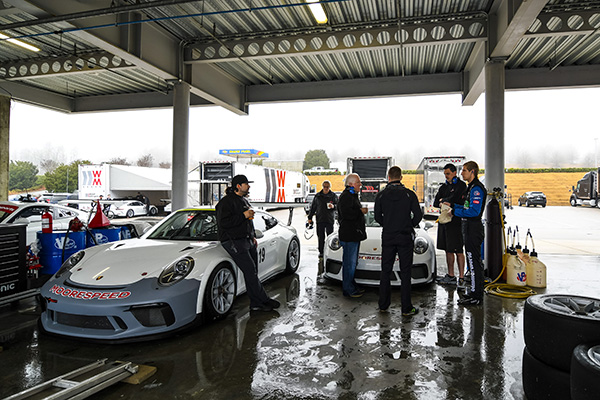 “We really want to thank Porsche, Yokohama and everyone else for sending out the troops in total support,” Moore said. “I talked with Owen Hayes, Director of Operations of Porsche Motorsport North America, and he was very pleased with the test and the performance of the new Generation 2 car. He said there were no issues and that everyone was pleased with the direction we are headed.”

– Moore was hoping for conditions that would have let his team and drivers perform to their full ability but appreciated the discretion in the damp conditions. “Maybe we were a little conservative but that’s better than wadding up a car too,” Moore said. “Price said neither driver lit their hair on fire on Wednesday but they didn’t step out of line either. He would have liked to have seen them push it a bit more, because both of them have the talent, but appreciated the conservative approach at a new track in the wet.”