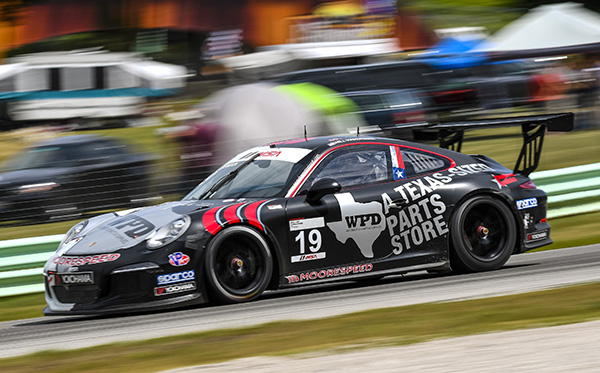 DANVILLE, Virginia (August 25, 2016) – Second-year driver Will Hardeman and the Moorespeed racing team return to the site of their best 2015 finish at Virginia International Raceway (VIR), August 26 – 28, where the IMSA GT3 Cup Challenge USA by Yokohama will compete in a doubleheader during the Michelin GT Challenge at VIR race weekend.

Last year at VIR, Moorespeed and Hardeman – then a rookie – broke through for a fourth-place finish that was their best result of 2015.

Now in their second season in IMSA GT3 Cup Challenge USA by Yokohama in the No. 19 WPD/Moorespeed Porsche GT3 Cup, Hardeman and Moorespeed matched last year’s top finish with another fourth-place showing earlier this season at Laguna Seca.

“I’m super optimistic for this weekend,” Hardeman said. “This season I’ve changed up everything about my driving style, from the time that I enter a corner to the time I exit a corner, and we’re driving with a more aggressive setup than I’ve ever raced with. The car is looser with less wing, so we’re running an overall faster setup.”

Hardeman and Moorespeed return to VIR determined to hit the IMSA podium for the first time on a track that is a favorite for all on the team.

“I look at my videos from last year at VIR and it’s like the difference between me then and me today is that we are two different drivers,” Hardeman said. “I am adding a little race craft and managing traffic a lot better, and I know the track at VIR this year, so I’m coming in with a lot of confidence.”

After one of the best race starts of his career, Hardeman was on pace for a podium in the most recent IMSA Porsche GT3 Cup Challenge USA race at Road America only to be spun out while challenging for third in the opening laps. He quickly recovered from the bump-and-run spin to charge back to a ninth place finish.

“At Road America, Will was battling to go up front when he got dive bombed into the rear bumper, spinning him out of third place and back to 21st, yet he finished ninth,” said Moorespeed President David Moore. “He might not have won the official ‘Hard Charger’ award but he should have in my opinion. He never gave up and fought hard to come back through the field.”

Hardeman and Moorespeed have been in contention for a top-three finish in most of the races they have run this year.

“I think Will’s chances of a podium have been high at most all of the races we have attended this year, as long as he keeps focused and does not let others dictate his pace,” Moore said. “He was very fast in the second race last year at VIR, but there is still room for improvement in a few sectors. He has been working diligently on the simulator while reviewing data and video from not only his in-car camera but the GTLM race of last year too.”

Hardeman is the latest driver to go through Moorespeed’s proven driver development program.

“We don’t teach to race cautiously,” Moore said. “We teach to race hard and smart, to never quit no matter what, and to always try your best with the goal of winning. Yes, we teach to be assertive but to do it clean with respect to the other drivers. Will is very smart and he has become a real racer this year and has the hunger not to just be on the podium, he wants to win.”

There couldn’t be a better track to follow the encouraging Road America weekend, but VIR is a little bit different this year. The 3.27-mile road course has undergone a major repaving that will almost certainly deliver faster lap times.

“You never know what to expect with repaving, but I think it’s safe to assume there’s more grip, which would allow you to take some of the turns faster and braking zones deeper,” Hardeman said. “Probably the biggest difference is on the uphill esses, some of the fastest esses in all of motorsports. If there’s more grip through there it will really showcase the drivers who can make the most of it or chicken out.”

Teams will get their first crack at the new surface in today’s unofficial test day at VIR.

“We just don’t know how it will change the line or how it may cause different grip levels,” Moore said. “We assume it will be better but you never know. We will find out in today’s test day. Regardless, Will is a very quick study so I think he will do great if the track is better, the same or even worse.”

In addition to the Saturday and Sunday races, the GT3 Cup Challenge schedule at Road America includes a pair of practice sessions on Friday and qualifying at 10:05 a.m. EDT on Saturday.

All on-track sessions, including both races, will be broadcast on www.IMSA.tv, with live timing available at www.IMSA.com.