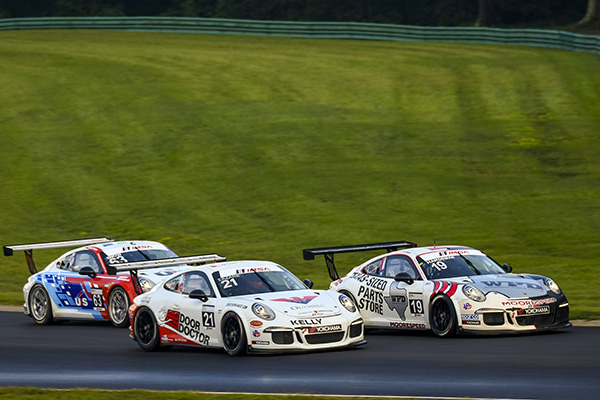 Hardeman Shows Continued Progress as He Jumps to Race Lead at Start in No. 19 WPD/Moorespeed Porsche GT3 Cup Before Ninth-Place Finish

DANVILLE, Virginia (August 27, 2016) – Will Hardeman charged to the front of the field from fourth on the grid at the start of Saturday’s IMSA GT3 Cup Challenge USA by Yokohama at Virginia International Raceway (VIR) and led his first race of the season in the No. 19 WPD/Moorespeed Porsche GT3 Cup before an eventual ninth-place Platinum Cup finish.

The great race start in damp conditions was another major step of progress for Hardeman who is in just his second season of professional racing competition in Moorespeed’s driver development program.

“As lucky as I feel like I got on the start – I capitalized on some great opportunities that were made available and made some good decisions on the first lap – I was just as equally unlucky on the second lap leading,” Hardeman said.

Hardeman led the opening race lap but then got caught out by the tricky track conditions on the damp and recently repaved 2.37-mile VIR race circuit, sliding off course in Turn 1.

“When you’re leading a race, especially in variable conditions, you are the guinea pig out there,” Hardeman said. “I made a mistake into a slippery brake zone and fell back to last.”

Keeping his focus, Hardeman continued and raced back through the field, improving over 10 positions by the finish despite a lengthy red flag delay that ate up 21 of the race’s 50-minute length.

“We were kind of hoping for wet conditions, we tested in the rain last week, and Will is usually really good in the wet,” said Moorespeed President David Moore. “I called the start from where I was at turn three and actually saw him make the pass for the lead. It started with a drag race down the front straightaway, a good move through turn one, another good move through two and he stuck it on the inside of three and had a three-car length lead going into four.

“The only thing is when you’re out front you’re the first guy to find the grip. Will went a little deep and wide into Turn 1 on the next lap and paid the price.” 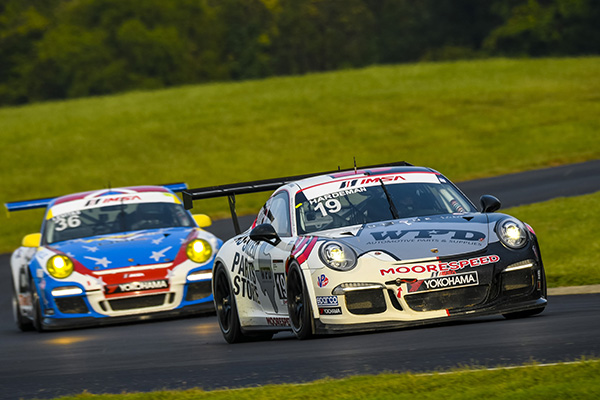 As he did after being spun out by another competitor while challenging for third place one race ago at Road America, Hardeman quickly tried to get back into the chase.

“It took a little bit of time to get back on but he didn’t give up,” Moore said. “To come back and finish ninth in class and get a top-10 finish overall in a race that had minimal time under green was a phenomenal effort to come back.

Hardeman took it all as a learning experience and will have another chance with Moorespeed to earn a top finish in Sunday’s second and final race of the weekend.

“I know what I’m capable of and when it all does come together it’s going to be really fun and special,” Hardeman said.

Moore knows it’s only a matter of time before his team and Hardeman earn the success they have worked so hard to achieve.

“It’s funny, Will came to me after the race and said I want to strangle myself,” Moore said. “And I said ‘not before me,’ but all-in-all I’m still proud of him. No one is perfect, and he knows to win he’s going to have to get close to perfection. One little mistake can cost, and this one cost dearly.

“He learned a hard lesson but it will pay off sooner rather than later. We look forward to tomorrow’s race.”