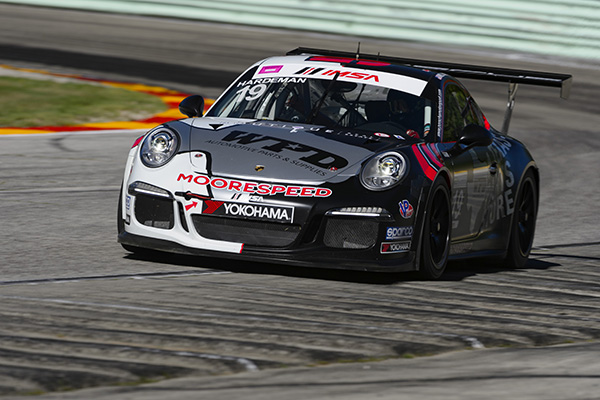 Hardeman Fights to Finish After Being Spun Out From Fourth Place in No. 19 WPD/Moorespeed Porsche GT3 Cup

ELKHART LAKE, Wisconsin (August 8, 2016) – Will Hardeman and Moorespeed rebounded from an early race ‘”bump and run” spin in the No. 19 WPD/Moorespeed Porsche GT3 Cup to charge back to a ninth-place finish Sunday in the second and final IMSA GT3 Cup Challenge USA by Yokohama race of the weekend at Road America.

After one of the best race starts of his career from sixth on the grid, Hardeman picked up two positions by the time he came to Turn 5 on the first lap of the race.

He quickly zeroed in on the third-place car only to be hit from behind and sent into a spin by eventual third-place finisher, Lucas Catania, on the second lap of the race.

The incident likely robbed Moorespeed and Hardeman of a certain podium finish as both the team and driver – and the No. 19 WPD/Moorespeed Porsche GT3 Cup race car – were all on pace and performing at Road America.

“When I spun in turn five I got bumped at the apex by Catania,” Hardeman said. “It was a major setback because, being in the first laps, the whole field is right there and running together. We didn’t have a gap yet, so I couldn’t recover and maintain my position.”

Rejoining the race after the majority of the field swept past, Hardeman kept his cool behind the wheel and began to charge through the field.

“That’s racing, there was no damage, nothing catastrophic, so I made the most of it and I charged up from 19th in the back to ninth at the finish,” Hardeman said.

The early spin didn’t take away from the dual achievements of an otherwise good day for Hardeman and Moorespeed.

“Will showed up a full 110% today,” said Moorespeed President David Moore. “I am very proud of him and very pleased with how the team came together yesterday. We were going back over the race, debriefing and looking at things. We didn’t leave any stones unturned and found we had an issue with some of the shocks. We went back to our basic setup, our cookbook setup we had prior to qualifying, and it worked.”
Hardeman’s great race start and early passes for position were among some of the best racing he has done in his two-year racing career.

“When he came out on the track you could tell right from the get go he was on it today,” Moore said. “One of the things I talked to him about too after Saturday was trying to really focus on the start, and he had a great start today, one of the best starts he has ever had.”

Running his first race weekend since May at Laguna Seca, Hardeman admitted he felt a little rusty earlier in the weekend, but it was hardly evident today.

“I have a race start technique that I implemented at Road America for the first time and it’s paying big dividends,” Hardeman said. “I just have so many more race craft tools in the bag these days, so when I was passing all those guys it was so clean, so easy, I knew where to set them up, where to draw them in, it was just textbook stuff after that. I just wish I could have done more from the front of the pack, not the back of the pack.”

Moore knew Hardeman long before they started racing together just over two years ago.

“I know Will at a level to where I get that feeling. When he got hit, I pretty much knew he wasn’t going to give up. In the past, when you fall all the way back to dead last it’s really easy to just get into cruise mode and bring it on home. I just go on the radio and said I want qualifying laps every lap for the rest of the race, and you can catch these guys.”

Next up for Moorespeed is another doubleheader IMSA GT3 Cup Challenge USA by Yokohama weekend at VIRginia International Raceway (VIR), August 26 – 28.