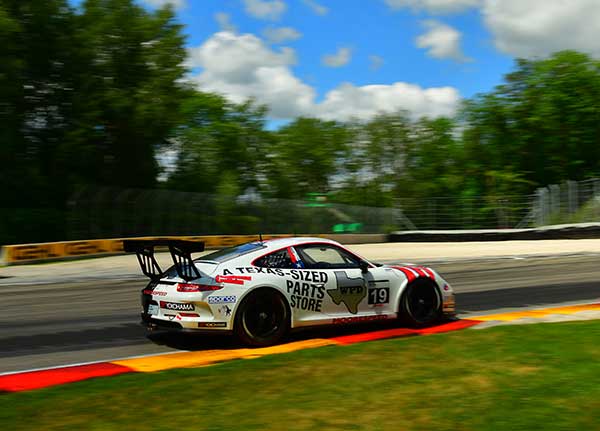 Hardeman Shakes Off Rust in No. 19 WPD/Moorespeed Porsche GT3 Cup in First Race since May; Round 2 Sunday 11:15 a.m. CDT

ELKHART LAKE, Wisconsin (August 7, 2016) – Will Hardeman qualified and finished sixth Saturday at Road America in his first race in more than three months in the in the No. 19 WPD/Moorespeed Porsche GT3 Cup.

Hardeman jumped to the top five in the opening laps of Saturday’s 45-minute sprint and then battled to stay there in the first half of the race.

“It was all fair-and-square stuff and clean racing,” Hardeman said. “I need to keep the car on the track. A lot of time I would fly off the track on the exit into the dirt and it’s for sure ripping up the underneath and messing with the aerodynamics.”

Hardeman ultimately dropped back to sixth and would stay there to the finish.

“He’s just a little rusty,” said Moorespeed President David Moore. “He’s been away for three months and it showed today. You just can’t take that much time off and come back and expect to be in the hunt.”

The aerodynamic damage to the car from the off-course moments combined with a shock absorber issue that Moorespeed detected after the race to make the No. 19 a real handful for Hardeman.

With those issues repaired and addressed, Moorespeed and Hardeman look forward to having a better race tomorrow.

The second and final race of the Road America doubleheader starts at 11:15 a.m. CDT on Sunday.