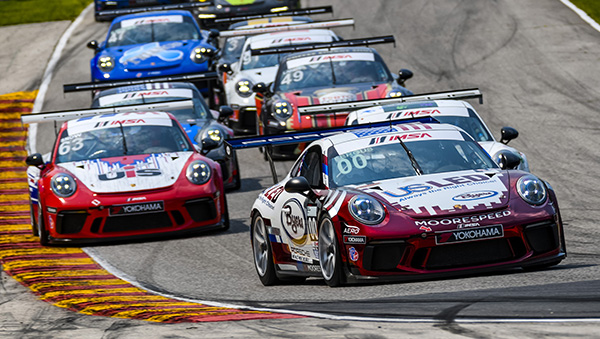 The Moorespeed teammates have combined for eight total Platinum Cup podium finishes in the year’s first 10 races, highlighted most recently by a double-victory sweep by Fergus one race ago at Road America The dominating performance saw Fergus lead every lap from the pole in both the Saturday and Sunday 45-minute sprints at Road America, moving him to second in the championship point standings.

“We had a great weekend at Road America,” Fergus said. “The team is capable, and we proved again that we can win. I know I have to keep winning to have a shot at the championship, so that’s what I’m going to focus on.”

The Fergus sweep followed another milestone double for the Moorespeed duo one race prior to Road America at Watkins Glen. Hardeman scored his second runner-up result of the season in The Glen race and was joined on the podium for the first time by Fergus in third place.

After a fourth-place finish Saturday at Road America, Hardeman was primed to join Fergus on the podium again in Sunday’s race only to be sidelined halfway through the race with a transmission issue.

“Corey swept the Road America rounds, and Will would have been right there with him in race two battling for the podium if not for a gremlin that attacked his air-shifter,” said Moorespeed President David Moore. “We are really proud of both Corey and Will, and the team is doing everything it can to help them achieve their goal of finishing one-two together. Will is out for redemption and Corey is on a mission to catch Jake Eidson for the championship, so VIR should be fun.”

Moorespeed, Fergus and Hardeman had a productive two-day test last month at VIR, which prepared them for both this weekend’s races and the Road America rounds.

“Being able to test two cars at once with varying setups allows us to improve our ‘intel’ at two times the rate of a one-car effort,” Hardeman said. “Corey and I have slightly different driving styles yet we end up with similar lap times, so we are able to draw on each other’s strengths to both end up with better pace.”

The expanded testing program has been a primary part of Moorespeed’s success and preparation this year, providing double the data and information with first-year teammates Fergus and Hardeman on track together.

“Seat time at any track where we are racing is a real benefit,” Moore said. “We’ve tried to test all season with that in mind, but it was especially true in particular for Corey at VIR as he had previously only competed there with the lower horsepower ‘momentum’ type of race cars. We can’t thank the team at Byers Porsche enough for playing a big part in making this testing possible.”

The recent run of race-winning success has moved Fergus to second in the IMSA GT3 Platinum Cup standings behind championship leader Jake Eidson, 191 – 157.

“The VIR test taught us a lot,” Fergus said. “It not only helped our preparation for Road America, but really helps us get back in the groove quicker when we get back to VIR, which is a fun track. The uphill esses are the most notable section of the track in my mind. It’s flat out, at the limit. I would say it’s definitely one of the best tracks in the country.”

Hardeman is racing at VIR with Moorespeed for the third-straight year. In 2015 at VIR, Moorespeed and Hardeman – then a rookie – broke through for a fourth-place finish that was their best race result of the season.

“I enjoy the bold and fast sections at VIR, and I feel that is a strength heading into the race,” Hardeman said. “The track is fast and exhilarating with good elevation change.”

One race prior to The Glen, Fergus scored a second-place finish and his first career IMSA GT3 Cup win in the early May doubleheader at Circuit of The Americas (COTA).

Including a third-place finish by Fergus in the second race of the season-opening event at Sebring International Raceway in March, Moorespeed has put at least one driver on the podium at every race weekend in 2017. That amounts to eight different podium appearances and two each in the last three races at Road America, The Glen and COTA.

Following this weekend’s pair of races at VIR, the IMSA GT3 Cup season concludes with doubleheaders next month at Sonoma Raceway before the season-ending rounds at Road Atlanta in early October.

“There’s no relaxing for the next six races,” Fergus said. “It’s an all-out sprint, and I’m going to give it everything I have.”

The first 45-minute sprint race of the weekend is scheduled to go green later on Saturday at 6 p.m. EDT, and Sunday’s second and final race is scheduled to start at 11:05 a.m. EDT.

– Moorespeed’s successful 2017 testing program is a testament to the close cooperation between Fergus and Hardeman. “We are very pleased that Corey and Will continue to work hard together, like brothers, and it showed right away as they got up to race-pace speed very quickly at the VIR test,” Moore said. “We were satisfied with their performance enough to let them do a full-race simulation and race each other. We learned a lot from that simulation that we took to Road America, and I think the results speak for themselves.”