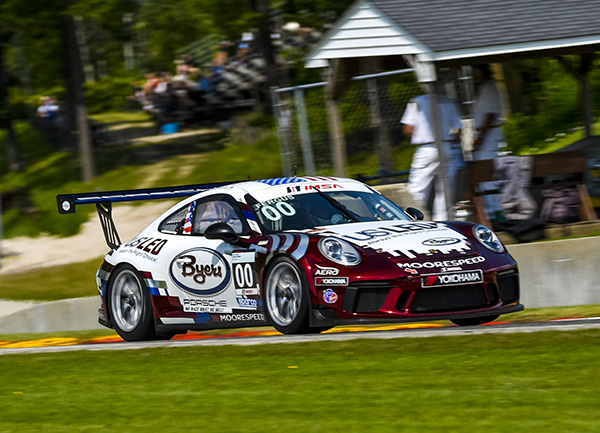 As he did in Saturday’s opening round of the Road America doubleheader, Fergus took the lead from the pole at the race start and was never seriously challenged. He crossed the finish line 1.556 seconds ahead of second-place finisher Jake Eidson, who trailed the No. 00 Byers/Moorespeed Porsche to runner-up honors for the second day in a row.

“At the end of the race I was just controlling it, not making any mistakes, just kind of keeping the distance over second place,” Fergus said. “When the 10-minute warning came out, I laid one lap down just to see what I could do, and I went about as fast as I had gone the whole race. So, I knew I could still go faster if I wanted to, so I just maintained that gap and pulled it off again.”

“Corey really put his head down,” said Moorespeed President David Moore. “He drove a smart race, managed his equipment, managed his tires and he really put down the wood in sectors where he was strong. He came home with some good points with another victory. We need to have a little bit of luck to catch back up in the points quicker than we have, but Corey is now second in the championship and the team is second in the championship, so that’s all good.”

Fergus’ teammate Will Hardeman was poised for a podium showing of his own Sunday after a fourth-place finish in Saturday’s race in the No. 19 CAG/Moorespeed Porsche GT3 Cup.

Unfortunately, the third-year Moorespeed driver endured one of the most trying races of his career. A gearbox problem gave Hardeman a string of issues, starting before the race even took the green flag and straight up until the transmission and engine both gave out at half-race distance.

“Overall there is an element of luck in this sport,” Hardeman said. “Over the last three years and last three seasons we’ve never had a mechanical issue like this, so we’ve been fortunate in the grand scheme of things. Luck wasn’t on our side but I am OK with the way everything went down because I still did everything I could do out there to try to maximize the situation as it unfolded. We were still running fast laps and managing traffic, but eventually the car just gave up the ghost a little past half distance.”

The heavy rain that plagued Road America early this weekend may have factored into the transmission issue. Hardeman finished fourth and Fergus was fifth in Friday’s Watkins Glen “makeup race” that was run in rainy conditions.

“We had a transmission that had a mind of its own,” Moore said. “Water and electrics don’t mix, and we think that maybe some condensation or moisture from Friday’s wet race might have affected some of the electronics for the shifting mechanism. It was downshifting randomly without warning. I can’t believe Will didn’t spin out on some of the downshifts that went straight from sixth down to first gear. The motor really did a wonderful job of holding on until finally it just couldn’t take anymore.”

Next up for Moorespeed and the IMSA GT3 Cup Challenge USA by Yokohama is the doubleheader weekend at VIRginia International Raceway (VIR), August 25 – 27.

– Fergus now has three Platinum Cup IMSA Porsche GT3 victories this season. The first was at Circuit of The Americas (COTA) in early May where a strong group of supporters from Byers Porsche was in attendance. Ironically, the group hasn’t been back to a race until this weekend’s winning one for Fergus, who works at Byers as a Porsche brand ambassador. “There’s a lot of people to thank, this weekend in particular the Byers Porsche guys. Some of them drove all the way up to Road America to be here after their flights from Ohio were cancelled. They drove all night to get here and I am so happy I won two for them.”

– Hardeman and Fergus stood on the podium together one race ago at Watkins Glen and Moore was feeling that again this weekend. “I really thought we were going to go one-two today,” Moore said. “We had one-two pace for sure. Even with the transmission problem, Will did a fantastic job. I was really hoping that we would have both guys up there on the podium again today, but we will have to wait to try again at VIR.”

– Moorespeed, Fergus and Hardeman tested at VIR two weeks ago. “We had P1 and P2 pace at Road America, and I know we have P1 pace at VIR according to our recent test there,” Hardeman said. “I am really encouraged by the work we’ve put in so far to go back to VIR. I know Moorespeed is going to get the car right, and judging from our last three seasons, it’s always perfect. We are just going to apply the same work, preparation and simulator time that we have put into all the other races for VIR too, and we’re looking forward to it.”