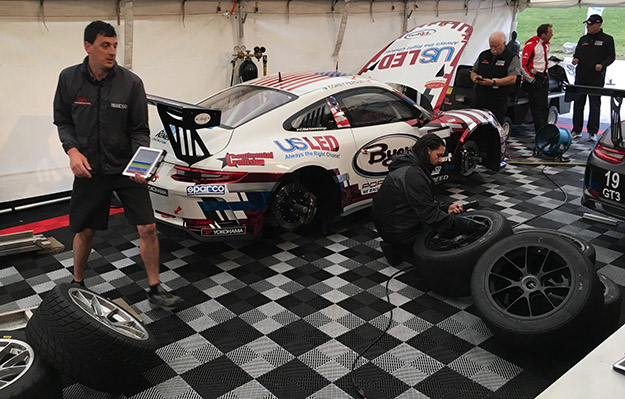 – Will Hardeman Qualifies Fifth in No. 19 CAG/Moorespeed Porsche GT3 Cup

Elkhart Lake, Wisconsin (August 4, 2017) – Corey Fergus won the pole Friday in qualifying for this weekend’s pair of IMSA GT3 Cup Challenge USA by Yokohama races at Road America in the No. 00 US LED/Byers/Moorespeed Porsche GT3 Cup.

The 20-minute qualifying session was the first time IMSA Porsche GT3 Cup competitors took to a dry track this weekend. Rain Thursday and most of the day Friday finally subsided in time for the late-afternoon session to be run on a dry track.

Fergus lapped consistently within the top five for the first 18 minutes of the qualifying run before making his move. He took the pole with just under two minutes to go and then locked it down for good with an improved time of 2:11.307 (110.982 mph) before the checkered flag waved.

“It was really exciting,” Fergus said. “We hadn’t had a dry session all weekend so we all went into this sort of blind a little bit. We just relied on the experience our team has, and we learned a lot in our recent test at VIR (Virginia International Raceway). Everything we learned there we took to the track here, and fortunately it paid off big time. Everything just clicked, this is my favorite track and I am really familiar with it.”

Fergus’ teammate Will Hardeman also challenged for the pole in qualifying and ended up with the fifth fastest time in the tight Platinum Cup field. Hardeman turned a top lap time of 2:11.900 (110.483 mph) in the No. 19 CAG/Moorespeed Porsche GT3 Cup despite a quick dash to the pits and uncooperative traffic.

“The track was a little green after all of the rain, but when the tires came in the grip level was really high and it was back to the confidence and Road America that we all love,” Hardeman said. “Qualifying goes every which way each time and there is an art to it and managing the traffic. I just had a few little foibles with that today but it was pretty much smooth sailing in total. The track is coming back to really what we have been training and practicing for all of this time.”

Moorespeed President David Moore gave part of the credit for Friday’s top qualifying effort to the team’s test two weeks ago at VIR.

“Things went well considering it wasn’t ideal conditions to start with in the rain,” Moore said. “We really didn’t get a chance to run the program we wanted to do, but the setup, Corey’s driving in general and how the team prepared the car from our test at VIR really played into our success today. Corey was focused, he did really good job.”

Fergus is coached by Moorespeed General Manager Price Cobb, the only three-time Porsche Cup winner and an overall winning co-driver in the 1990 24 Hours of Le Mans.

“Clearly we think the world of Corey,” Cobb said. “It’s a team effort, I know he and Will work all of the time on their simulators, and we discuss everything openly and together at all times. Corey really likes leading from the pole and, barring any disasters, it should be a really good race tomorrow and on Sunday.”

The second and final 45-minute sprint of the weekend is scheduled to start Sunday, August 6, at 9:40 a.m. CDT.

– Moorespeed started Friday with a pair of top-five finishes in a wet and rainy Watkins Glen makeup race. After both drivers dropped back a few spots in the tricky conditions at the race start, Hardeman worked his way back to fourth by the finish. Fergus crossed the line just behind his teammate in fifth. “I am glad that we came out in one piece,” Hardeman said. “That’s always my goal in the wet. It’s unpredictable and anything can happen.”

– Moorespeed may have had even more speed available in Friday qualifying than they were able to show. “We did mess up a little bit,” Moore said. “We had a little bit more. We missed the window on the tire pressures, without going into detail, but we had a little more in hand. Will even came in for an adjustment, but by the time he went back out he got stuck in traffic in a couple key places. It just didn’t work out, and on his fast lap he was held up in the last corner and lost half a second.”