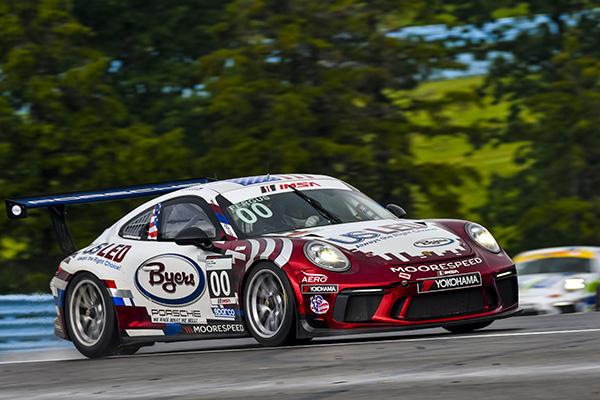 The Moorespeed teammates come to Road America fresh off of their first double-podium performance one race ago at Watkins Glen International in early July. Hardeman scored his second runner-up result of the season in The Glen race and was joined on the podium for the first time by third-place finisher Fergus.

“We have momentum with both Corey and Will where we have been on the podium at every event this year, including both of them simultaneously at Watkins Glen,” said Moorespeed President David Moore. “We intend to do that at Road America too, but this time on the top-two steps.”

One race prior to The Glen, Fergus scored a second-place finish and his first career IMSA Porsche GT3 Cup win in the early May doubleheader at Circuit of The Americas (COTA). Including a third-place finish by Fergus in the second race of the season-opening event weekend at Sebring International Raceway in March, the Moorespeed teammates have visited the podium six times this season.

Hardeman finished second for the first time this season at Barber Motorsports Park in April while the third-place showing by Fergus at The Glen was his third podium result in a row in IMSA Porsche GT3 Cup competition.

Road America will be busy for Mooresped and its competitors as the weekend is now a triple-header event. The Elkhart Lake race was originally scheduled as one of the series’ standard doubleheader weekends, but a postponement of the first sprint at Watkins Glen – the result of a race-stopping multi-car accident after one lap – saw the race rescheduled for Road America.

Another race is a welcome addition at Road America, a classic American road course that is a universal favorite of teams and drivers alike. The Friday addition means IMSA Porsche GT3 Cup will have three-straight days of 45-minute sprint races on the fast four-mile track.

“Road America is my favorite track in the world,” Fergus said. “There’s just something about the atmosphere up there. I like the whole track but the kink is probably the most challenging section, and nailing it is key to a good lap. There are long straights and heavy brake zones. Getting a good run onto the straight so you can’t be passed and conserving your brakes will be key to winning at Road America.”

Hardeman is racing at Road America with Moorespeed for the third-straight year.

“Road America is up there on the track ranking for me, and many drivers will concur,” Hardeman said. “It’s a beautiful venue and most of the corners are straight-forward, unlinked and single apex. The Carousel to Kink is my favorite as it’s the most exhilarating when you use every last bit of track width traveling in fifth gear. For a good lap, every corner is important, although some are tricky to get in or out of at the limit.”

The key to Moorespeed’s success this season is its extra preparation and expanded testing program that provides double the feedback with first-year teammates Fergus and Hardeman working together with coaches Price Cobb, Patrick Pilet and Moore. The support of Byers Porsche has been crucial in making the expanded testing schedule happen.

The most recent Moorespeed test was less than two weeks ago at Virginia International Raceway (VIR), which hosts the IMSA Porsche GT3 Cup event following Road America. Afterwards, both Moorespeed Porsches were part of Byers Imports race week at Mid-Ohio Sports Car Course and in its hometown of Columbus, Ohio, where the company supports the Buckeye Ranch Rally for the Ranch with the Bobby Rahal Foundation.

“For our test at VIR we focused on continuing to develop the relationship between each driver and his car to where everything just clicks,” Moore said. “I think we are getting close to where they know they can trust the car and can push even harder to be at their peak performance and the car’s peak performance. The team is ready and really looking forward to three races at Road America, and we can’t thank Byers Porsche enough for the great support of our testing program this year.”

Following a single official practice session Thursday from 4:20 to 5 p.m. CDT, the Porsche GT3 Cup schedule gets right into it with The Glen “make-up” race at 8:55 a.m. CDT Friday morning. Practice and qualifying for the weekend’s originally scheduled pair of races fills out the rest of Friday’s schedule.

Race one goes green at 11:30 a.m. CDT on Saturday with the second and final 45-minute sprint of the weekend scheduled to go green Sunday at 9:40 a.m. CDT.

– Fergus is third in the IMSA Porsche GT3 Platinum Cup championship standings heading to Road America. He is just three points behind the second-place competitor, 103 – 106, and a string of solid race results in each of this weekend’s trio of races could see Fergus jump to second and cut into the championship leader’s 134-point tally.

– More than just on-track testing has gone into Moorespeed’s between-race preparation this year. “David and I have really enjoyed honing our craft in his new simulator and it’s paying big dividends with our lap times,” Hardeman said. “Stay tuned.”

– Fergus is also spending plenty of time on a simulator. “Corey is also training on a simulator nearly identical to mine,” Moore said. “Kevin King, the General Manager at Byers Porsche asked me what he could do to help Corey and I suggested the simulator. He wasted no time and bought one and set it up next to Corey’s office at the Byers dealership.”

– Fergus won his first SCCA Runoffs National Championship in the Sports 2000 class at Road America. “Road America is special to me for many reasons,” Fergus said. “It’s especially memorable because I qualified on the pole for the SCCA Runoffs four years in a row with a new track record each time, and I finally got my first national championship there in 2012 as well.”

– Moore likes Road America as much as his drivers. “I have been coming to Elkhart Lake since 1988, so I have tons of great memories both on and off the track and always enjoyed meeting the local people,” Moore said. “Even on bad days, Road America is a better place to be than most others. I love this place. It’s old-school fast and proper. To have a great race, you have to stay focused and not be afraid of the gas pedal.”

– Moore went straight to Road Atlanta right after his team’s VIR test. “Yokohama with Porsche Motorsport’s help tested a number of new prototype tires and various combinations for 2018,” said Moore, who was invited to the test as an observer. “I think if all the competitors knew how hard they are working together to try to improve an already very good racing tire they would be very impressed. Everyone needs to realize both Yokohama and Porsche really do care about us and the series and staying proactive in their research.”