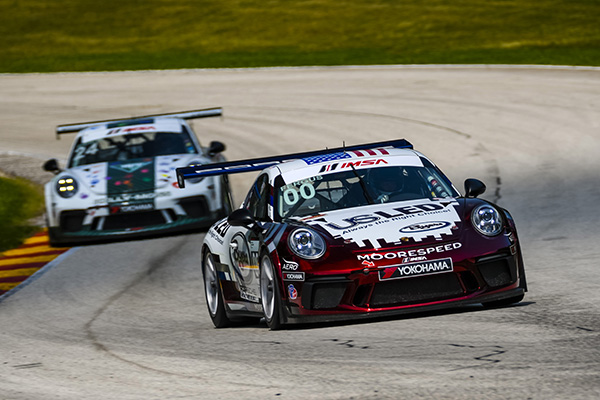 – Second IMSA GT GT3 Cup Victory of the Season for Fergus
– Will Hardeman Fourth in No. 19 CAG/Moorespeed Porsche GT3 Cup

Elkhart Lake, Wisconsin (August 5, 2017) – Corey Fergus scored a flag-to-flag victory from the pole in his No. 00 US LED/Byers/Moorespeed IMSA Porsche GT3 Cup Saturday at Road America, the second of three IMSA GT3 Cup Challenge USA by Yokohama races being run this weekend on the four-mile Wisconsin road course.

After winning the pole in Friday’s qualifying session, Fergus took control of today’s race from the drop of the green flag. He led each of the 19 laps that were completed in the 45-minute timed race, keeping the competition close but never letting them get near enough to make a move for the lead.

Fergus held second-place finisher Jake Eidson at bay throughout the race, including maintaining the lead on a late-race restart with just over 10 minutes remaining.

“This was the perfect day,” Fergus said. “To start from the pole and win is what you want, but it definitely wasn’t easy. I had pressure from Jake the whole race. He stayed right in my mirrors, making me stay at the top of my game. When the late yellow came out that was definitely not my best moment. We went side by side into turn one on the restart and hung on there, both of us, but Jake went a little wide.”

The win is the second of the season for Fergus who was also victorious from the pole in the second round of May’s IMSA Porsche GT3 Cup doubleheader at Circuit of The Americas (COTA).

“It was great,” said Moorespeed President David Moore. “Corey drove a really smart race. He made me a little bit nervous because he was definitely driving conservatively but being smart and very consistent. He managed his tires, did a really good job, and at the end he had some of his fastest race laps.”

The victory followed a fifth-place result by Fergus in Friday’s rainy Watkins Glen “makeup race” at Road America, crossing the finish line just behind Moorespeed teammate Will Hardeman, who finished fourth in the No. 19 CAG/Moorespeed Porsche GT3 Cup.

Hardeman finished fourth again on Saturday but fought to the end for a podium spot, particularly in the final minutes of the race after the late restart. He went nearly side-by-side with Sebastian Landy battling for third as they both closed right up on Eidson.

The close racing saw Hardeman and Landy have contact, including one hit that briefly put some air under the No. 19 CAG/Moorespeed Porsche. Hardeman stayed under control but never had a chance to make another move as the race ended early a few minutes later under the second and final caution of the day.

“Overall I think it was a modest performance on my part,” Hardeman said. “The car was good but we are going to tune it a little bit better for tomorrow. That will allow me to really run P1 and P2 times without any issues. There was some good, clean, hard racing at the beginning but I just let the guys who were over driving in front of me kind of get out of the way. Maybe I was a little too much in my comfort zone for most of the race, but I was there and ready to take the opportunity at the end if we would have had just a little more race time.”

Moore is on the radio with Hardeman during races.

“I think Will struggled a little bit with his car,” Moore said. “We missed the setup a little bit for him. We made some changes earlier in the weekend to – without going into detail – accentuate some things for this track. Will likes a loose car and it just wasn’t quite suited to his style. It was just a little bit out of the window, but as the race went on and the fuel load changed his pace picked up. He had a really good shot at the very end after the yellow flag and, if not for a hit with another car, we could have had a one-two finish.”

The third and final 45-minute sprint of the Road America weekend is scheduled to start tomorrow, Sunday, August 8, at 9:40 a.m. CDT.

– Fergus didn’t have a single miscue on his way to Saturday’s victory. “I think we just didn’t make any mistakes,” Fergus said. “I think that was the key today. No huge mistakes, just driving my line and hitting my marks, and it paid off.”

– Three-time Porsche Cup winner and 1990 24 Hours of Le Mans winning co-driver Price Cobb is one of Fergus’ driving coaches. “I know that Corey likes to lead from the pole, and he did, and he always stayed in control of the race,” Cobb said. “He always kept a lead when he needed it and gave it back when he didn’t. It was really good to watch.”