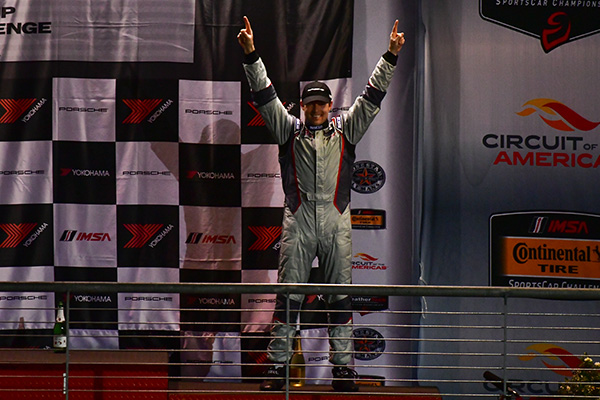 Will Hardeman and Moorespeed Double Up on IMSA GT3 Cup Podiums with Another Third-Place Friday at Circuit of The Americas https://www.moorespeed.com/wp-content/uploads/2018/03/Moorespeed-WillHardeman-Racing-IMSA-Porsche-GT3CupChallenge-7.jpeg 600 400 MOORESPEED MOORESPEED //www.moorespeed.com/wp-content/uploads/2022/04/MOORESPEED-LOGO_2021-version.png September 17, 2016 July 11, 2022

AUSTIN, Texas (September 17, 2016) – Hometown driver Will Hardeman doubled up on podium finishes in IMSA GT3 Cup Challenge USA by Yokohama competition at Circuit of The Americas (COTA) with another third-place overall and Platinum Cup-class result in the No. 19 WPD/Moorespeed Porsche GT3 Cup in Friday’s night race on the 3.427-mile circuit.

In his second-year of a driver development program with the Austin-based Moorespeed racing team, Hardeman enjoyed his best weekend of IMSA GT3 Cup competition to date in front of a large contingent of family, friends and other local supporters.

Just like he did on Thursday, Hardeman raced hard from the drop of Friday’s green flag, passing two competitors on the first race lap to move up to fourth place.

Hardeman then waged what was easily the battle of the race with Ricardo Perez, a tussle for third place that lasted for a couple of laps.

“The highlight of the race wad that I was able to run a smart race, really thinking with my head,” Hardeman said. “I even let Perez by, I gave him an inch but he took a mile, but that’s okay, that’s racing. I saw he was driving really hard to maintain that pace, and I knew in time he would drop back. I was really comfortable with my pace, it was rock solid, I didn’t have to push hard, so I knew I had more tires for the end. And in the end, I did prevail. I had more grip, so when he gave me an inch I took a mile. Right back at you!”

Hardeman used many of the driving tactics he has learned under the guidance of Moorespeed President David Moore, another Austin resident. Hardeman has also been coached by Moorespeed General Manager Price Cobb and current Porsche factory driver, Earl Bamber, both of whom have won the 24 Hours of Le Mans.

“This is our home base for even doing passing drills,” Moore said. “We saw that today. Will closed up to Perez, he finally got him, and I got on the radio knowing he had a good shot off of Turn 11. As close as he was, I told him to get his nose in there. There was one drafting technique that we worked on, I just said one word, and he knew to get it in there. He got around him, and then he had to do it again, because Perez got back by, but Will used the same move again up the front straight. He wasn’t backing down.” 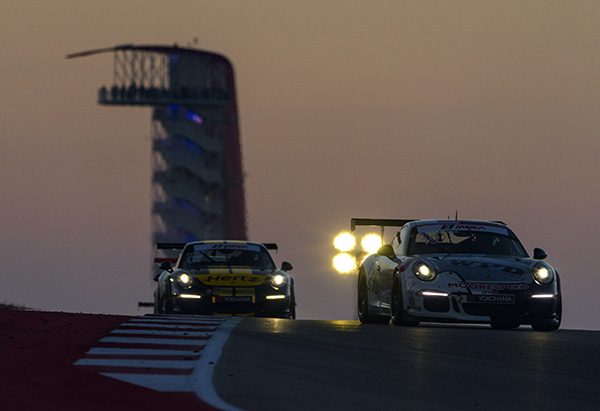 The battle with Perez allowed eventual race winner Jesse Lazare and second-place finisher Daniel Morad a chance to open up a large gap on the field. Racing hard in third but largely by himself for the second half of the race, Hardeman never once lost his concentration.

“Staying on focus while running by myself has traditionally been my problem this season,” Hardeman said. “Really, I’ve been thinking about it a lot more, taking it in bite-size pieces, thinking of the apex and exit of the next corner, not even my braking point anymore. Just that small change has had a lot of positive benefit this weekend.”

Moore and Bamber have both been instrumental in getting Hardeman to understand the need to master the mental side of racing.

“I’ve been talking with David and Earl, and it’s a mental game,” Hardeman said. “Being consistent, just like any athlete that has to be consistent, is all in my head. I feel like I’ve made some really great progress on my mental gains.”

“This weekend definitely was a long time coming,” Read said. “I’ve been working for this all year, and to finally get to this weekend and do it, I felt prepared and ready to go. I had no expectations, I just really wanted to learn and had to realize that most of these guys have a lot more experience in these cars.”

While Lloyd battled for third in Thursday’s race – even making a last-lap pass for the position only to be told by IMSA that the race’s 45-minute time limit had lapsed – he found himself racing mostly on his own on Friday before closing on the third-place competitor in the closing minutes.

“I could gauge that there was another car I was catching,” Read said. “I couldn’t tell if he was in my class or not, so I just put my head down and kept pushing, trying to reel in faster and consistent laps. I think two more laps, even half a lap, and I would have been there, but that’s racing. I was happy to bring the car home and get some night racing experience.” 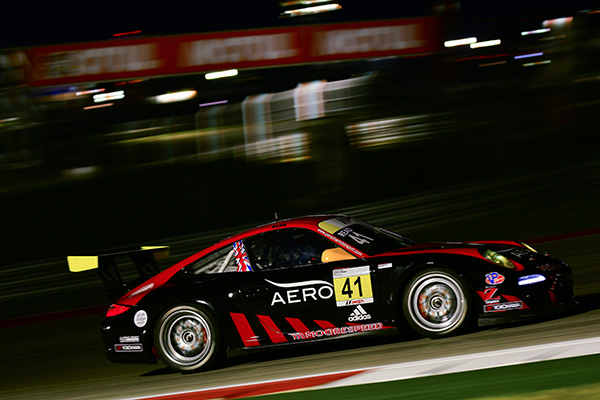 Moore was encouraged by Read’s performance in what was a fairly major change of direction into production car competition. Read’s races this weekend were his first ever in race car with a roof on it.

“We made some progress with Lloyd,” Moore said. “I think he expected a little bit more out of himself, but the single-seat, open-wheel cars he comes from have ground effects and really don’t move around a whole lot. Things happen on a different level here. I told him ‘if you’re going to drive one of these cars you just need to grab it by the jugular and pull.’ I don’t think he understands that feel yet, but once he has it, it will click and he’ll be fast. He has the speed, we’ve seen it, he brought it home, and I think he has a great attitude. Lloyd is a young man that we can work with and help. I think he has a good shot of finding a good career.”

Hardeman, meanwhile, had the chance to celebrate the highlight of his young racing career for two nights in a row, right at home in Austin.

“This could not have worked out better,” Hardeman said. “I’m so happy. We put in the work and it’s so gratifying to know that we’re finally making progress and getting on the podium. There’s been so many near misses this season that it’s hard to get back out there and do it again. Now that we’re making progress, it’s the best weekend in the world. It’s just the best feeling when your hard work pays off.”

Next up for Moorespeed and Hardeman is the season-ending IMSA GT3 Cup doubleheader that will be part of the IMSA Petit Le Mans at Road Atlanta, Thursday, September 29, and Friday, September 30.

– Hardeman spent most of the time between his career-best races babysitting his infant daughter Lily. This week’s busy at-track schedule loosened up during the day on Friday, so Hardeman stepped in and gave his wife Anna a chance to get out of the house.

– Moore had solid praise for not only Hardeman but also Perez for racing cleanly in the battle for third place. “They didn’t touch, they ran clean and you have to give Perez credit because he could have easily touched and hit Will too,” Moore said. “They raced hard, Will finally got around him, and that was exciting racing right there. A year ago he didn’t have that skill. That race craft that we’ve been working on is really starting to develop. He’s got a really decent bag of tricks now.”