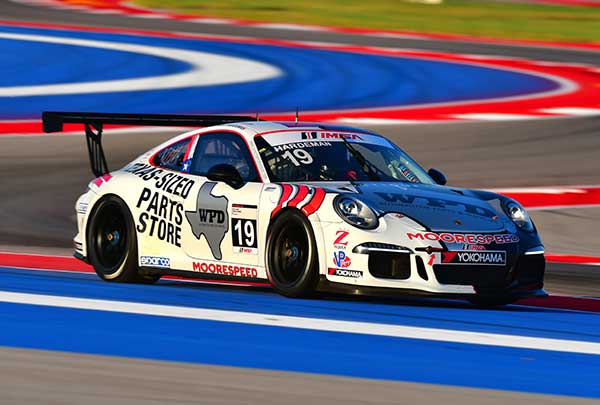 BRASELTON, Georgia (September 28, 2016) – Moorespeed and Will Hardeman bring the momentum of two third-place finishes at Circuit of The Americas (COTA) two weeks ago in the No. 19 WPD/Moorespeed Porsche GT3 Cup to this week’s IMSA GT3 Cup Challenge USA by Yokohama season finale at Road Atlanta where Hardeman will make his race debut on the iconic Georgia circuit.

“We are looking to carry our momentum from podium finishes at COTA into Road Atlanta,” Hardeman said. “We know we have the speed and all the elements to be on the podium, and now we are looking toward the second and first place steps.”

Hardeman is completing just his second year of professional racing, all under the tutelage of Moorespeed’s proven driver development program. The team is led by Moorespeed President David Moore and Moorespeed General Manager Price Cobb, a winning co-driver in the 1990 24 Hours of Le Mans.

Although he has tested at the Georgia track twice with Moorespeed, this week’s doubleheader will be Hardeman’s first races at Road Atlanta.

“I’m going into Road Atlanta with a mind like a sponge, absorbing as much rich content as I can while on track in order to pick up the nuances where the last couple tenths of speed come from,” Hardeman said. “I put in some time on the simulator in order to get my lap times within a couple of seconds, but I always treat the sim as a rough cut for my lines. The finishing touches go on during our live practice sessions.”

Sections of some tracks he and Moorespeed have recently visited remind Hardeman of Road Atlanta.

“Road Atlanta reminds me of some sections of Road America, like the high-speed kink being similar to the final Turn 12 of Road Atlanta,” Hardeman said. “Car handling characteristics are similar in a turn wide open in fourth and fifth gear, some of the more gutsy corners in motorsport.

“Road Atlanta’s descending and then climbing esses remind me of the esses at VIR where we are once again wide open on the power, flying over each apex curb.”

Based in Austin, Hardeman’s and Moorespeed’s recent success came on their home-track at COTA, but Moore and Cobb have decades of experience at Road Atlanta as well.

“There are so many memorable moments, both good and bad, since I first started coming to Road Atlanta 22 years ago,” Moore said. “But without a doubt the memory that means the most to me was when my good friends and mentors, Alex and Holly Job, came to me after a race in which we were leading and had unfortunately crashed out. It was only my second race as a Team Manager in IMSA, we put it on the front row against some pretty formidable competition, but crashed in the race when a differential locked up into Turn 12.

“I was really down after being on an adrenalin high. I remember it well, the Jobs went out of their way to find me, give me a hug and a handshake and said ‘pick your chin up, you belong here, welcome to the club, see you at the next race.’ That means more to me than just about anything, especially coming from those two. I owe a lot to the Jobs as do a lot of folks in the racing family.”

The Road Atlanta IMSA GT3 Cup schedule gets underway today with a pair of afternoon practice sessions at Noon and 4:20 p.m. EDT.

Qualifying is slated for Thursday at 9 a.m. EDT.