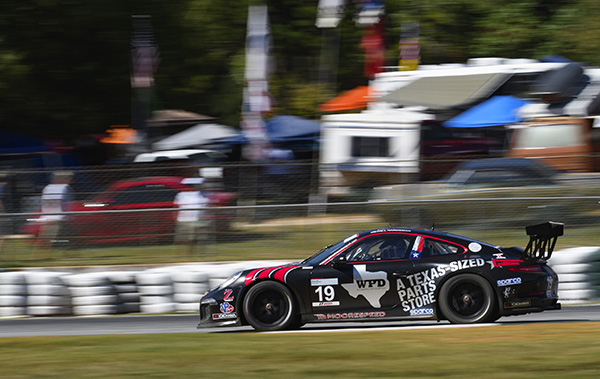 BRASELTON, Georgia (October 1, 2016) – Will Hardeman and Moorespeed closed out the 2016 IMSA GT3 Cup Challenge USA by Yokohama racing season with a solid week of competition at Road Atlanta that saw the No. 19 WPD/Moorespeed Porsche GT3 Cup finish fourth in Friday’s year-end race.

After Hardeman earned a career-best second-place finish in Thursday’s first round of the Road Atlanta doubleheader, he and Moorespeed were looking for an even better result in Friday’s second and final race.

Starting fifth on the grid, Hardeman once again raced to fourth when the green flag dropped, a repeat of his one-position advance at the beginning of Thursday’s race.

“I’ve been really fortunate on starts, and I’m starting to think I have a knack for starts because I get a decent jump,” Hardeman said. “I didn’t get a car length by any means, but a nose is enough, and I pulled to the inside of the guy in front of me who really didn’t defend too much. He was just focused on the guys behind him so I just dove down to the inside.”

Once up to fourth, Hardeman ran in the lead pack and was zeroing in on another podium finish. He kept in touch with the top three while staying ahead of a tight train of competitors in hot pursuit.

Hardeman had a bobble in the fast, downhill run into Road Atlanta’s tricky Turn 10A late in the race but managed to hold on to fourth place and defend the position to the finish.

“I think the phrase that really sums up our year at this point is that water finds its own level, and I’ve really found my own level near the end of this season,” Hardeman said. “I am starting to settle into the podium and top-four territory up against some really competitive guys.”

Hardeman ended the IMSA season with career-best performances in each of the last two races.

Two weeks ago at Circuit of The America (COTA), the home track for both Hardeman and Moorespeed in Austin, Texas, Hardeman scored then career-best third-place finishes in both races. He backed it up with Thursday’s second-place result at Road Atlanta before wrapping up the year with the steady run to fourth place on Friday.

“It’s been a pretty good journey working with Will this season,” said Moorespeed President David Moore. “We missed two race weekends, and if we hadn’t taken those couple races off, we might have been able to get some momentum going sooner and had a little bit more success. This weekend was great and two weekends ago was even better back home. I think we really did well finishing out the year.”

While Moorespeed’s IMSA campaign has wrapped up for 2016, the team will have an announcement this week regarding a two-car program for participation in one additional race weekend this year.