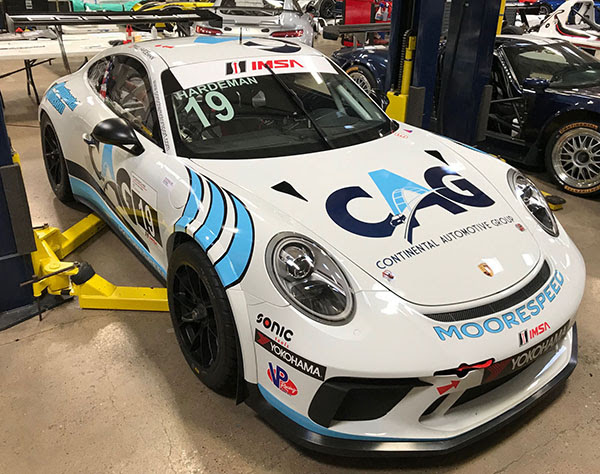 Fourth-Straight Season Together for Moorespeed and Hardeman in No. 19 CAG/Moorespeed Porsche GT3 Cup

SEBRING, Florida (March 15, 2018) – Moorespeed and team driver Will Hardeman will begin their fourth season together in the IMSA Porsche GT3 Cup Challenge USA by Yokohama this week at Sebring International Raceway where the team will launch an all-out bid for the 2018 Platinum Cup Championship in the No. 19 CAG/Moorespeed Porsche GT3 Cup.

“We feel confident this year heading to Sebring,” Hardeman said. “Our opportunities for this season will come from many small things we are doing with driving and setup. After the three previous seasons in IMSA Porsche GT3 cup, I feel comfortable with the tracks and the equipment. Sebring, as always, takes a little getting used to with the bumps and all, but we have laid enough groundwork in the off-season to focus on the smaller details this week at the track.”

A doubleheader scheduled to begin the season, the first 45-minute sprint of the weekend is scheduled to start today, Thursday, March 15, at 4:25 p.m. EDT. The second and final Sebring race takes place Friday, March 16, at 11:25 a.m. EDT.

“Everybody knows Will has raw speed, but up until now he lacked the experience and race-craft of his peers,” said Moorespeed President David Moore. “Last year was a tough IMSA Porsche GT3 Cup season for Will, he had some bad breaks, but he learned from it instead of quitting. It just made him stronger in my opinion and it’s rallied his crew. When we flicked the switch back on in December, we did as much testing, simulation, and rally training as anyone. I know we’ve pushed hard, but he loves the challenge, the puzzle as he says.”

Qualifying for today’s race took place earlier Thursday afternoon but Hardeman never had a chance to drive a lap as quick as he and the No. 19 Moorespeed Porsche can go. A session-ending red flag saw qualifying stopped early and left Hardeman sixth fastest in the Porsche GT3 Cup Challenge USA Platinum Cup division.

This weekend’s races are dual-series events also featuring competitors from the IMSA Porsche GT3 Cup Canada series. The mixed starting grid will see Hardeman roll off from the inside of row seven when the green flag drops for today’s race at 4:25 p.m. EDT.

“We are all focused on simply doing our jobs where no job or task is too small, nothing is too hard, and leave nothing to chance,” Moore said. “Then it’s up to Will to execute the plan to focus on one corner, one lap and one race at a time. If we put our best foot forward, never quit but always focus on finishing and being in the hunt every race where risk versus reward is automatically evaluated. If we can do that, I think this team is ready for any challenge and has as good a shot as anyone.”

Hardeman is looking for a solid showing at Sebring the next two days to set the tone for the rest of the 2018 season.

“Overall, I am looking for consistent running and results in 2018 that will render great results for the year,” Hardeman said. “My objective this year will be to get the most out of the setup of the car and driving the car to the grip available that track conditions allow.”

Moore runs the Moorespeed racing team with General Manager Price Cobb, the 1990 24 Hours of Le Mans-winning co-driver who was a key strategic and coaching resource in 2017’s successful season.

Two-time 24 Hours of Le Mans winner Earl Bamber has also returned to Moorespeed in 2018 where he will join Moore and Cobb in working with Hardeman as an additional coach and mentor.

Live streaming of the Sebring IMSA Porsche GT3 Cup races can be found today and Friday at IMSA.tv and on FansChoice.tv.