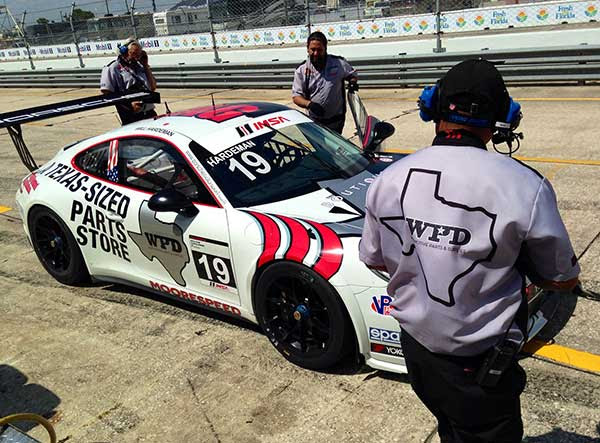 Legendary Sebring Circuit Next Challenge for Hardeman and the No. 19 WPD/Moorespeed Porsche GT3 Cup Team

SEBRING, Florida (March 16, 2016) – Moorespeed and team driver Will Hardeman bring the momentum of a pair of third-place finishes less than two weeks ago on their home track at Circuit of The Americas (COTA) to this week’s season-opening IMSA Porsche GT3 Cup USA by Yokohama doubleheader at Sebring International Raceway, March 17 – 18, in pursuit of more positive results.
Hardeman will drive the No. 19 WPD/Moorespeed Porsche GT3 Cup in both tomorrow’s and Friday’s IMSA openers fresh off of the first podium finishes of his professional racing career at COTA in the Pirelli World Challenge GT Cup class.
“Obviously, I’m coming into this weekend with a lot of momentum,” Hardeman said. “It’s momentum I’ve never had before after getting on the podium at COTA for World Challenge, which we’re very happy about, but Sebring is a whole new ball game. It’s a track that’s so far at the other end of the spectrum from a Formula 1 grade track like COTA. Sebring is extremely bumpy, the laps can be extremely inconsistent because of all the bumps, but I’m feeling good because this is now my second year here.”
Hardeman made his professional racing debut with Moorespeed in last year’s season-opening IMSA Porsche GT3 Cup races at Sebring. Those races were the first rounds of a full season of competition in the competitive IMSA GT3 Cup series, and he returns to Sebring much more confident with the task at hand.
“I’m a lot more confident in the car and my ability and now we’re really chasing the fine minutia of driving the car,” Hardeman said. “Sebring is one of those tracks where if you put a wheel off into the sand it slows you down and sometimes the penalties can be kind of high because you also have concrete walls everywhere. So I am getting comfortable with taking it right up to the very edge on corner exit on some of the bigger turns. We’re taking baby steps right up to the edge and trying not to take a big step over the edge, so that’s one thing that takes a little bit of getting used to.”
Moorespeed President David Moore is a valuable resource of experience for Hardeman and the team at Sebring where he has both driven in competition and run racing teams for decades.
“The first time I came here was more than 20 years ago after a 24 Hours of Daytona,” Moore said. “I was running a team and we came early for a Porsche Club event. We rolled in, there wasn’t anyone here three weeks before the 12 hour race, but there was already a line of RVs waiting to get in for the race. It was so cool, I just felt the presence of Juan Manuel Fangio when I came in the gates, that’s the first thing that came into my head. It was really strange, I’ve always had that feeling here, and I’ve been blessed to be able to be a driver here too. This is one of my favorite tracks.”
[vc_gallery interval=”3″ images=”17415″ img_size=”full”]
The unforgiving and almost torturous nature of Sebring adds to its legend and even its appeal.
“This is an airport course, an old one, it’s got so much character and beats the living crap out of you in the car,” Moore said. “To be fast here you just can’t let up. It’s a battle every lap and it dishes back to you just as hard as what you put into it. Huge crowds here too, lots of fans, the infield at night can be one hell of a show in itself, so I’m looking forward to the event.”
After a track test day Tuesday and opening official IMSA practice today, Thursday’s schedule starts with a 20-minute qualifying session at 9:20 a.m. EDT. The first 45-minute race of the doubleheader is scheduled to go green tomorrow afternoon at 3:50 p.m., with Round 2 slated for 9:10 a.m. on Friday.
About Moorespeed: Based in Austin, Texas, Moorespeed is a full-service automotive company specializing in sales, service, repairs and restoration of luxury sports cars and competition on the track in numerous North American road racing series. Founded in 1991 in Austin by brothers David and Chris Moore, Moorespeed offers comprehensive, turn-key service in which people are just as important as parts and relationships are just as vital as results. Moorespeed’s road racing programs are designed for all skill levels, and driver development, both on and off the track, is a Moorespeed specialty. Dave Moore and General Manager Price Cobb, winner of the 1990 24 Hours of Le Mans, welcome and work with every racing customer as a member of the Moorespeed family while Winslow Mankin brings the same dedication and passion in his role as Street Department Service Manager. Moorespeed is all about the passion for high-performance automobiles and the people who drive them. A commitment to personal service and performance permeates every corner of the company. Learn more atwww.moorespeed.com, contact us at (512) 474-7223, look for us on Twitter @MoorespeedTX and on Facebook at www.facebook.com/MoorespeedRaceEngineering.
Adam Saal
SaalGoodPR@GMail.com
(321) 890-2848
Recent Posts
Categories
Read Previous