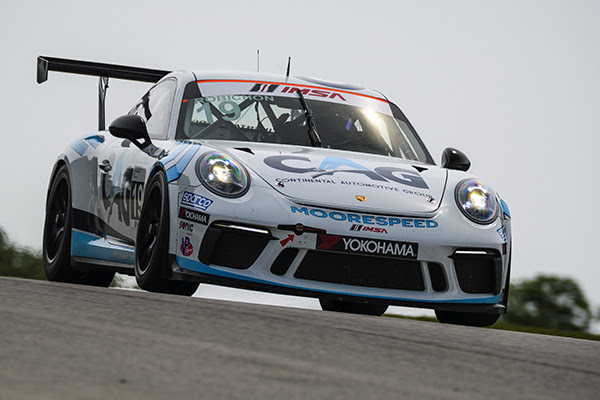 SONOMA, California (September 14, 2018) – Continuing their mission of driver development and maximizing race wins in the IMSA Porsche GT3 Cup Challenge USA by Yokohama, Zach Robichon and Moorespeed will be looking for another victorious weekend in the No. 19 CAG/Moorespeed Porsche GT3 Cup in a pair of 45-minute races this Saturday and Sunday at Sonoma Raceway.

Rounds 13 and 14 on the 2018 schedule, the Sonoma races are the penultimate weekend of the IMSA Porsche GT3 Cup Challenge USA season ahead of next month’s season finale at Road Atlanta at the Motul Petit Le Mans.

Moorespeed and Robichon have teamed up for the final four IMSA Porsche GT3 Cup USA doubleheader race weekends of the year, and it has been a perfect pairing halfway through the schedule.

“We are rolling into this race probably in the same place we were at VIR,” said Moorespeed President David Moore. “We are on a mission to get on the top step of the podium again, it is another track Zach hasn’t been to, but we have done some preparation. You can always do more, both of our schedules have been pretty crazy, but we are ready for the challenge.”

Road America, VIR and this weekend at Sonoma are all first-time tracks for Robichon, a French-Canadian driver from Ottawa who recently clinched the IMSA Ultra 94 Porsche GT3 Cup Challenge Canada by Yokohama series championship back home.

“I am proud of what we achieved in the Canadian series this year but that doesn’t mean anything this weekend,” Robichon said. “Whether it is this weekend, or the last two weekends with Moorespeed that we have done, I am always completely focused on the job at hand. We are back at it on a new track for me, it’s now all about Sonoma and the next three days.”

Robichon proved to be a quick study in his Road America and VIR debuts.

“I have a really high level of confidence in Zach’s ability to learn a new track quickly,” Moore said. “The main thing we have at Sonoma, that we didn’t at our first two races, is that we are here with IndyCar. So, the way our Yokohama tires will perform is a little bit different depending on how the other rubber is laid down. The track is going to keep changing so we need to stay ahead of the changes.”

Robichon arrived at Sonoma for the first time on Thursday and saw similarities in its terrain and elevation changes to Canadian Tire Motorsport Park and Road Atlanta.

“I did a decent amount of preparation on the simulator,” Robichon said. “It gives you the first impression of those hills and the elevation changes, which is something that is going to play into this weekend. We will have to get on top of the setup for this track, it has lots of hills but it’s not intimidating.”

Robichon is filling in at the wheel of the No. 19 CAG/Moorespeed Porsche GT3 Cup for regular team driver Will Hardeman who ran competitively last year with Moorespeed at Sonoma.

“We have good data from last season, and good notes to start off with on chassis setup for Sonoma,” Moore said.

Live Timing & Scoring from all on-track sessions, beginning with today’s practice rounds, is available on IMSA.com.