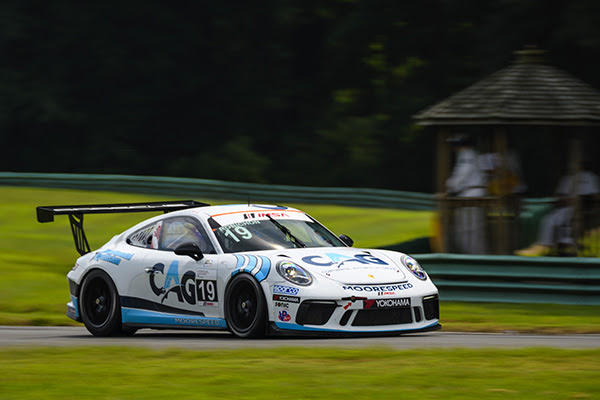 Posted at 04:17h in Moorespeed, Racing by moore3

DANVILLE, Virginia (August 19, 2018) – Zach Robichon and Moorespeed stayed perfect on the season with their fourth IMSA Porsche GT3 Cup Challenge USA by Yokohama race win together in as many races Sunday at VIRginia International Raceway (VIR), but the path to today’s checkered flag was far from easy.

In their previous three victories – a doubleheader sweep at Road America two weeks ago and Saturday at VIR – Robichon and Moorespeed were never challenged in flag-to-flag romps to the checkered flag from the pole.

Robichon started from the pole again for Sunday’s second and final 45-minute race of the weekend but it soon became apparent he and the Moorespeed team were going to have to dig a little deeper to earn their fourth victory.

Robichon led the race’s opening lap only to drop to second place a lap later when he was passed for the lead for the first time since he started driving the CAG/Moorespeed No. 19.

“I made it hard on myself,” Robichon said. “The first two laps I didn’t push hard enough. I got passed, he made a great move, but then I could see his tire pressures were probably higher than ours because a few laps later you could see his rear was flat while ours was still rolling over. I knew he wasn’t going to last the whole race.”

Robichon kept the pressure on and retook the lead with a charging pass down VIR’s front straight into Turn 1 with just under 20 minutes remaining.

Back up front, Robichon appeared ready to check out on the competition but another challenge soon emerged.

“We have always known that Zach has a special talent,” said Moorespeed President David Moore. “We kind of went wrong with the car at the start of the race. We thought the track was going to be different. We went one way and the track went the other. We weren’t terribly concerned about the early pass as we knew the car would come in for us in the last half of the race, but then we had the traffic. It always plays a part here and unfortunately, we got caught up in it.”

Weaving his way through lapped traffic, Robichon encountered a slower competitor in a damaged car in the main racing line. Robichon quickly darted to the right side of the track to avoid contact, but the slight trip off course ripped the No. 19’s front splitter off.

“I was more aggressive today with the traffic because the lead gap I had wasn’t nearly what it was yesterday,” Robichon said. “I thought the lapped car saw me because he went a little bit of a weird way out of the first turn of the esses. I went right, but he obviously didn’t see me, and I had to drop to the grass and hit the curb on the exit. The front splitter came off and it makes for a lot of work. Through the esses and the high-speed corners it’s a handful, and even on the front straight that slight bend becomes a corner.”

Robichon powered on in the jittery Porsche for the race’s final 10 minutes and skillfully managed to hold off a fast-closing competitor for the hard-earned victory.

“It made it interesting,” Moore said. “For the last nine or 10 laps of the race, you could see Zach adjust at every corner the attitude of the car to get it to do what it wouldn’t do. He changed the driving to fit the situation on the car and was just in a class by himself. One day Zach is going to be a really good endurance racer because things happen and you have to be able to manage the equipment. He did a hell of a job today.”

Next up for Robichon and Moorespeed in the IMSA Porsche GT3 Cup Challenge USA by Yokohama is the doubleheader race weekend at Sonoma Raceway, September 14 – 16.

– Moore wasn’t surprised Robichon drove masterfully and held on for the Sunday VIR win even without the front splitter on the CAG/Moorespeed No. 19. “The first time I ever met Zach was three years ago at Road Atlanta where he lost the front splitter, I think on the first or second lap, and he still finished third on the podium at a blistering pace,” Moore said. “I went up to him after that race and told him I was impressed. That was how we met.”

– While Robichon heads home to Canada to close out the IMSA Ultra 94 Porsche GT3 Cup Challenge Canada by Yokohama season next weekend at Canadian Tire Motorsport Park (CTMP), Moorespeed is going straight to work on its 2019 Porsche GT3 Cup driver development program. “We are testing a young man for next season next Wednesday back in Texas,” Moore said. “It’s a one-day test at MSR Houston and then we will get the car back in the shop in Austin and start preparing for Sonoma.”