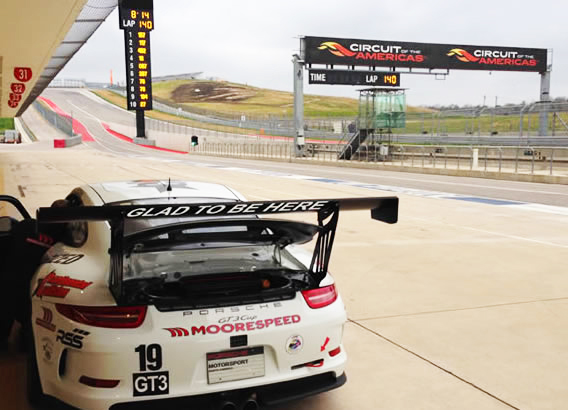 Will Hardeman enthusiastically stated “It was the best test of my life”  Our Two Day Winter Test home at COTA could not have gone better.  The team hasn’t been together since the finale at Laguna.  I needed a break.  The program Dave and the team put me through last year was super intense.  I was still a little worried I might come back at a sub par level.  This winter I thought a lot about the bad habits I’d developed and really worked on eliminating them mentally and it seemed to have paid”.  David Moore echoed Will, “I think we reached another Milestone, maybe the most important to date. Last year we saw some signs late in the season that he was getting close but today after doing two race simulations back to back and he wasn’t sweating, no red face, fresh and the fact that he decided not to use a cool suit or helmet blower just showed how far he’s come.  I know its cheesy but he’s finally become “One with the Car”.  I told him one day it would just click and everything would slow down in his mind, then he could get on with racing instead of just focusing on his driving.  I could not be more pleased.  We ran some very quick laps right out of the gate and came close to his personal best on the Pirelli Tires and shattered his PB on the Yokohama tires”.

The team’s next outing will be at the Promoter Test day part of the season opener for PWC race home at COTA March 3rd.