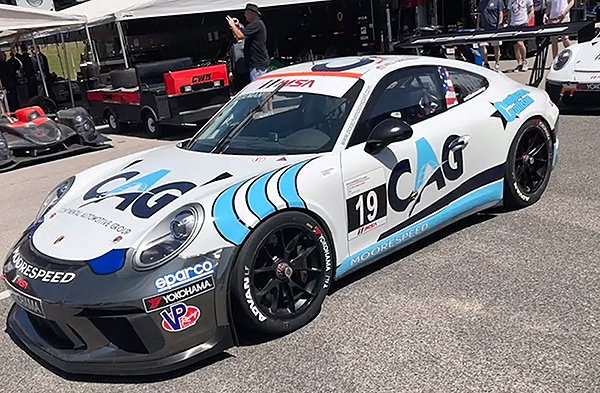 Third and Fourth Place Finishes in No. 19 CAG/Moorespeed Porsche GT3 Cup This Weekend at Barber Keep Hardeman and Moorespeed in 2018 Championship Contention

BIRMINGHAM, Alabama (April 22, 2018) – Will Hardeman and Moorespeed turned in another solid performance in the 2018 IMSA Porsche GT3 Cup Challenge USA by Yokohama this weekend at Barber Motorsports Park, building on a fourth-place finish on Saturday in the No. 19 CAG/Moorespeed Porsche GT3 Cup to score a third-place podium showing in Sunday’s second and final 45-minute race.Hardeman and Moorespeed podiumed for the second year in a row at Barber after a second-place run in race one on the Alabama road course last year. Sunday’s third-place finish was also the second 2018 podium appearance for the No. 19 team in the year’s first four IMSA Porsche GT3 Cup races following a victory in the season-opening weekend of competition at Sebring International Raceway last month.

“I feel really good about where we are at this point,” Hardeman said. “We are right there in the championship, I am feeling really positive and good about how the year is unfolding but it is a long season. The best strategy is to collect points and finish every race, but I know I need to keep pushing hard because there are still opportunities out there for me to qualify better. The competition is stronger than ever and I just can’t let up for one bit at any of these tracks.”

Starting from fifth on the grid in each of the weekend’s races, Hardeman pulled off a key pass for fourth in Saturday’s opening race and then powered through both an opening-lap skirmish and changing dry-to-wet weather conditions for Sunday’s podium.

On the first lap of Sunday’s race, the third and fourth place competitors came together just in front of Hardeman, who sustained some front-end damage to his No. 19 Porsche as he skimmed through the melee and into third place.

“Will lost half of the front splitter when he was battling and got around those guys on the first lap,” said Moorespeed President David Moore. “Then what was left of the right side of the splitter was damaged when Will went a little wide one time exiting the last turn. The two leaders got away early but when Will was in the clean air he was pretty close to being on pace with them. He probably had more tires left for the end than they did, and we thought he had a chance to take it to them, but that’s when it started to rain and then the yellow flag came out.”

Rain began falling around the halfway point of Sunday’s race and minutes later a competitor slid into the Turn 5 gravel trap to bring out the yellow flag. As the showers picked up, the field circulated behind the safety car for the remainder of the race that was checkered under caution.

“Conditions were really changing at the end,” Hardeman said. “The line was morphing from dry to wet and then back to dry in some of the corners, but in some of the training I have been doing and having learned from the wet races I have done, I felt I was as prepared as anyone for that situation. I was feeling pretty good about finding the fast line and we just focused on keeping the tires as hot as possible in anticipation of a restart. We were ready if we had gone green again.” 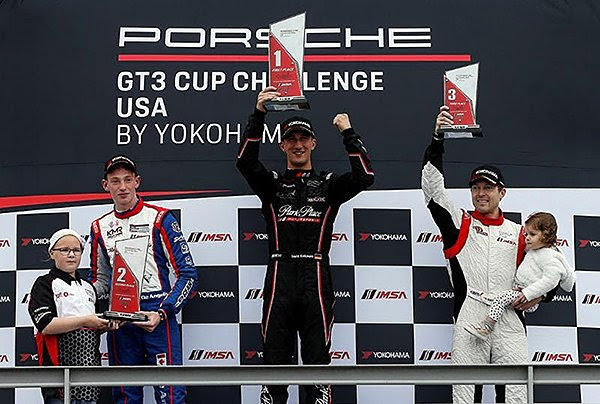 The variety of racing series competing this weekend at Barber – all on different brands of tires – and Sunday’s mix of dry and wet weather made for a constantly changing 2.38-mile track.

Being able to capably relate to the Moorespeed team how the No. 19 Porsche was reacting to the ever-changing track conditions is indicative of the progress Hardeman has made as a complete driver in the four years he has been racing with Moorespeed.

“I just feel like our driving is becoming that much more professional this year,” Hardeman said. “After every practice session, qualifying and each race we just redouble our efforts, work with what we have and maximize to get the most out of the opportunities that present themselves.”

Moore knew his driver and car were up to a late challenge for the Sunday win if the race had been able to be restarted.

“We were pretty keyed up and ready to go for a win but third place in these conditions after starting fifth and coming away with some good points keeps us right in the thick of the championship,” Moore said. “The points race is tightening up, we are right in it and that’s what we are trying to accomplish here. We want to stay in the hunt right to the end if we can and have a shot.”

Coming into the Barber weekend second in the IMSA Porsche GT3 Platinum Cup championship standings four points behind the class leader, Hardeman has now closed to just one point out of first place, 122 – 121, in the unofficial standings.

Next, up for Hardeman, Moorespeed and the IMSA Porsche GT3 Cup Challenge USA by Yokohama is Rounds 5 and 6 of the 2018 season at Mid-Ohio Sports Car Course, May 4 – 6.