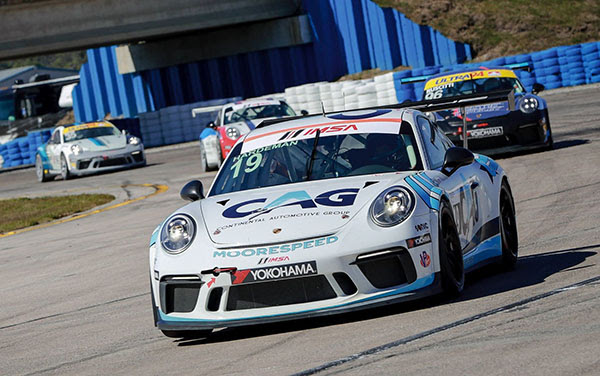 Hardeman and Moorespeed set to Continue Season-Opening Momentum in the No. 19 CAG/Moorespeed Porsche GT3 Cup

BIRMINGHAM, Alabama (April 19, 2018) – Following their victory at Sebring International Raceway, Will Hardeman and the Moorespeed racing team will continue to pursue their goal of being IMSA Porsche GT3 Cup Challenge USA by Yokohama championship contenders in the No. 19 CAG/Moorespeed Porsche GT3 Cup this weekend in a Saturday and Sunday doubleheader at Barber Motorsports Park
Rounds 3 and 4 of the 16-race 2018 season, Saturday’s first 45-minute sprint is scheduled to start at 11:50 a.m. CDT. The second and final 45-minute race of the weekend will go green Sunday at 8:45 a.m. CDT.
Hardeman finished second in the first IMSA Porsche GT3 Cup race of the Barber weekend last year but now knows the path to the top step of the podium after the breakout victory at Sebring on March 16.
“I now know what it takes to win a race and, for me, I can’t let up one bit,” Hardeman said. “I need to maximize every opportunity in setup and driving and give no quarter to any competitor. I know what success feels like and I know how to repeat that performance.”
In total, 2018 has moved off to the best start for Hardeman and Moorespeed in the four years they have raced together. Hardeman was testing a Radical Cup North America race car on the Austin-based team’s home track of Circuit of The Americas (COTA) the day after the Sebring win. That following weekend, Hardeman drove the same No. 8 Moorespeed Radical SR8 to his first race win in the Radical Cup North America series at COTA on March 25.
Hardeman and Moorespeed compete in the top-tier Platinum Cup class in the IMSA Porsche GT3 series, a championship known for producing star drivers and strong competition.
“Sebring is over, now all eyes are on Barber,” said Moorespeed President David Moore. “We tested here earlier in the year and have continued our preparation routine for this race. With that data and video, as well as last year’s archives, we will continue to work on improving, especially in the areas we are lacking. We also spent quite a bit of time on the simulator as part of all the homework.”

Testing and intense off-track preparation have been a key part of the strong 2018 start. Hardeman and Moore can frequently be found most mornings back home in Austin on the team’s simulator preparing for the next race.
“We are just applying the same strategy we have been working on since last season,” Hardeman said. “A full 85% of this strategy is preparation before we get to the race weekend. Testing, simulator time and staying in shape are all part of this.”
The hard work appears to be paying off.
“Will keeps getting better as more race craft and confidence develops,” Moore said. “We know where he was weak and why at Sebring, and we have been working on that to make sure it does not carry over into the remainder of the races. The main thing for Will is to trust himself and really focus turn by turn, lap by lap.”
The Barber IMSA Porsche GT3 Cup event begins with an unofficial test session today. Official competition starts Friday with a pair of practice sessions.
Saturday’s schedule begins with a 15-minute qualifying session at 8 a.m. CDT, which will quickly be followed by Race 1 at the 11:50 a.m. CDT time slot.
The starting grid for Sunday’s second race at 8:45 a.m. CDT will be established by the fastest lap times in Race 1. Both races will be streamed live on IMSA.com.
Recent Posts
Categories
Read Previous