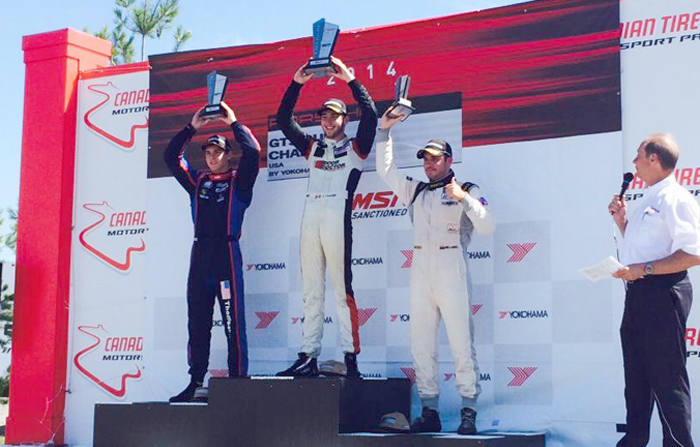 Door Doctor/Moorespeed's Jesse Lazare takes his first career GT win at the Canadian Tire Motorsports Park in Bomanville Ontario Saturday, July 12th in the Porsche GT3 Cup Challenge USA by Yokohama. It was a four-man race for the most part of the race that tightened up the last few laps as the top four runners led by Jesse Lazare ran began working their way lapping the back of the field. Jesse was taken out of the Friday race by Angel Benitez Jr. sitting in second place who along with Colin Thompson and winner of race one, Sloan Urry looked for an opportunity that the young Lazare never afforded them. Team Manager Price Cobb came on the radio, "Jess you have 10 laps to go, drive them like qualifying laps and the win is yours". And that's exactly what young Canadian Jesse Lazare did, taking his first win In the Porsche GT3...

Le Mans Winner Helps Guide Young Canadian Star Jesse Lazare wanted to further his racing career, a challenge in its own right. But rather than just finding help, he found a mentor to push him and a series that gives him tough competition. Canadian Lazare, 17, is the driver of the No. 31 Door Doctor/Moorespeed Porsche 911 GT3 Cup car fielded by Moorespeed in the Porsche GT3 Cup Challenge USA by Yokohama. Original article courtesy IMSA: http://www.imsa.com/articles/lazare-finds-home-legend-cobb   The team is run by 1990 24 Hours of Le Mans winner Price Cobb, who is much more than a general manager for Montreal resident Lazare – he’s a mentor and confidant. “Price is everything,” Lazare said. “He helps everyone out. He helps me, he helps the mechanics, and he’s even booking the hotels. It’s great to have him work with me. I never have to double-think on if he’s giving me the right information. I... 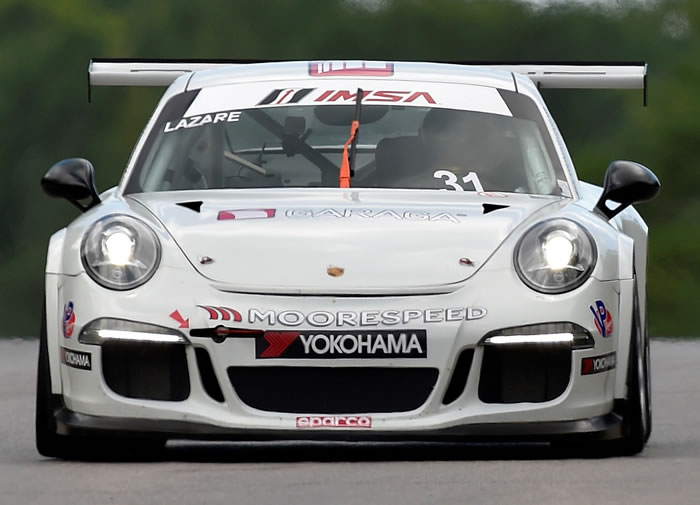 Lewis, Nielsen In Close Pursuit Of Teen Rookie Jesse Lazare is the only full-time driver from Canada in the Porsche GT3 Cup Challenge USA by Yokohama, and he put that local knowledge to good use Friday to lead the opening day of practice at Canadian Tire Motorsport Park. Lazare, 17, from Montreal, turned a top lap of 1 minute, 20.565 seconds in the No. 31 Door Doctor/Moorespeed Porsche 911 GT3 Cup car during the afternoon practice. Series rookie Lazare is a three-time Canadian karting champion who considers the 10-turn, 2.459-mile circuit at CTMP as his home track. Fellow series rookie Michael Lewis was just behind Lazare in second on the speed charts, with a top lap of 1:20.584 during the morning session in the No. 98 Competition Motorsports/Curb-Agajanian entry. Lewis is third in the championship with two victories this season. Another series rookie, Christina Nielsen, benefited from track knowledge with the third-best... 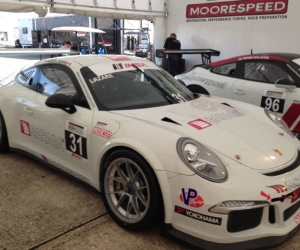 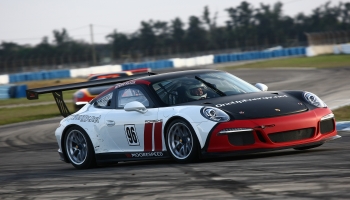