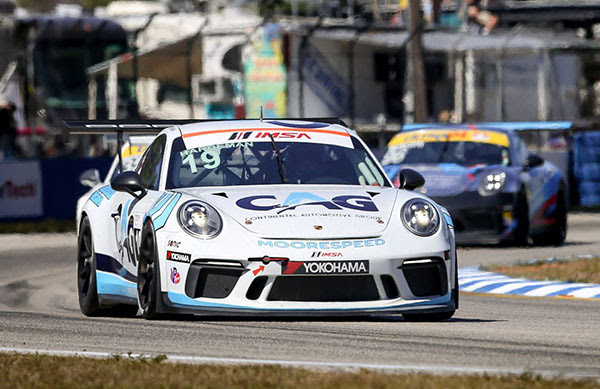 Zacharie Robichon Steps in For Will Hardeman in No. 19 CAG/Moorespeed Porsche GT3 Cup

– IMSA Ultra 94 Porsche GT3 Cup Challenge Canada by Yokohama Points Leader Steps in for Fourth-Year Moorespeed Driver Will Hardeman in Porsche GT3 Cup USA Series
– Robichon Debuts in No. 19 CAG/Moorespeed Porsche GT3 Cup Next Weekend in IMSA Porsche GT3 Cup USA Road America Doubleheader
AUSTIN, Texas (July 25, 2018) – Moorespeed and Continental Auto Group (CAG) return to the IMSA Porsche GT3 Cup Challenge USA by Yokohama series for the final four race weekends of the 2018 season that will see top Canadian driver Zacharie Robichon fill in for Will Hardeman at the wheel of the No. 19 CAG/Moorespeed Porsche GT3 Cup.
The winning partnership pairs up one of the fastest Porsche GT3 Cup drivers in North America with a Moorespeed team that was amid a breakout season with fourth-year team driver Hardeman earlier in 2018.
After earning their first race win together to open the season at Sebring International Raceway in March, Hardeman stepped out of the CAG/Moorespeed No. 19 for personal reasons just prior to last month’s most recent rounds of the series at Watkins Glen International.
Hardeman remains 100% focused on the recent and unexpected family obligation, but he has fully committed both his personal support and the support of CAG to Moorespeed’s continuation in IMSA GT3 Cup USA with Robichon.
“I’m truly looking forward to the opportunity to be at the wheel of the No. 19 CAG/Moorespeed Porsche GT3 Cup car,” Robichon said. “Some tough circumstances have forced Will out of the car for now. This is not the way I want to step in, but David Moore reached out and we were able to make a deal to go racing. My goal will be to keep the No. 19 where it belongs, fighting at the front.”
Hardeman and the Moorespeed team most recently saw Robichon at the March Sebring race, which was a dual-event weekend for the IMSA Porsche GT3 Cup USA and Canadian series. In Friday’s second and final race, Robichon won overall and took Canadian series honors and was closely followed across the finish line by Hardeman, who won his first USA series race.”
“We are looking forward to Zach carrying the torch for not only Will but the entire Moorespeed team in continuing to compete for podiums,” said Moorespeed President David Moore. “Will and I shared a ride with Zach back to the paddock after the drivers meeting at Sebring this year and we actually talked about those two guys finishing on the top step that weekend. Then they both did it, we just had a feeling. It is unfortunate circumstances that have brought us together, but we will make the best of it.”

After earning series runner-up honors in the top-tier Platinum Cup class in 2017, Robichon is leading the 2018 IMSA Ultra 94 Porsche GT3 Cup Challenge Canada by Yokohama championship with two race weekends remaining. He has won a season-high seven GT3 Cup Challenge Canada races this year.
“With two race weekends still to go in the Canadian GT3 Cup season, there is still a lot that can happen,” Robichon said. “Mark Motors has been with me for the past three seasons in Canada and are supportive of me running with Moorespeed for the remainder of the year. The additional weekends won’t distract me from my task back home to win the championship. If anything, these additional race weekends with Moorespeed will allow me to keep improving, as I truly believe that every time you’re in a car you get better.”
Robichon debuts in the CAG/Moorespeed No. 19 at Road America for Rounds 9 and 10 of the 2018 IMSA Porsche GT3 Cup USA season next Saturday, August 4, and Sunday, August 5, respectively.
With all IMSA Porsche GT3 Cup USA race weekend’s featuring a pair of 45-minute races, Moorespeed and Robichon will next compete in Rounds 11 and 12 at Virginia International Raceway (VIR), August 17 – 19, Rounds 13 and 14 at Sonoma Raceway, September 14 – 16, and the season-ending pair of races at Road Atlanta, October 10 – 13.
“Moorespeed has shown incredible success all around in Porsche GT3 cup since I’ve been involved,” Robichon said. “To get the opportunity to represent them is a huge honor. Although I have not been to three of the four tracks we will be running, I am confident Moorespeed will help me learn the tracks and provide me with everything required to get comfortable and competitive.”
Road Atlanta is the only track of the four on which Robichon has previously competed, and it was on the Georgia circuit a few years ago where Moore first noticed the quick Canadian.
“Zach caught my eye a few years ago at Road Atlanta with a stellar run with no front splitter,” Moore said. “Our GT3 Cup program is designed to help develop drivers into the Porsche family, and we believe that with the right equipment, proper preparation and a little bit of luck, Zach – just like Will – can compete for the top step anywhere. He has proven it in the Canadian series, and our team is looking forward to the same challenge here in the USA series. We will do as we always have and work hard at putting our best foot forward to give our driver the best chance possible.”
Robichon’s preparation with Moorespeed starts immediately. He joins the team at its Austin, Texas headquarters today for work with Moore on the team’s state-of-the-art race simulator. Moorespeed and Robichon will also participate in next Thursday’s unofficial test day leading into the three-day Road America weekend.
“Zach is flying down to work on the simulator with me this week,” Moore said. “Will is scheduled to join as well as he is still a big part of our program, our family, and helping us find new teammates as we prepare for 2019.”
Following the Thursday test, the Road America IMSA Porsche GT3 Cup weekend officially begins with practice and qualifying, Friday, August 3.
The first 45-minute race of the weekend starts at 11:30 a.m. CDT, Saturday, August 4, with Sunday’s final round set to go green at 9:40 a.m. CDT. Both races can be viewed live at www.IMSA.tv.
Recent Posts
Categories