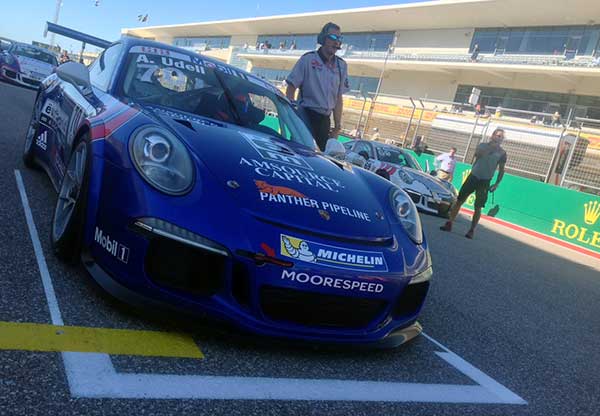 AUSTIN, Texas (October 22, 2016) – Moorespeed and team drivers Will Hardeman and Alec Udell fought hard to the finish of Saturday’s Porsche Mobil 1 Supercup race at Circuit of The Americas (COTA) where Udell placed 11th in the No. 70 Euroworld Motorsports/Panther Pipeline/Moorespeed Porsche GT3 and Hardeman was 17th In No. 69 WPD/Moorespeed Porsche GT3.

Both Udell and Hardeman, who qualified 16th and 18th respectively earlier on Saturday, improved on their starting positions and would have likely finished in the top-10 if not for a pair of early spins.

“They did a really good job,” said Moorespeed President David Moore. “Today they both had really good race pace. Unfortunately, Will got tagged, went all the way back to dead last but got 10 positions back to finish 17th on the leader’s pace. Alec would have finished in the top-10 if not for sticking his nose under another guy he was having trouble getting around, and the guy shut the door on him.”

Making the most of the standing race start that is a signature part of the Supercup series, Udell and Hardeman battled for position from the moment the light turned green.

“The start was good,” said Hardeman, who made the first standing start of his career. “I was a little focused on what was going on up in front of me, and one guy got up to the inside of me going into turn one. That’s OK, lesson learned, I have got to defend a little bit better, but my focus was really on getting around turn one.”

Udell made his first standing start in more than a year and ended up racing with none other than Hardeman as the field cleared turn one. 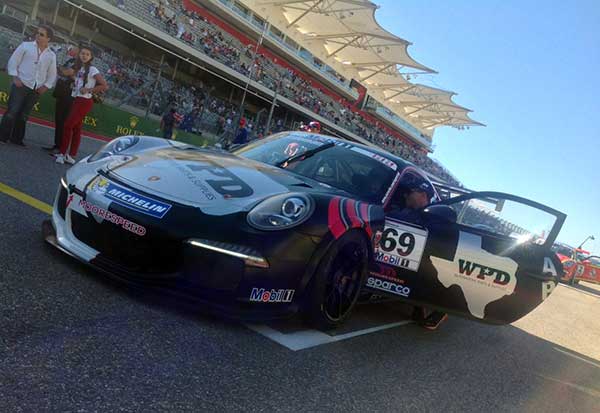 “I didn’t get quite the quickest launch, and I was about average I’d say in getting off the line, but I will be a little bit better tomorrow,” Udell said. “Will and I had a little bit of a battle on the first lap, and that was fun, and then it was just about getting as much track position as I could while all the cars were packed up together. There was a little bit of bumping and banging, which you would expect at this level of competition, and nobody was giving an inch. You have to fight for everything out there.”

Udell and Hardeman each picked up a few spots in the first two laps of the race before the cut-throat nature of Supercup competition emerged for both drivers. On lap three, Hardeman was cleanly alongside another competitor and completing an inside pass for position going into turn eight only to have the other driver turn in on him.

“I think he intentionally shunted me because he didn’t like that I was coming up on him,” Hardeman said. “I made an out-braking maneuver, a classic move, and he came in and touched the back of me and spun me out. I quickly recollected the car, there wasn’t any damage, and I made some passes and got the most out of the rest of my race.”

Udell was working on cracking the top-10 when he too gained some first-hand experience in the school of Supercup hard knocks.

“I was coming out of turn seven into turn eight with a full head of steam and the guy kind of saw me coming,” Udell said. “He didn’t leave me any room, I just tapped him a little bit, but it was enough to unsettle the car and spin me around. I didn’t stall, kept the car running, dropped it to second gear and kept going. It didn’t hurt the tires too bad and I was able to keep the car on a pretty solid pace for the rest of the race.” 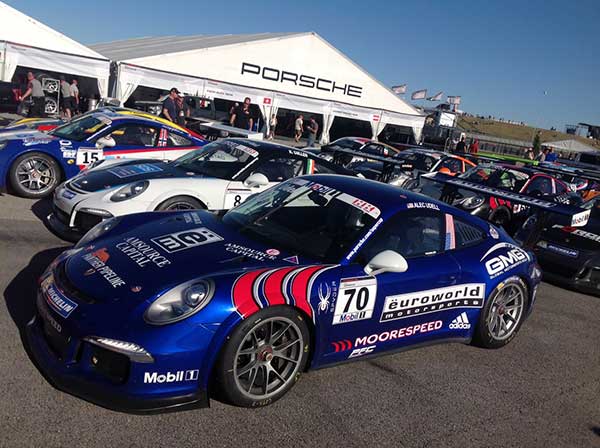 The Porsche Mobil 1 Supercup schedule at the U.S. Grand Prix concludes Sunday with the second and final 14-lap race of the weekend starting at 11:30 a.m. CDT.

“We are setup good for tomorrow,” Moore said. “Both guys were on the race leaders pace, which I am very pleased about, but things happen. Both of our guys finished, we did a good job, and we can hold our heads high. Hopefully we can stay out of trouble and run a clean race on Sunday.”

– Moorespeed’s two-Porsche effort is carrying the flag for both the United States and the State of Texas in the Porsche Mobil 1 Supercup doubleheader at COTA this weekend. Hardeman and Udell are the only U.S. drivers in the field, and Moorespeed is the only team that regularly competes in top-tier American GT3 Cup racing entered in the race. Moore and Hardeman are based in Austin, and the Moorespeed race shop is located just minutes from the COTA front gate. Udell is from Houston.

– Moorespeed and its drivers nearly qualified in the top-10 on Saturday morning. Both drivers were on session-fastest flying laps that would have been good enough for top-10 starting berths when a red flag was shown for an on-track incident. The session was stopped and Hardeman and Udell never had a chance to complete the fast laps.

– The Supercup learning curve has been positive but steep for Moorespeed. “We are still playing catch up on learning the tires but the guys are pretty quick studies,” Moore said. “I am really pleased with how well the guys have learned the differences in these tires. Alec has been primarily on the Pirelli and Will had been primarily on the Yokohama, and both of those tires are very different than the Michelin. Learning that has been key.”

– Udell is making his Supercup debut just two weeks after winning the Pirelli World Challenge GT3 Cup 2016 Championship. “I was on the same pace as the leaders out of today’s race, so I feel like that’s pretty good,” Udell said. “I was running what the leaders were running at the end of the race there. We are a lot better off than we were in qualifying and that is just a little bit of not hitting the peak right on the tires. That is something that we have to learn a little bit but ultimately we ended up pretty good. This is a day I can be pretty proud of. I was shooting for a top-10, we were almost right there in 11th, so I still have a little bit of work to do for tomorrow.”