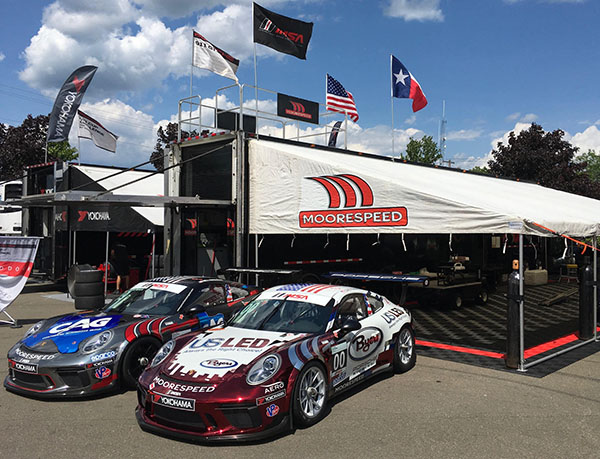 WATKINS GLEN, New York (June 29, 2017) – Moorespeed and its driver duo of Corey Fergus and Will Hardeman will be looking for the team’s second-straight race win in the IMSA GT3 Cup Challenge USA by Yokohama this weekend at Watkins Glen International where a Friday and Saturday doubleheader will be the respective seventh and eighth rounds of the 2017 series.

Fergus scored his first Porsche GT3 Cup victory one race ago in the second of two sprints at Circuit of The Americas (COTA) in the No. 00 US LED/Byers/Moorespeed Porsche GT3 Cup. The win followed a second-place finish a day earlier in the first COTA race that, combined with a third-place finish at Sebring in March, has given Fergus podium finishes in half of the year’s first six races.

Hardeman in turn finished second in the No. 19 CAG/Moorespeed Porsche GT3 Cup in race one at Barber Motorsports Park in April, which gives Moorespeed a solid record of at least one podium finish in each of this year’s first three race weekends. Combined, Fergus and Hardeman have represented Moorespeed on the IMSA GT3 Cup podium in four of the year’s first six races.

“It’s all about our guys peaking at the right time and getting into the flow,” said Moorespeed President David Moore. “Corey, Will and the entire team have been preparing hard. We look forward to getting to Watkins Glen and executing our plan. We were pretty strong and dialed-in during testing there two weeks ago.”

Fergus is in his first year with Moorespeed, but brings a champion’s resume to the Austin, Texas-based team. His breakout win at COTA came at Moorespeed’s home track.

“Circuit of The Americas is obviously a pretty amazing facility, but with Watkins Glen’s new repave I’d say they’re almost on the same level,” Fergus said. “The biggest difference is COTA has a lot more room for error. Watkins Glen drives more like a street course, with guardrail on all sides.”

Fergus will race at Watkins Glen for the first time since 2014 while Hardeman will be back for his second race weekend at the track after debuting there in 2015.

“The entire place has so much character on and off the track,” Hardeman said. “It is a wonderful venue on our schedule that we are fortunate enough to enjoy. My favorite sections of the track would have to be the esses and bus stop. These are some of the most high speed sections in all of motorsports that remind me what I love about racing every time I go through them. Conversely, Watkins Glen can play tricks on you with the constant changes in elevation and camber, where no two successive turns are driven with the same style. That’s the challenging part.”

The Porsche GT3 Cup Challenge USA by Yokohama will run a pair of 45-minute races this weekend. Race one is scheduled to start this Friday, June 30, at 6 p.m. EDT with round two taking the green flag on Saturday, July 1 at 10:30 a.m. EDT.

“My first visit to Watkins Glen was driving a Porsche 964 Carrera Cup car, and I immediately gelled with the track,” Moore said. “It is superfast and fun and a beautiful track that just fits perfectly into the hills, which are quite spectacular. Like Sebring and Road America, you just feel the history there. The fans are fantastic and some of the best anywhere, the surrounding area is stunning everywhere you go, and the entire town just eats and sleeps road racing. Love the place and many fond memories there.”

Fergus, son of 1991 IMSA GTU Champion John Fergus, is a third-generation driver that bring his family’s own winning history back to The Glen.

“This track is particularly special to my family because I’m the third generation to race there,” Fergus said. “My Great Uncle Robert Fergus raced in the 1952 and 1954 Watkins Glen Grand Prix Queen Catherine Cup. I think I watched my dad race at Watkins Glen when I was younger, but my first time racing there was in 2012 in IMSA’s Continental Tire Sports Car Challenge. My last time there was 2014, so I’m excited to be going back.”

Live streaming of both Watkins Glen races can be viewed at IMSA.tv with the IMSA Radio broadcast and live timing available at IMSA.com.

– Moorespeed is supporting the patriotic-themed race car livery promotion during the overall IMSA race weekend at The Glen, June 29 – July 2. Each Moorespeed Porsche has a large American Flag on the roof, joining their fellow IMSA competitors in acknowledging the Fourth of July and showing appreciation for the U.S. Military during the holiday race weekend.

– Watkins Glen is a universal favorite among racers but requires 100% focus from teams and drivers. “Watkins Glen is Watkins Glen, one of our all-time favorites, a real race track,” Moore said. “You have to ‘man-up’ and be ultra-smooth and precise to go fast. With little or no room for error, focus is key.”