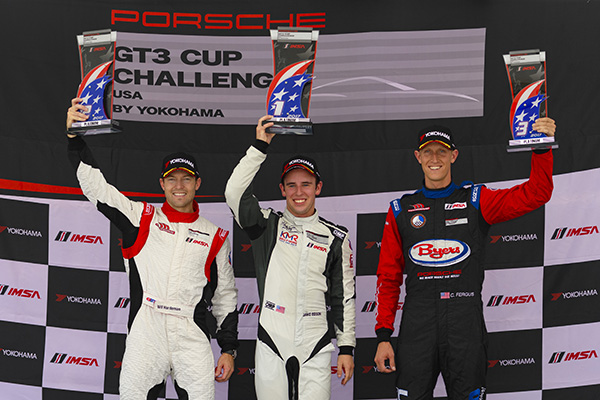 The Watkins Glen round featured the Porsche GT3 Cup Challenge USA competitors racing for class and overall honors with the teams and drivers of the Porsche GT3 Cup Challenge Canada. The mix made for some great competition in rainy conditions and gave Hardeman two post-race visits to the victory lane podium as he finished third overall, in addition to earning his third career GT3 Cup USA runner-up finish.

Fergus also raced his way into the overall top five throughout the race, passing GT3 Cup USA competitor Anthony Imperato in the late stages for a fourth-place overall finish along with his third-place USA series showing.

The third-place finish was the third podium result in a row for Fergus in GT3 Cup USA competition, following his victory and a second-place result one race ago at Circuit of The Americas (COTA).

“It was a good day for us,” said Moorespeed President David Moore. “The guys drove really well, and we got good points for both guys. They were consistent, quick and stayed out of trouble and it was a good double podium for us. It was the first time Will and Corey have been on the podium together, and that has been our goal since day one. We will continue to do that, and it will be our goal every time we go to the track.”

Both Hardeman and Fergus ran competitively but clean throughout the race, steering clear of the myriad of problems associated with racing in the rain that caught more than one of their competitors out.

“Every time you roll out in the rain for a race it’s very unpredictable, but there’s a lot more opportunity, to be quite honest,” Hardeman said. “All I did was stick to the basics of the rain line and, once the track starts to dry out, merge into a dry line. Just stick to the basics and repeat. I didn’t make too many mistakes and my pace was good, I was just ‘Steady Eddie’ all race right to a second-place podium.”

Fergus briefly fell out of the top five in the opening minutes of the race but soon worked his way back into the lead pack. His late battle with Imperato for the final podium position was a highlight of the race.

“It was a little dicey out there today,” Fergus said. “I think in the beginning I was struggling but just staying out of trouble was key today. There were a lot of incidents around me, in my mirrors, in front of me, so I just kept it clean. I did make two exciting passes to get back on the podium, but it wasn’t a cake walk, especially passing Imperato with five minutes to go.”

Hardeman’s second-place finish came in a Porsche Moorespeed entirely rebuilt after the No. 19 was taken out early in a heavy accident in race one at COTA. Hardeman was uninjured in the incident but he missed the second round at COTA.

“I think it is great seeing Will, after COTA and having to sit out pretty much the full weekend after being taken out, to get back in the saddle today,” Moore said. “I kind of expected it out of him. He had that look in his eyes, I know him so well, and I can tell when he is on his game. I knew he had a pretty good shot.”

Next up for Moorespeed and the IMSA GT3 Cup Challenge USA by Yokohama is another doubleheader race weekend at Road America, in Elkhart Lake, Wisconsin, August 3 – 6.

– A heavy accident less than two laps into Friday’s first round of the scheduled doubleheader at The Glen forced the race to be postponed. None of the drivers involved in the wreck were seriously injured but race officials correctly decided to postpone the race until a later date on the 2017 schedule. Neither Moorespeed Porsche got caught up in the incident. “It was unfortunate what happened Friday,” Moore said. “We are looking forward to making up that race, and hopefully soon.”

– Moorespeed General Manager Price Cobb, who retired from race car driving after an accomplished career that saw him co-drive to the overall win in the 1990 24 Hours of Le Mans, has some winning history at Watkins Glen. He and co-driver Vern Schuppan scored a last-to-first victory in an IMSA Camel GT race at The Glen 30 years ago, on Sunday, July 5, 1987, in a Dyson Racing Porsche 962. “It was a lot fun,” Cobb said. “Our main car broke in qualifying so we grabbed an older 962 off the truck and started dead last. I just made one of those wild maneuvers at the start and got away with it. I passed everybody on the inside, hit the brakes like crazy, and I am pretty sure I was third by the time we got to the first corner. It was a good race, and Vern could really pick them up and put them down too, so we came home a winner.”