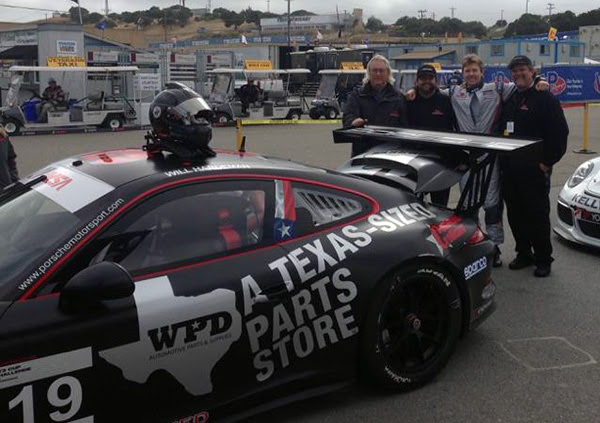 MONTEREY, California (April 28, 2016) – Moorespeed and second-year team driver Will Hardeman qualified an IMSA Porsche GT3 Cup USA by Yokohama career-best second in the No. 19 WPD/Moorespeed Porsche GT3 Cup Thursday for this weekend’s doubleheader at Laguna Seca.
Hardeman turned a top qualifying lap time of 1:28.933 (90.594 mph) and will start from the outside front row inFriday’s first 45-minute race that goes green at 3:40 p.m. PDT.
“It was another solid step of progress today and we couldn’t be happier,” said Moorespeed President David Moore. “All of the hard work with Will last season and the major steps we have already taken this year are paying off. We continue to reach new levels in our driver development program, today was no exception, and now we will keep up the hard work straight through the next two days of racing.”
Thursday’s milestone qualifying effort continued a recent run of momentum for Moorespeed, Hardeman and the No. 19 team that carried over from last month’s season-opening event at Sebring International Raceway.
Moorespeed and Hardeman finished sixth in the first race at Sebring and then charged from fourth to second in the opening laps of the second sprint, pulling off a pair of key passes for position.
Moorespeed and Hardeman also showed well at Laguna Seca in 2015’s season-ending IMSA GT3 Cup finale last September, finishing ninth and seventh in that weekend’s doubleheader. Hardeman called on some of that experience today.
“Laguna Seca requires constant driving with many linked corners and not many areas to relax,” Hardeman said. “When driving off line, the grip level falls off pretty fast too due to sand on the track. I also like the fact that Laguna Seca makes you behave a bit as the penalty is high for dropping a wheel in the silt. That makes for pretty clean racing most of the time.”
Following tomorrow’s race at 3:40 p.m. PDT, the second and final sprint of the weekend goes off at 8 a.m. PDTon Saturday.
[vc_single_image image=”17424″ img_size=”full” alignment=”center” qode_css_animation=””]
About Moorespeed: Based in Austin, Texas, Moorespeed is a full-service automotive company specializing in sales, service, repairs and restoration of luxury sports cars and competition on the track in numerous North American road racing series. Founded in 1991 in Austin by brothers David and Chris Moore, Moorespeed offers comprehensive, turn-key service in which people are just as important as parts and relationships are just as vital as results. Moorespeed’s road racing programs are designed for all skill levels, and driver development, both on and off the track, is a Moorespeed specialty. Dave Moore and General Manager Price Cobb, winner of the 1990 24 Hours of Le Mans, welcome and work with every racing customer as a member of the Moorespeed family while Winslow Mankin brings the same dedication and passion in his role as Street Department Service Manager. Moorespeed is all about the passion for high-performance automobiles and the people who drive them. A commitment to personal service and performance permeates every corner of the company. Learn more at www.moorespeed.com, contact us at (512) 474-7223, look for us on Twitter @MoorespeedTX and on Facebook at www.facebook.com/MoorespeedRaceEngineering.
Adam Saal
SaalGoodPR@GMail.com
(321) 890-2848
Recent Posts
Categories
Read Previous