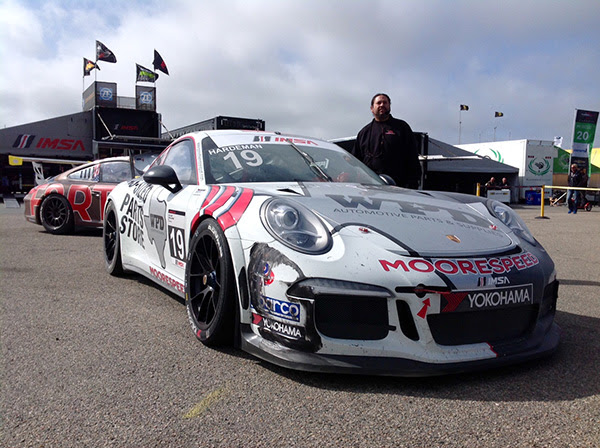 MONTEREY, California (April 29, 2016) – Moorespeed and Will Hardeman finished fourth in the No. 19 WPD/Moorespeed Porsche GT3 Cup Friday in a hard-fought IMSA Porsche GT3 Cup USA by Yokohama race at Mazda Raceway Laguna Seca.
Starting second on the outside front row, Hardeman slipped to third in the run to Turn 1 at the race start but never lost touch with the leaders.
“There was a lot of aggressive tactics happening up front, and if you’re also not an aggressor, if you skip one-beat-of-a-tenth you might lose out,” Hardeman said. “Someone might out position you on the entry or exit of a turn, so it’s just very tight tolerances up there.”
A restart with just over 20 minutes remaining also caught Hardeman out but he rebounded after dropping to sixth. He quickly raced back into the top five, moved to fourth when another competitor spun and then zeroed in on the third-place car.
“It was a good race,” Moorespeed President David Moore said. “To see him get back in the fight after not doing well at the start, he got his head back in it and started setting the fastest laps of the race. He had an epic battle with the guy in front of him, that frankly was holding him up, or I think he could have taken the fight back to the leaders.”
Hardeman was faster than the third-place competitor but couldn’t muscle his way past for the final podium spot before the checkered flag. The fourth-place finish, however, tied his previous best finish with Moorespeed last year at Virginia International Raceway.
[vc_single_image image=”17427″ img_size=”full” alignment=”center” qode_css_animation=””]
“I think today was a big learning experience being behind a guy that doesn’t give many opportunities to pass,” Hardeman said. “What was encouraging is that I definitely had the lap times,” Hardeman said. “I know that when I get in clean air I’ve got great lap time, I just need to capitalize on the opportunities when they come up.”
Hardeman’s fast charge back to the front produced the second fastest lap of the race. He will start on the outside-front-row for tomorrow’s final 45-minute race of this weekend’s doubleheader.
“He knows what he needs to do, he needs to concentrate better on the start, he’ll learn from it,” said Moorespeed President David Moore. “He’s really fast, has another race under his belt and every race he gets better, he learns from it. We’ll go back, we’ll look at the video, and we’ll look at the data, learn our lessons from it and move forward.”
Saturday’s second and final race of the weekend starts at 8 a.m. PDT.
About Moorespeed: Based in Austin, Texas, Moorespeed is a full-service automotive company specializing in sales, service, repairs and restoration of luxury sports cars and competition on the track in numerous North American road racing series. Founded in 1991 in Austin by brothers David and Chris Moore, Moorespeed offers comprehensive, turn-key service in which people are just as important as parts and relationships are just as vital as results. Moorespeed’s road racing programs are designed for all skill levels, and driver development, both on and off the track, is a Moorespeed specialty. Dave Moore and General Manager Price Cobb, winner of the 1990 24 Hours of Le Mans, welcome and work with every racing customer as a member of the Moorespeed family while Winslow Mankin brings the same dedication and passion in his role as Street Department Service Manager. Moorespeed is all about the passion for high-performance automobiles and the people who drive them. A commitment to personal service and performance permeates every corner of the company. Learn more at www.moorespeed.com, contact us at (512) 474-7223, look for us on Twitter @MoorespeedTX and on Facebook at www.facebook.com/MoorespeedRaceEngineering.
Adam Saal
SaalGoodPR@GMail.com
(321) 890-2848
Recent Posts
Categories
Read Previous