Posted at 19:12h in Moorespeed, Racing by moore3

BRASELTON, Georgia (September 29, 2016) – Will Hardeman and Moorespeed made the most of the podium momentum they built two weeks ago on their home-track in Texas with their third-straight podium finish – a career-best second-place for Hardeman – in the No. 19 WPD/Moorespeed Porsche GT3 Cup Thursday in the first round of the season-ending IMSA GT3 Cup Challenge USA by Yokohama doubleheader at Road Atlanta.

Hardeman raced from fifth on the grid to third at the checkered flag in the 45-minute afternoon sprint, but he and Moorespeed were later elevated to the runner-up slot after the competitor that crossed the line in second was disqualified.

The second-place finish – and today’s race in total – saw Hardeman and Moorespeed pick up right where they left off at Circuit of The Americas (COTA) earlier this month in their hometown of Austin, Texas.

The third-place Texas showings and the second-place result here at Road Atlanta are Hardeman’s best career finishes in IMSA competition after starting professional racing just two years ago. Hardeman showed speed from the beginning but has recently combined that with some consistency and confidence to get the career-best finishes.

“This is the speed that I have always had,” Hardeman said. “Now we are just being more consistent with it and these are the results. I feel like it’s kind of a regular thing now, and I’m not even that surprised that I am where I ended up.”

Hardeman made his first move for position at the race start, sticking to the inside from his third-row grid position to take fourth on the uphill run out of Turn 1.

“I knew that the start was going to be crucial,” Hardeman said. “Since I was starting on the inside I was thinking there might be an opportunity to get a little bit of a jump on the start, or even a jump into the out-braking zone, and just hold the inside. From there I just locked everyone out and kind of walked away from them.”

With no threats from behind, Hardeman ran in a tight group with the three other leaders and directly behind former teammate Jess Lazare, who was in third place. 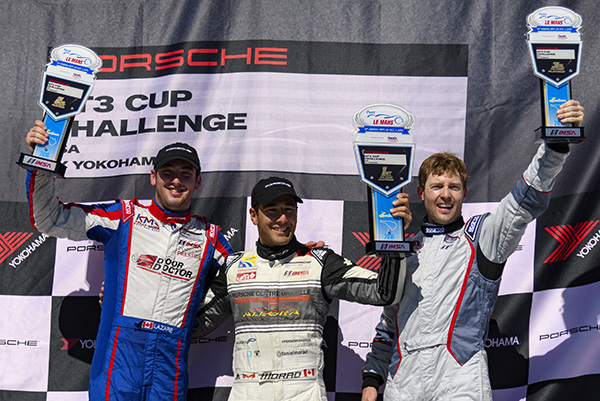 “Once we got clean air, I just played the game and tucked behind the other leaders,” Hardeman said. “I tried to catch them on the straights and dove deep into the brake zones to see if I could close a tenth here and a tenth there. Overall, I was running faster laps than the leaders near the end of the race.”

After second-place runner Zacharie Robichon – who had a rear-view mirror full of Hardeman and Lazare – dropped from contention after a severe brake lockup, Lazare and Hardeman moved into the second and third place race positions. Hardeman then went to work on zeroing in on Lazare.

“I got on the radio and told Will ‘you can get this guy,’” said Moorespeed President David Moore. “He had done everything right up to the point, had plenty of tires left and was turning some of the fastest laps of the race right there at the end. He drove a great race.”

Hardeman was steadily closing on Lazare only to see a late-race incident bring out and unwanted full-course yellow. The checkered flag followed a few laps later when race officials determined the incident couldn’t be cleaned up within the remaining race time.

“I didn’t get close enough to make a move, but if I had had about three more laps instead of the caution flag, I probably would have caught him in a draft and we could have had a little dance there at the end,” said Hardeman, who was awarded second place after Lazare’s disqualification.

Hardeman will start fifth once again in tomorrow’s final race of the 2016 season that is scheduled to go green at 9:10 a.m. EDT.

“I am looking for more of the same tomorrow,” Hardeman said. “I am going to get another really good jump at the start and work on my visualization.” 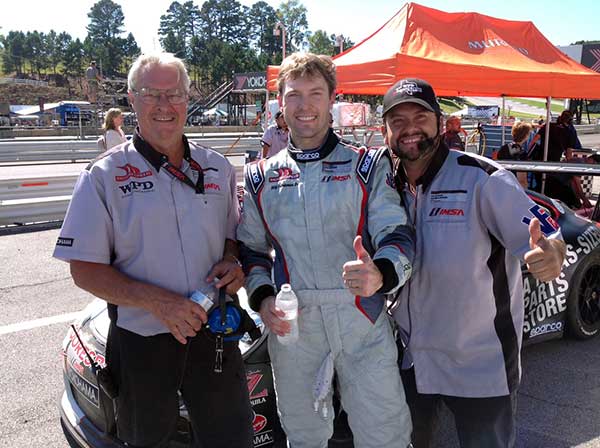