Posted at 00:24h in Moorespeed, Racing by moore3

After qualifying sixth earlier on Thursday morning in the No. 19 WPD/Moorespeed Porsche GT3 Cup, Hardeman had a great race start from the outside of row three and immediately went to work on charging to the front.

“Some guys taught me a lesson during qualifying, but during the race I had the pace of the leaders, which I was really happy about,” Hardeman said. “We have more preparation than anyone here and I came into this weekend sick and tired of missing the podium every weekend, so this is what I’m doing. I’m on a mission right now.”

Hardeman moved up two positions to fourth by the end of the first lap and raced into third one lap later. Ricardo Perez repassed him for third place a few laps later but Hardeman maintained his focus and quickly retook the position.

“Once the car loosens up it’s a little hairy but that’s just normal,” Hardeman said. “Perez got by but then I saw him getting a little loose and that’s when I smelled blood in the water. I knew he had to have a lot of heat in his tires, was probably going to make a mistake and, lo and behold, he blew the apex at Turn 12 and it just opened the door. It was like a free lunch.”

Hardeman closed slightly on eventual second-place finisher Daniel Morad in the race’s final minutes but ultimately settled for sharing the podium with him and race winner Jesse Lazare.

“This is a breakthrough moment for Will, and he drove with the two best guys out there,” said Moorespeed President David Moore. “After he got by Perez and caught back up, those three guys took off and left the field. Will and the other two took turns setting the fastest laps, lap after lap, he was really focused. We talked before the race about just taking it one corner at a time and trying not to think ahead and to just hit his marks. I told him all he has to do is use the tools he has, and if he uses those tools the results will come, and it showed today.” 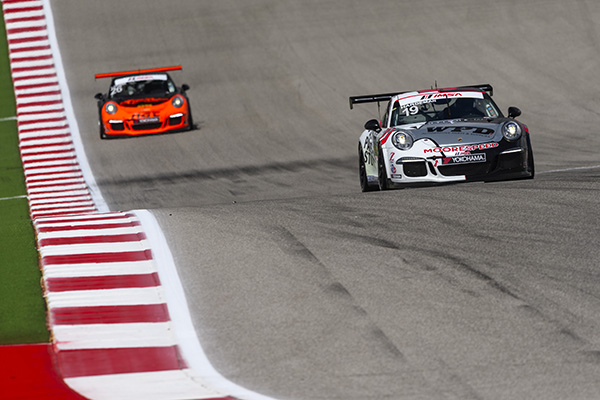 Only in his second season of professional racing, Hardeman’s previous best finishes in IMSA GT3 Cup were fourth-place results at VIRginia International Raceway in 2015 and at Laguna Seca this past May.

Read, who has a solid resume in single-seater open-wheel racing, challenged for his own podium finish throughout his debuting IMSA GT3 Cup race. He held third in the middle section of the race before taking the checkered flag in fourth, the same spot where he qualified in the Gold Cup-class No. 41 Moorespeed Porsche GT3 Cup.

“I think it went really well,” Read said. “I kind of went into it with no expectations, just wanted to learn the track really and learn how this series races. I’ve never raced against any of these guys, so I took it a little bit cautiously and kind of picked off a place here and there where I could. “Toward the end of the race I started to get a little more comfortable with the guys I was around.”

“I really like Lloyd, he’s really switched on,” Cobb said. “He’s still learning to drive a GT car over and open wheel car, because there are some differences.”

“Who better than our own Price Cobb, who started in open wheel, to help Lloyd with the transition,” Moore said. “We’ve got a race under our belt now, they are already making improvements and seeing what we still need to work on. That’s the thing about this series, it’s setup for driver development, and that’s what we do.”

Today’s race was Read’s fist in a race car with a roof.

“It was hot, and that was one big difference compared to what I’ve been used to before,” Read said. “It was a fun race overall and I’m looking forward to tomorrow night.”

While today’s opener was run in the high-noon Texas heat, Friday’s second and final race of the weekend will be a nighttime sprint starting at 7:15 p.m. CDT.

Friday’s 45-minute sprint is the only scheduled on-track activity at Circuit of The Americas for the IMSA GT3 Cup series. 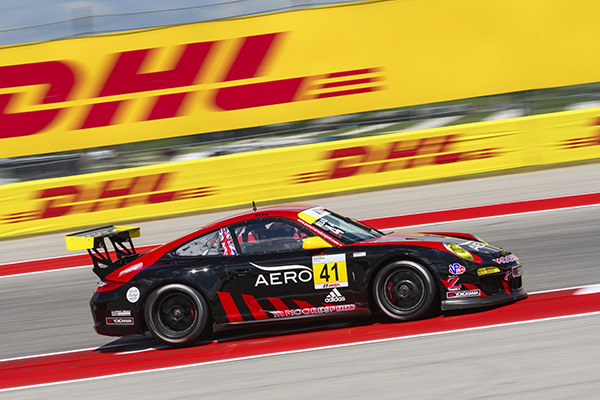 “I am really proud of Will and Lloyd,” Moore said. “They both had good races in their own rights. We have a race tomorrow but not until the 7 p.m. hour. We have nothing until then so I want the guys to enjoy it and go out and celebrate a little. They deserve it.”

– Sebastian Landy’s Gold Cup class-winning TPC Racing Porsche team may credit Moorespeed and another Austin-based racing team with assists in today’s victory. Needing an emergency engine change after Wednesday’s opening practice, Moore didn’t think twice about inviting the Maryland-based TPC team to use the nearby Moorespeed race shop. The donor engine came from Austin-based. Mosing Motorcars that quickly shipped one of their spare Porsches from across town. The engine swap was made while hundreds of guests watched with interest just steps away while celebrating at Moorespeed’s annual Welcome Party. “We didn’t do anything but put two friends together and use our space,” Moore said. “It was pretty cool to have those guys do that in the middle of our party. A lot of people hadn’t seen something like that, and to watch them thrash while you’re drinking Z Tequila and Uncle Billy’s Brewery beer with the Drew Fish Band playing made for some pretty neat ambiance.”

– Read immediately debriefed with Cobb and Car Chief Gareth Rees after today’s race. “I think where we’re losing a bit of time right now is on the high-speed, long-duration corners. As the race went on, the car started to free up more and more. So, we’re going to look into what we can do for tomorrow to make the car a little more compliant later on in the race so I can keep pushing and take advantage of those guys who are falling off toward the end.”

– Hardeman’s breakthrough could lead to more success as soon as tomorrow. “Once you’re on the podium it’s like, ‘look out,’ Hardeman said. “These guys aren’t any faster than me, and that’s the bottom line. It’s my mentality that they’re not Gods, they are just mere mortals.”

– Although a career-first in IMSA, Hardeman’s third-place finish was his third professional race podium at COTA this year. He and Moorespeed finished third in the GT3 Cup class in the Pirelli World Challenge doubleheader at COTA last March.