Posted at 19:42h in Moorespeed, Racing by moore3

– Hardeman Back in No. 19 WPD/Moorespeed Porsche GT3 Cup After Ending 2016 Racing Season on a High Note
– Moorespeed and Hardeman Testing Right Now in Texas with Potential Teammates

AUSTIN, Texas (December 8, 2016) – Moorespeed and Will Hardeman will return for a third-straight IMSA GT3 Cup Challenge USA by Yokohama season in 2017 where they will once again campaign the No. 19 WPD/Moorespeed Porsche GT3 Cup in the top-level Platinum class.

Determined to pick up where they left off after closing out 2016 with a string of podium finishes in IMSA GT3 Cup, and a top-10 showing in the Mobil 1 Supercup race at Circuit of The Americas (COTA), Moorespeed and Hardeman are shooting for nothing short of the Platinum Cup Championship in 2017.

“The entire team is really looking forward to 2017,” said Moorespeed President David Moore. “We are working to bring a few new drivers to IMSA GT3 Cup to join the team this year and hopefully announcing them very soon. Will Hardeman is back 100% and champing at the bit to get back in the saddle after a great finish to the season in IMSA that carried over into the Super Cup race at COTA.”

Hardeman ended this year’s IMSA GT3 Cup season with career-best top-three performances in each of the last two races.

The podium run began at COTA, the home track for both Hardeman and Moorespeed in Austin, Texas. Hardeman scored then career-best third-place finishes in both Texas races and two weeks later improved to a career-best second in the first round of the season-ending doubleheader at Road Atlanta. 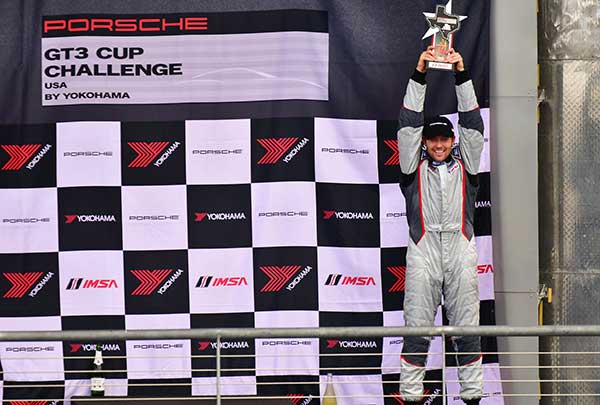 “It’s really impressive what we are accomplishing here,” said Cobb, a winning co-driver in the 1990 24 Hours of Le Mans. “Will is trading off with other potential teammates we are putting through some advanced driver training and has filled the role of both coach and mentor while also getting an early start in preparing for his own 2017 season. It’s cool to see the progress he has made when you consider that not that long ago he was the pupil.”

Moorespeed is using the test to work on advanced braking techniques and making various chassis setup changes to teach their drivers how a chassis or aero change affects the handling of the car.

“It’s as cold as the North Pole in Texas where we are testing right now but everyone is in great spirits,” Cobb said. “The program we are running the next few days is one of the team’s favorites, always challenging but fun.”

Moorespeed is scheduled to take delivery of new Porsches from the very first worldwide allocation of the new Gen 2 991 GT3 Cup race cars by the end of the year.

“Getting first crack at the new Gen 2 991 GT3 Cup is new for the USA Porsche Cup,” Moore said. “It will be the first time the U.S. gets the next generation 911 race car before others. Usually we follow a year behind Super Cup that this year receives their allocation in March.”

– Moorespeed will benefit from some valuable continuity of team and crew personnel in 2017. “We have all but one member of the race team returning for 2017,” Moore said. “Our truck driver, Chris Wakula, who also served as Tire and Fuel manager, took a management job with Ford Motor Company. We hate to lose him but it is a great opportunity for him and we wish him success.”