Posted at 00:03h in Moorespeed, Racing by moore3

First Race Weekend for Moorespeed and Hardeman in No. 19 WPD/Moorespeed Porsche GT3 Cup Since May at Laguna Seca

Rounds 9 and 10 of the 2016 IMSA Porsche GT3 Cup Challenge USA by Yokohama, the first race of the Road America doubleheader is scheduled to start Saturday, August 6, at 4:40 p.m. CDT.

The No. 19 WPD/Moorespeed team sat out the early summer rounds of the series as Hardeman and his wife, Anna, welcomed the birth of their first child, Lily Geneva Hardeman.

With both Mother and daughter doing fine, Hardeman is more than ready to get back to a track and a racing series in which he and Moorespeed, with its established driver-development program, have competed the last two seasons.

“My daughter is the second love of my life behind my wife Anna,” Hardeman said. “Being a first-time father is incredible! Having a healthy daughter on my hands has been more exciting and gratifying than anything else, rivaling and exceeding the emotional roller coaster of racing.”

While the time away from the track was certainly worth it for Hardeman and his young family, the “need for speed” was never far away.

“Obviously, time away from the races is not ideal,” Hardeman said. “The anticipation is killing me but, in the absence of racing, I dabbled with my shifter kart, spent a little time in the simulator and we tested.”

In addition to the birth of his first child, another milestone passed for Hardeman during his brief hiatus. This past Sunday, July 31, marked the two-year anniversary of Hardeman’s entry into motorsports.

He has spent the entirety of his brief but extensive racing career under the guidance of Moorespeed President, David Moore, and former 24 Hours of Le Mans overall race winner, Price Cobb, Moorespeed’s General Manager.

Together, Moore and Cobb lead Moorespeed’s driver-development program in which Hardeman has thrived the last two seasons.

“Two years from scratch has been a pretty meteoric journey in Will’s case,” Moore said. “Like any competitive sport at this high a level, there are highs and lows. Everyone knows Will can be very fast now, and everyone knows he is only getting better every time he gets on track, as he is gaining experience that only seat time in a race car can give you.”

Hardeman is happy with his on-track progress in the last two years and is now ready to take the next step into victory lane.

“I’m very happy with how far we have come in two years,” Hardeman said. “My initial goal, after first getting behind the wheel of a race car, was to get to IMSA GT3 Cup and run mid-pack. Now we have our eyes on the podium.”

Hardeman has shown podium and even race-winning pace in 2016’s opening races at Sebring and Laguna Seca.

Now, he and Moorespeed are working on developing Hardeman’s race craft. 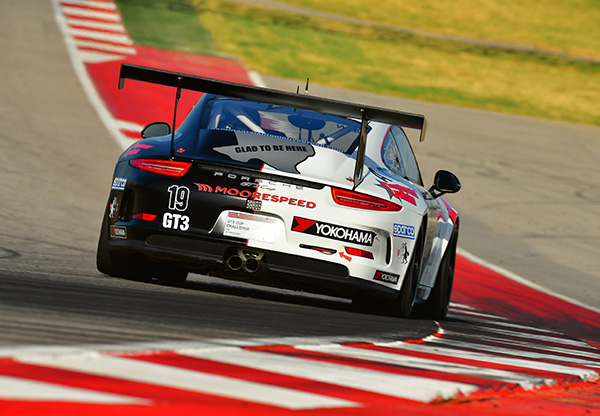 “The race at Laguna Seca highlighted Will’s strong points as well as his weak points,” Moore said. “It was far too obvious to me that he still lacked the race craft he needs to be a podium winner at each venue. We got together numerous times to review all of his data from the weekend and watched the in-car video over and over. I showed him where there were lost opportunities to pass and how the data showed he was the fastest guy on track.”

Like the Sebring opener, Hardeman once again stepped up to race with the series-leading competitors at Laguna Seca. He qualified a career-best second and finished fourth in the first race after not quite hitting the timing of the race start and restarts.

He quickly recovered and charged back to a seventh-place finish, learning another lesson in race-craft in the process.

“David and I have really shifted our focus to race craft since Laguna Seca after following Ricardo Perez and Jeff Mosing for portions of the race and not being able to get around them,” Hardeman said. “Those two guys are very skillful and know how to defend, which was a great learning experience for me.”

Part of Moorespeed’s driver development training with Hardeman after Laguna Seca was a special race-craft test at the team’s home track, Circuit of The Americas (COTA).

Moore called in factory Porsche driver Earl Bamber, the 2015 24 Hours of Le Mans winning co-driver who coaches for Moorespeed, to go through some passing drills with Hardeman at COTA, in addition to getting some rest and relaxation in Austin.

“Earl had some downtime after testing at Road America, was in the U.S. for another week, and was looking to do some Mountain Biking, so I invited him to come to Austin and stay with me and my wife Tonya,” Moore said. “He’s on the road most of every year as a factory Porsche driver who works damn hard at his craft. I knew he needed some downtime.”

As true racers, however, Moore and Bamber soon began discussing Hardeman’s race craft and what was needed to teach him the next step.

“We arranged for the club course at COTA and I instructed Earl to give Will everything he had,” Moore said. “I didn’t want him to cut any slack at all, show him as many tricks to the art of passing, but also how to keep someone behind after the pass is made. We also got into simulating tires going off, or an ill-handling car, and how to ‘legally’ block, not worrying about the line, just pure race craft.”

“Earl threw at me all the offensive and defensive moves he could,” Hardeman said. “That day in two hours I got a whole season worth of race craft. Watching last year’s Road America IMSA race has been helpful as well for passing tactics.”

The entire Moorespeed team benefited from the COTA “passing” test.

“It was awesome, the cars were neck-and-neck and neither was backing down,” Moore said. “The whole team was jacked up, you had to be there to have witnessed it. When they got out of the cars, the whole team was smiling and laughing and awestruck, including Earl. Price even said it was the coolest test he’d ever been a part of, which is saying something.”

In addition to the Saturday and Sunday races, the GT3 Cup Challenge schedule at Road America includes a pair of practice sessions on Friday and qualifying at 8 a.m. on Saturday.

All on-track sessions, including both races, will be broadcast on www.IMSA.tv with live timing available at www.IMSA.com.