16 Jun Moorespeed Builds on Last Month’s Breakout Win by Corey Fergus and the No. 00 US LED/Byers/Moorespeed Porsche GT3 Cup Team

Posted at 20:11h in Moorespeed, Racing by moore3

AUSTIN, Texas (June 16, 2017) – A busy schedule on and off the race track has seen Moorespeed and team drivers Corey Fergus and Will Hardeman maximize the momentum of the team’s victory last month on its home track of Circuit of The Americas (COTA) where Fergus drove the No. 00 US LED/Byers/Moorespeed Porsche GT3 Cup to a convincing IMSA GT3 Cup Challenge USA by Yokohama race win, Saturday, May 6.

The victory, the first for Fergus in a professional Porsche GT3 Cup racing series, has been the springboard for more testing for both Moorespeed drivers as well as an extended promotional appearance for the No. 00 and Hardeman’s No. No. 19 CAG/Moorespeed Porsche GT3 Cup at Byers Porsche in Columbus, Ohio.

“The folks at Byers Porsche are salt of the earth and true racers,” Moore said. “They sent down a large group for the race at COTA, and then Corey pulled off the win, which made it even more special. We are truly blessed to have them as part of our team. Without their help we would not have even been at Watkins Glen testing, so we can’t thank Kevin King and everyone at the Byers Import organization enough. We are really glad the cars can be on display in Columbus for all of our fans in the Ohio area to come and see until we head back to The Glen.”

In addition to being a professional race car driver, Fergus is one of the leading Porsche Brand Ambassadors at Byers, which owns the No. 00 and is one of the main backers of Fergus’ first year effort with Moorespeed.

“The dealership is very involved with my racing,” Fergus said. “They own the race car, so it’s only fair that they get to display the car in the showroom at the dealership for a few weeks. It’s pretty awesome to see the two cars every day at work. It’s definitely a talking point with customers and brings racing into the conversation. My General Manager Kevin King and David Moore are both very supportive of my racing career so we all make a great team.” 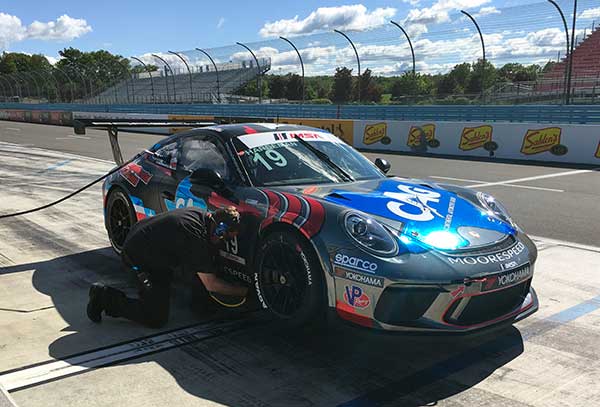 “Our goal at Watkins Glen was to keep the rust off after COTA and continue to learn and gel as a team,” Moore said. “We are fortunate to be able to test on a track where we are racing next, all the time being mindful that Watkins has a big bite if you make a mistake.”

The test was the first time Moorespeed and its pair of drivers have visited Watkins Glen since the track was repaved in late 2015.

“The biggest gains at the test came mostly from line polishing and car setup,” Hardeman said. “The new, grippier surface at Watkins Glen is hard on the Yokohama tires, but it does rock and provides for some superfast cornering.”

Moorespeed has now tested in advance of the IMSA GT3 Cup events on each of the four tracks hosting the year’s first four race weekends, which includes Sebring International Raceway, Barber Motorsports Park and COTA, in addition to The Glen.

“Getting the opportunity to test before the race just makes sure we show up ready to go right out of the gate,” Fergus said. “It went well. We had the chance to test a few different setups and think we have a pretty good idea of where we need to be at the end of the month. It was my first time on the new track surface. It’s always been one of my favorite tracks, and now it’s so smooth and grippy!”

The ever-changing weather for which the Watkins Glen area is known worked out well for Moorespeed at the test.

“In my opinion, we kept from falling behind more than making gains as half the field was testing with us, including all the front runners,” Moore said. “Both Corey and Will ran very strong in inclement weather that rapidly changed, very typical for Watkins Glen. We actually started in the wet on day one and then it began to clear, so the guys drove the track as it began to dry out. The conditions were actually more of what you would come to expect at Watkins Glen, which afforded us good testing on wet and dry setups, as well as cold to hot.” 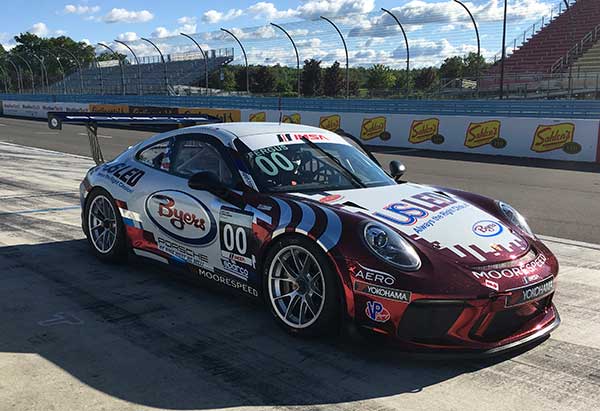 The Glen test followed a complete rebuild of the No. 19 after the Porsche was destroyed when Hardeman was taken out from behind during Friday’s first race of the COTA doubleheader weekend. Hardeman was unhurt in the incident but unfortunately wasn’t able to race in the Saturday final round at COTA.

“The rebuild was a total team effort for sure,” Moore said. “Corey’s crew had the engine out and crated the Monday after the race weekend where it was picked up later that same day. The team at Porsche Motorsport North America did a phenomenal job of expediting everything we needed. We had a replacement chassis delivered to our door along with all of the replacement parts needed within one week. Crew Chief Robin Hayes flew in the Tuesday after the chassis arrived, and along with Corey’s crew of Jason Pettice and Car Chief Gareth Rees, they had the car built by Friday. We did a shakedown run at COTA a few days later, prepped Corey’s car, and packed up and headed to Watkins Glen for the test.”

– After the quick shakedown at COTA, the two-day test at The Glen was Hardeman’s first substantial run in his rebuilt Porsche. “I think the Moorespeed crew fixed my car as well as the Porsche factory builds them,” Hardeman said. “Because of their craftsmanship, commitment to the team and the best tools, we had zero issues at the test. The car felt laser perfect and as a result we ran some of the fastest laps of the test.”

– Moorespeed had just the right amount of rain for the two-day test at The Glen. “We got really lucky with the weather for the test,” Fergus said. “We got to test in the rain, changing conditions, and dry. That’s the perfect test.”

– Moorespeed is supporting the joint initiative between IMSA and Watkins Glen International inviting teams to display patriotic-themed race car liveries during the overall IMSA race weekend at The Glen, June 28 – July 2. Each Moorespeed entry will proudly carry large American Flags on the roof of each Porsche, joining their fellow IMSA competitors in acknowledging the Fourth of July and showing appreciation for the U.S. Military during the holiday race weekend.

– With his COTA victory and two more podium finishes in the span of the year’s first six races, Fergus has moved to third in the IMSA Porsche GT3 Platinum Cup championship standings. Fergus has 87 points, trailing only fellow 2017 race winners Trenton Estep, who is second with 106 points, and Jake Eidson, who currently leads with 113 points.

– One of several racing teams based in Austin, Moorespeed is always quick to help out one of their fellow competitors when needed. They had the favor returned before The Glen test. “We were missing a couple key items after the rebuild but CJ Wilson Racing, just down the road from us, was kind enough to loan them to us so we could head off to Watkins Glen,” Moore said. “Our team did a great job, were very organized and wasted no time. We even had time to wrap the car so we could display at Byers with Corey’s car, which is quite elaborate.”